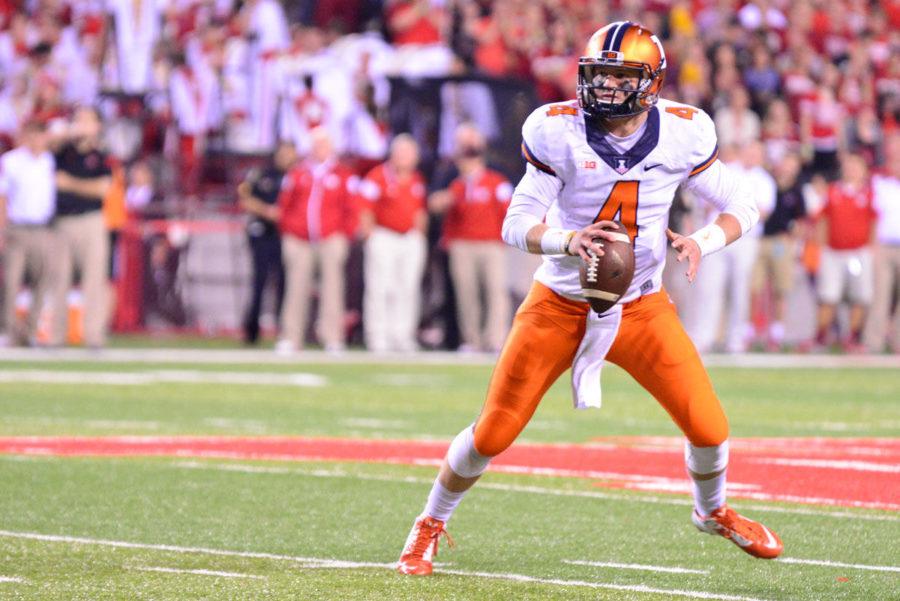 Illinois’ Reilly O’Toole (4) attempts to pass the ball during the game against Nebraska at Memorial Stadium in Lincoln, Neb. on Sept. 27. The Illini lost 45-14.

It’s been two of the toughest days in Tim Beckman’s time at Illinois.

The Illini head coach learned Sunday that his starting quarterback Wes Lunt would miss four to six weeks with a fractured fibula, one day after losing a must-win game against Purdue.

Beckman said there will be competition in practice between quarterbacks Reilly O’Toole and Aaron Bailey this week, although O’Toole is likely to get the start against Wisconsin on Saturday.

O’Toole was the starter in a 45-14 loss to Nebraska two weeks ago. The senior went 17-for-38 for 261 yards with a touchdown, but threw three interceptions.

Bailey has yet to play this season, with the Illini coaching staff hoping to have him redshirt. Lunt’s injury changed those plans Sunday.

“The opportunity we had to possibly redshirt him is not going to be able to occur now, because he’s got to help us win football games,” Beckman said.

Beckman said Lunt is in a medical boot and will still travel with the team to provide leadership on the sidelines.

Lunt was cleared by doctors to go back into Saturday’s game following his injury, but the Illini coaching staff elected not to risk Lunt’s health further.

“You could tell Wes was injured when he came off the field,” Beckman said. “You’ve got to do what’s best for the student-athlete and that’s the bottom line.”

Beckman said there will continue to be competition between sophomore David Reisner and junior Taylor Zalewski this week for the starting kicking spot.

Zalewski struggled in the beginning of the year for Illinois, missing two field goals, and lost the job midway through the game against Texas State after missing a point after attempt.

Reisner also missed a point after attempt Saturday against Purdue and had a field goal blocked late in the fourth quarter. Beckman said the blocked field goal was due to Reisner, not blocking up front.

“It wasn’t high enough and there wasn’t enough penetration,” Beckman said. “Other than me going out there and kicking it, we’re going to have to pick who’s being the most successful during practice.”

Tackling the issues on defense

Illinois gave up five plays of more than 40 yards against Purdue in Saturday’s 38-27 loss, something Beckman credits to missed tackles on defense.

In total, Illinois allowed 293 yards to Purdue in those five plays.

“We’ve got to be able to tackle,” Beckman said. “It’s something you have to practice. You have to rep it.”

The Illini defense ranks worst in the conference and 112th in the country, allowing an average of 482.3 yards per game. Opponents have rushed for 14 touchdowns against Illinois in six games.

“When we give up the big plays, guys want to try and do too much to stop them,” linebacker Mason Monheim said. “We need to be consistent. Every guy has a job on every play and when one guy doesn’t do that, the opportunity to hit a big play is there.”

Illinois has yet to stop an opponent inside the redzone on 26 trips and ranks 119th in the country in rushing defense. Senior defensive lineman Austin Teitsma said the defense must push itself to perfect its fundamentals in practice and to fulfill personal responsibilities.

“It just comes back to worrying about what you, individually, have to do on the field,” Teitsma said. “We’ve been around this game a long time and we need to trust each other that everybody’s going to be where they need to be.”

Illinois’ defense will face another tough challenge Saturday, going up against Wisconsin running back Melvin Gordon III, who leads the country in rushing yards per game (174.2).

Beckman said the team will be told exactly what it needs to work on in practice this week, making it apparent the Illini need a quick turnaround to avoid a string of conference losses.