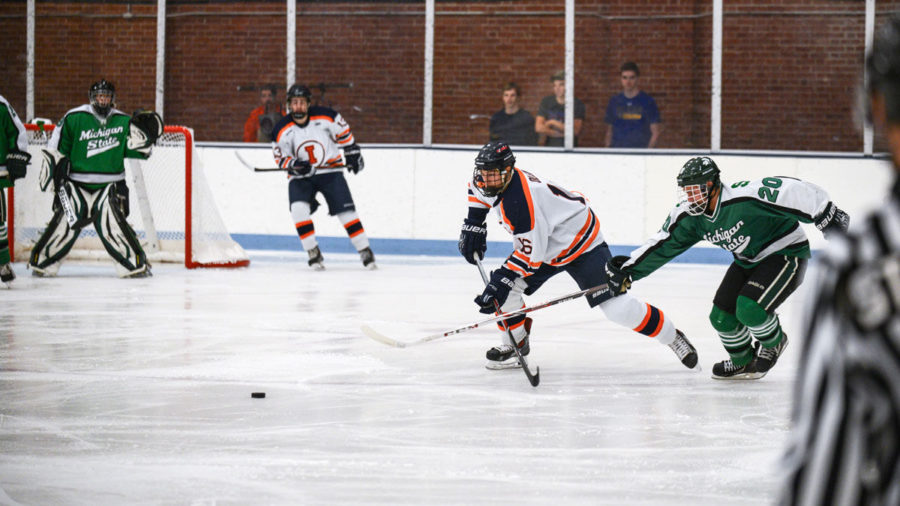 Illinois’ John Olen and Michigan Sate’s Michael Ferrantino clash sticks as they fight for control over the puck at the Illinois Ice Arena on Sept. 27.

During the grind of the season, an off-weekend is hard to come by for the Illinois hockey team.

The Illini (6-1-0-0) are in the middle of a two-week break from competition, and head coach Nick Fabbrini hopes it will give his players a chance to get healthy again. The team is fighting the injury bug, with five players out for various ailments.

“We have a lot of guys that are hurt with big injuries and small injuries,” Fabbrini said. “We are really trying to get healthy this week and still keep our game legs underneath us.”

Illinois’ six-game winning streak was snapped Saturday by Colorado State, which the Illini defeated 7-0 the night before.

The loss exposed an issue that junior John Olen said the team has struggled with in the past: staying focused for the weekend’s second game.

“It’s all about focus from one game to the next,” Olen said. “We had trouble with that my freshman year, winning Friday and then losing Saturday. I think we just need more game time preparation. We need to put in a consistent 60 minute effort both nights.”

Olen, a center, believes if the team can maintain its focus, it has the potential to be great on the offensive side of the puck. The team demonstrated its ability on Saturday by scoring seven goals, three of which were assisted by Olen.

Aside from the issue of focus, Fabbrini did see results from practice shine through on the ice. The team displayed a greater sense of discipline over the past weekend with less costly penalties, which have been an issue for the Illini this season.

Fabbrini also saw his players improve on the forecheck, which gives the Illini more opportunities to control the puck in the offensive zone. Coupling that with the team’s speed creates more goal-scoring opportunities.

“If we can put the pucks in good areas, we are a tough team to contain out of the offensive zones because of the speed this team has,” Fabbrini said. “I think that we did a good job of pressuring their defense and forcing turnovers.”

The members of the team who are not recovering from injuries will be going through a series of high-tempo practices this week, before actual game-planning for the home game against Michigan-Dearborn on Friday, Oct. 17. The team will go another month before it gets another two-week break, so Fabbrini intends to take full advantage of the rest time the team has now.

“I don’t think there is anything new we want to install this week,” Fabbrini said. “Right now, we are just focusing on getting healthy and making sure we are ready to go against Michigan-Dearborn.”