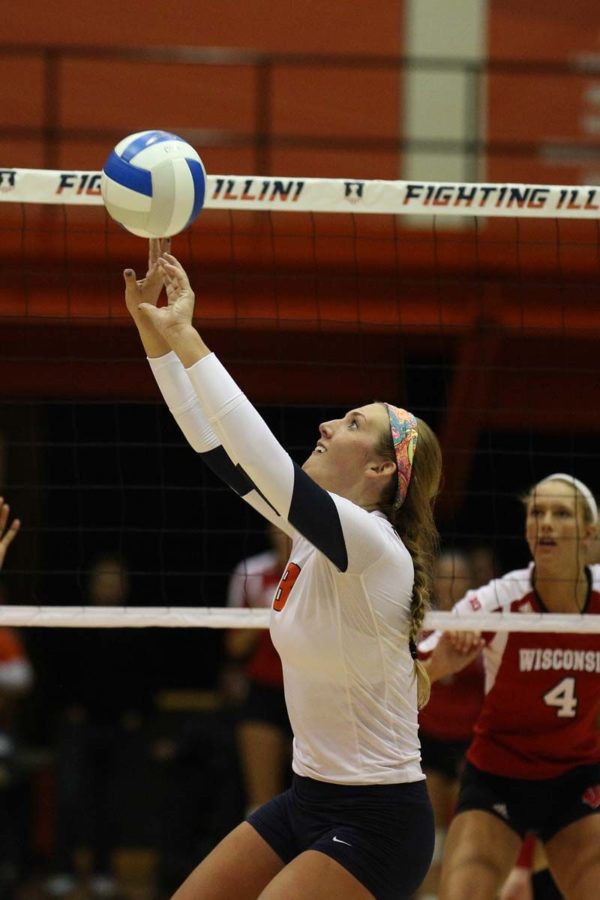 Illinois’ Alexis Viliunas is the team’s main setter in its return to the 5-1 rotation. The Illini are 3-0 since the switch from the 6-2 rotation they started the year with.

For junior setter Alexis Viliunas, the awards don’t mean much.

While it’s nice for Viliunas to be recognized among some of the best setters in the Big Ten, it’s better that the Illinois volleyball team has found a rhythm.

“I’m pretty happy with it for the most part,” Viliunas said of her play. “I think I’m getting back into it, sort of. Getting used to running the 5-1.

“It’s nice to be in rhythm. Sometimes, running the 6-2, when you get in rhythm you’re subbed out. It takes a little bit to get back into it. I like the rhythm that we’ve been in with the 5-1.”

The No. 10 Illini (14-5, 6-2 Big Ten), started the season with a new 6-2 rotation system, but switched back to the 5-1 system they played last year. With the change came the wins and the accolades for players like Viliunas, who was named Big Ten Setter of the Week for her performance over the week.

Viliunas set and reset her season-high in assists during the week as she started it with a 54-assist performance against Iowa on Wednesday and finished it up with a 56-assist showing at then-No. 13 Nebraska on Saturday. Viliunas’ previous season high for assists was set the weekend before, when, in the first match in which the Illini played the 5-1, she tallied 47.

Illinois is 3-0 since the switch. Much of the success can be attributed to the comfort level the team and its setter have with the old system.

In the 6-2, Viliunas was one of two setters who transitioned in-and-out of the match. With the 5-1, Viliunas has reassumed her role as the team’s lone setter and orchestrator of the game plan.

“(I’m) actually running an offense the whole match, rather than just those three rotations,” Viliunas said. “I’m happy with it and hoping to get better as we practice it more and I get more used to it.”

Although the opportunities to get a kill haven’t come often, Viliunas has recorded some kills which she says may be her favorite part of a match. She recorded three kills against Penn State and Nebraska and another two against Iowa. Before the system switch, her lone kill on the season had come in the Big Ten opener against Maryland.

“I mean, you have a bunch of hitters who get all of the recognition, which is awesome,” she said. “I don’t need recognition at all, but sometimes getting a few kills makes you feel a little bit better.”

Viliunas said there’s also a bit of a competition between setters as to who can record the most kills.

Although Viliunas has received recognition for her offensive output since the system switch, head coach Kevin Hambly said her impact on defense is more impressive. While in the front row, Viliunas helped hold Nebraska sophomore outside hitter Kadie Rolfzen to a .046 hitting percentage.

“More importantly, Lex did a good job of defending,” Hambly said. “She was matched up on one of the better outsides in the league in Kadie Rolfzen and did a really nice job against her.”

While Hambly praised her defense, senior outside hitter Morganne Criswell praised Viliunas’ sets as of late. Criswell, after being shut out against Penn State, bounced back with 17 and 21 kills against Iowa and Nebraska, respectively, and said that Viliunas’ play contributed to her own recent success.

“Her sets have been really great and she’s been working really hard on it so that helps a lot when the sets are on point,” Criswell said.

So while the weekly awards and the recognition is nice, Viliunas hopes the Illini keep their level of play up no matter what system they are in.