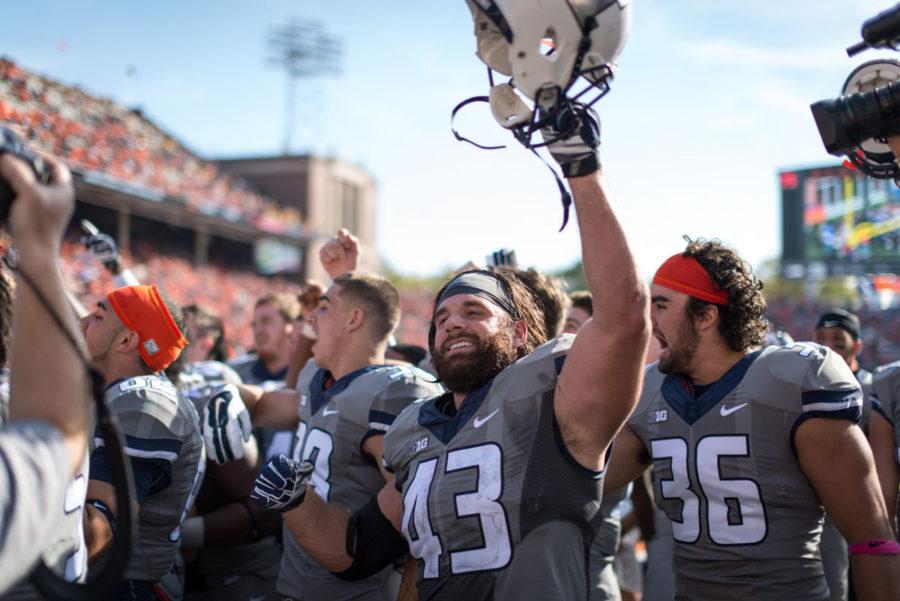 Illinois' Mason Monheim (43) raises his helmet after the homecoming game against Minnesota at Memorial Stadium on Saturday, Oct. 25, 2014. The Illini won 28-24.

When cornerback V’Angelo Bentley scored the game-winning touchdown in the fourth quarter, he attempted to do a dance his teammates were begging him to do for a long time. He wasn’t sure if he got the dance moves right, but he does know the work on the practice field paid off.

“It was just a good feeling,” Bentley said. “We work on scooping and scoring and tackling and stripping. Just to see all of that pay off was a great feeling.”

Bentley’s 12-yard touchdown off a fourth quarter fumble secured a 28-24 Illinois Homecoming win over Minnesota after the Illini fell behind in the third quarter. With the fumble recovery, Bentley became the first player in school history to return a kick, a punt, an interception and a fumble for a touchdown.

It was Illinois’ first Big Ten win of the season and ended the Gopher’s undefeated three-game conference streak.

The Illini scored another touchdown in the first quarter and held the Gophers to a field goal at the end of the first half.

But, Illinois struggled in the third quarter.

Linebacker Mason Monheim intercepted a pass from Minnesota quarterback Mitch Leidner on the first play of the second half. But the Illini would fumble the ball and the Gopher’s capitalized right with a 52-yard touchdown pass. The touchdown started a quarter that saw Minnesota score three touchdowns.

“The third quarter was my fault,” head coach Tim Beckman said. “I think I exploded on the sidelines a little bit, too much at the officials. I even threw my headset, which I hadn’t done in quite some time. I lost my cool.”

But Illinois came out strong in the fourth quarter and fed off the energy of an electric crowd and a strong senior presence.

“I would say the first couple years, earlier in my career, Homecoming, I didn’t really see it as anything,” defensive back Earnest Thomas III said. “When you’re a senior, it means so much more. Just playing in front of that crowd today. That crowd was on their feet the whole game, they had energy. That game was energy.”

In front of a crowd of 44,437, fans watched as seniors played their final Homecoming game. Illinois forced a missed field goal. But with the Illini offense struggling and trailing the Gophers by three, it was Bentley’s fumble return that changed the tide.

The win was the first time Illinois beat a ranked opponent in the AP poll or coaches poll since 2011. Minnesota is ranked No. 24 in the USA Today Coaches Poll.

And the work in practice finally came into play, according to Beckman.

“This isn’t about Tim Beckman and it isn’t about Bill Cubit or Timmy Banks,” Beckman said. “This is about the 105 football players and, as I said, this is what you’re in the profession for. They worked their keesters off, I could say something else but they did work those off. I can’t tell you how proud I am of the way that they played.”