Illini football looks to block out distractions vs. Penn State 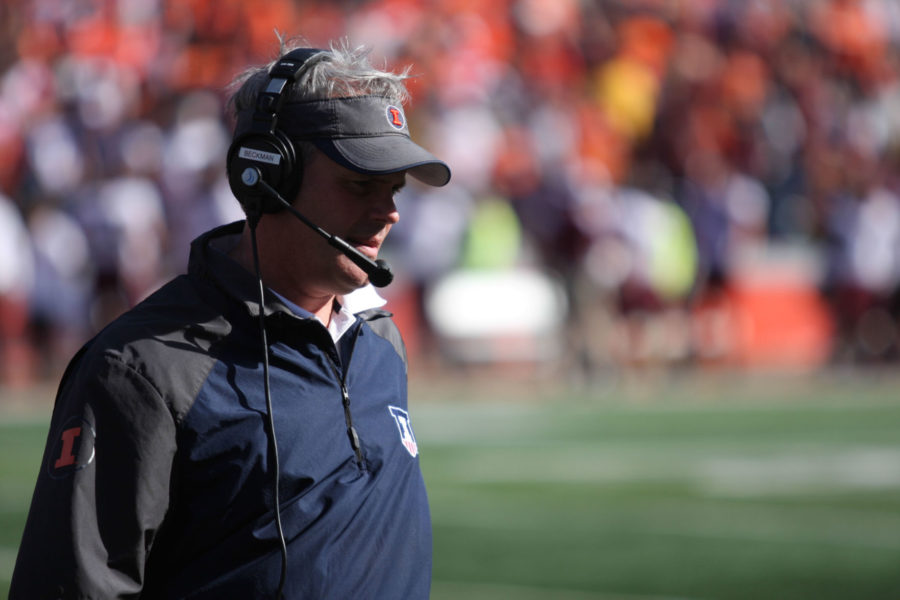 Illinois head coach Tim Beckman may be coaching his last game at Memorial Stadium against Penn State on Saturday.

The off-the-field distractions are abundant. The on-the-field necessities are even more so.

With a 4-6 record, the Illini football team needs to win its final two games to reach bowl eligibility — something the program has failed to do since defeating UCLA in the Kraft Fight Hunger Bowl in 2011.

But with the looming suspicions of head coach Tim Beckman’s firing at the end of the season and another losing year becoming more and more possible, there are distractions all around the program heading into Saturday’s game against Penn State.

“Kids are more resilient nowadays than they’ve ever been,” offensive coordinator Bill Cubit said. “These kids have got a lot going on. The kids just move on, which in my mind is a good thing. Football’s an important part of everybody’s lives, but family’s the most important thing and your education’s pretty important too.”

Cubit said technological differences between his generation and the players’ is a major factor too, with players being able to jump on social media following a game or get distracted from a loss by going on their cellphones or watching any of a thousand television channels.

The coordinator’s offense saw uncharacteristic struggles last week in a 30-14 loss to Iowa. Starting quarterback Wes Lunt returned from a five-week absence and the expectations for the Illini passing game were high.

The quarterback was pulled from the game in the fourth quarter, throwing a season-low 102 yards for just one touchdown with a 56 percent completion rating. It was the worst he’s been all season.

Beckman said the offense didn’t play up to expectations.

“It’s been more on us at times offensively than it’s been on somebody doing something to us,” Beckman said. “We’ve just been hurting ourselves offensively.”

Lunt said the Illini will bring a greater level of intensity the rest of the season, knowing they need to win out. But Illinois needs enough intensity to roll past a Nittany Lions defense that ranks fourth in the country in points against (16.2).

The Nittany Lions’ secondary is the most threatening to Illinois’ offensive scheme, which focuses heavily on passing the ball when Lunt is taking snaps. Penn State is 10th in the country with 15 picks.

On the opposite sideline, Illinois’ defense ranks worst in the conference, allowing 493.5 yards per game.

“We’re just getting beat,” Beckman said. “We’ve got to become better up front.”

Penn State quarterback Christian Hackenberg will look to pick apart an Illini defense that has made a habit out of allowing big plays.

Coming off a freshman season where he broke school records for completions (231), passing yards (2,955) and touchdowns (20) as a freshman, Hackenberg has had more difficulty in his second year. The sophomore has thrown 14 interceptions with just seven touchdown passes.

“He’s still a great player,” defensive coordinator Tim Banks said. “I think his surrounding cast is just a little bit different than what he had last year.”

But while the Illini players look to focus on one game at a time, the team’s attention is being spread out by whatever the consequences might be if Illinois doesn’t win its next two contests.

“This program’s not about the media, it’s not about me — it’s not about anybody other than the guys that are out there playing,” Beckman said. “You can bash or you can do whatever you’ve got to do, but that ain’t helping the 18- to 21-year-old

And with 18 seniors walking into Memorial Stadium for their final home game, the effort is expected to be there, fighting to reach a bowl game for the first time in three years.

“We’ve got to continue to build this program,” Beckman said. “And this program needs to be continually built.”

The looming question is whether that process will continue with or without Tim Beckman.