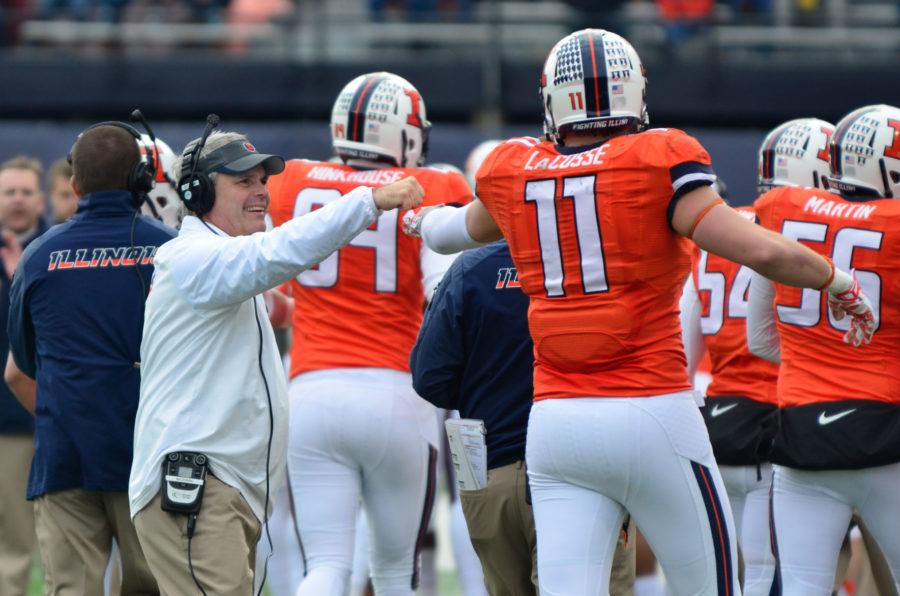 Illinois' head coach Tim Beckman congratulates Matt LaCosse (11) after a touchdown during the team's game against Penn State at Memorial Stadium on Nov. 22, 2014. Several former and current players tweeted out support for Beckman on Thursday.

Illinois head coach Tim Beckman did not name a starter for Saturday’s bowl-or-bust game against Northwestern. Beckman said a decision would be made Thursday.

Rather than Wes Lunt, who started against Penn State, it was backup Reilly O’Toole who came in late in the first half against the Nittany Lions to lead a touchdown drive and carry the Illini offense.

Beckman said all three quarterbacks, including Aaron Bailey, bring a different dimension to the game and there is still a possibility Illinois will use a dual-quarterback system on Saturday.

“We haven’t been outstanding at running the football this year,” Beckman said. “This isn’t Josh’s (Ferguson), not Donovonn’s (Young) or Devin’s (Church) fault, it’s a team thing.”

Illinois has rushed for 1,114 yards compared to 2,771 passing yards. Young rushed for 62 yards in the Penn State game, a season high after starting in place of Ferguson.

Illinois’s postseason hopes come down to one last game on Saturday against Northwestern. While the Land of Lincoln rivalry trophy is on the line, both teams will be fighting for bowl eligibility, with each team at a 5-6 record.

“It’s going to be like a bowl game for a bowl game,” Earnest Thomas III said after Saturday’s win. “For us, we don’t have class this upcoming week, we get a chance to fully lock in on this game. It’s your rival, it’s a team upstate. It’s a team that, myself, I probably can’t stand this team out of any other team that we play. They’re probably at the top of my list — not in a good way.”

Thomas said the team’s energy and will power should not be a problem on Saturday. It will about not letting the moment get to the team and remembering that is still just a football game.

Coaches and players are focused on giving it their all on Saturday. This includes blocking out the negativity surrounding Beckman’s future at Illinois.

“I would be a fool if I went and Googled some things or listened to what other people are saying right now, at this point in my career,” Thomas said. “It’s really not going to benefit me or hurt me or lose any sleep. I’m just focused on us.”

David Reisner was named co-Big Ten Special Teams Player of the week for his performance in Saturday’s 16-14 win against Penn State. Reisner kicked the winning field goal in the last seconds of the game.

Illinois had only made two field goals all year and Reisner was only 1-for-3 on the season. But he made three field goals Saturday and finished with a career-high 10 points.

He went 3-for-4 and only missed a 50-yard attempt in the fourth quarter that would have put the Illini ahead with a little less than three minutes to play. But he came back with only eight seconds left to kick the game winner.

Coaches and teammates had faith in their kicker as they greeted him with uplifting words on the sideline after he missed the 50-yarder. They knew he would likely get another shot.

Beckman had a belief in Reisner because of the situational kicking during the week leading up to the game. They had practiced with two-minute drills and Reinser nailed two kicks, according to Beckman.

“The credit goes to David, because he’s the one that stepped up and did it,” Beckman said. 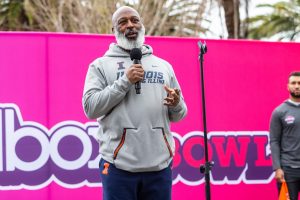