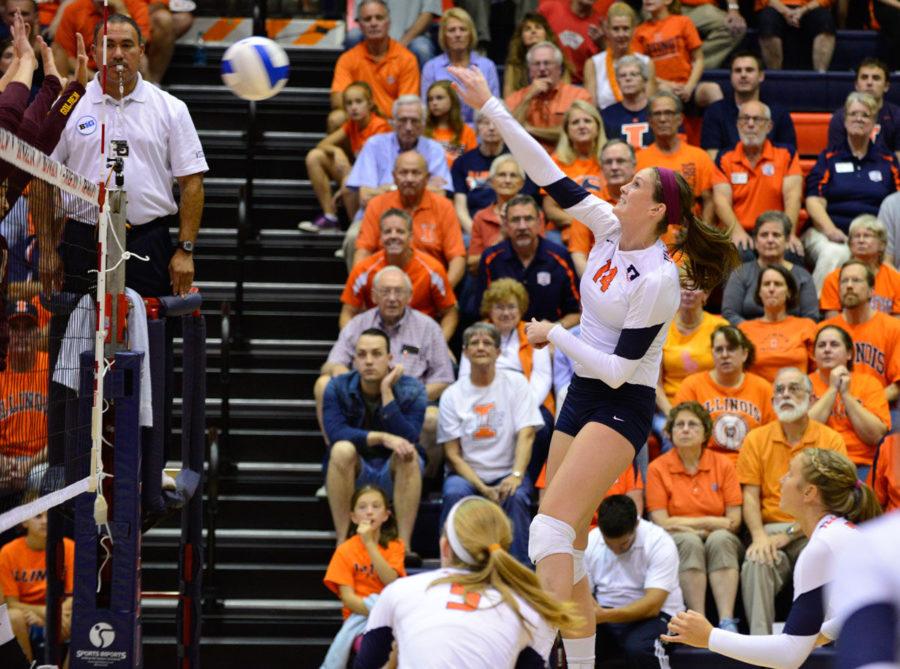 Illinois’ Liz McMahon spikes the ball against Minnesota at Huff Hall on Oct. 1. McMahon and her fellow seniors will play in their final home game at Huff on Saturday.

The Illinois volleyball team just finished a sweep of Minnesota at Huff Hall behind another clutch performance from senior Liz McMahon.

She put away four kills, recorded two blocks and an assist in the final six points of the first set, then notched her only two service aces of the season late in the second set to propel the Illini their seventh straight victory at the time.

Her 19 kills and seven blocks on the day are both season-highs.

As a nearly-packed Huff Hall crowd filters out after the final whistle, McMahon and her teammates work their way over to the Illinois student section, the Spike Squad, and lock arms for the singing of “Hail to the Orange.” Fans stroll by on their way out and offer congratulations on the performance or snap a quick picture.

The match couldn’t have been any more different than when McMahon faced the Gophers in her first Big Ten match as a freshman in 2011.

That day, McMahon played two sets without a kill, with three errors on five attempts.

As McMahon enters her final home match in Orange and Blue on Saturday, her transformation in Champaign from a wide-eyed, blue-chip recruit to clutch performer has been a long process.

On the court, McMahon has all of the characteristics of a clutch player. At the end of sets and in the waning points of a match, the Illini seem to follow advice from her father, Kevin McMahon: “When things get tough, you go to Liz.”

Although on paper, being clutch is hard to prove, head coach Kevin Hambly says he believes in certain players in big moments and McMahon is one of them.

Look no further than the national semifinal against USC in 2011. As a freshman in her first NCAA tournament, McMahon put away five kills on eight attempts in the decisive fifth set, which helped send the Illini to their first-ever national championship game.

“I don’t even know if it’s pressure, but it’s knowing the team needs something right now, like we need a point right now,” McMahon said. “That kind of is what motivates me. I wouldn’t say it’s pressure from the outside because I don’t do so well with that.”

That external pressure started early, during her high school career, as McMahon was touted early on to be a top-flight prospect.

McMahon came to campus ranked as the No. 3 player in her class, according to PrepVolleyball.com, although Hambly viewed McMahon as a raw project, rather than a polished product. At 6-foot-6, McMahon already had elite-level size and length, but she was making the transition from high school middle blocker to right side hitter at Illinois.

She was the highest-ranked player Hambly had ever scored and her class, also ranked No. 3 in the country, carried the same billing. With those accolades comes expectations even bigger than McMahon’s formidable wingspan.

“I just felt like from the second I came here, everyone had a predetermined expectation of me,” McMahon said.

Though she started 34 times and appeared in all 37 of the Illini’s matches, McMahon struggled at times. Hambly wasn’t afraid to pull the freshman out during particularly rough patches.

“She didn’t ask for that, to be ranked No. 3, she didn’t want that,” Hambly said. “Especially early on, she tried to ignore the rankings, which is impossible because that’s all everyone wanted to talk about.”

As the season progressed, Hambly played McMahon with a short leash, taking her out at times to preserve her confidence, but then also giving her enough opportunities to develop some of her raw talent.

The Illini would fall to UCLA in its first-ever appearance in the national championship game, and the following season was set to be a changing of the guard.

Gone were All-Americans Colleen Ward and Michelle Bartsch, but the expectations remained. Illinois had set a new high-water mark and the next wave of talent, McMahon and classmate Jocelynn Birks, were expected to still compete at a high level.

It hardly went that way.

The Illini missed the NCAA tournament with a 14-16 record and finished eighth in the Big Ten. A brutal schedule kept Illinois under .500 and out of tournament eligibility.

“To go from the highest high to the lowest low was really hard,” McMahon said. “It felt like we were disappointing people. We were just runner-ups and we couldn’t even get into the tournament.”

As freshmen, McMahon’s class missed out on spring practices where teaching and technique refinement helps to develop players. After the national championship run, the Illini simply expected they could get back to the pinnacle.

“We say we hopped on a moving train (in 2011). I don’t think I, or the other seniors, knew what it took to get to that level,” McMahon said. “We just came in and things were great. We didn’t get to see the behind-the-scenes process it took to be great and be No. 1 in the nation for a while.

“That’s definitely some of the reason the following season was so poor. We didn’t understand the work you had to put in.”

McMahon said the culture around the Illinois program needed to change. Not only was this work ethic and volleyball-related, but she said the players wanted to establish what kind of people they wanted to be.

“It wasn’t a good foundation for anything and we got to start over and figure out how we were going to operate as teammates and humans before we get to the volleyball aspect,” McMahon said.

Hambly gave the girls assignments to help people — at least three per day, whether it was simply holding a door for someone, or something bigger. There was accountability in the locker room as each player was responsible for calling out someone for talking behind another’s back and forced them to address it face-to-face.

The Illini solidified their locker room with a trip abroad.

During the summer of 2013, the Illini took a nine-day trip to Italy to face off with international competition as well as to grow as a team.

“We went Italy and that really solidified it for us because it was an experience that was really important for our culture,” McMahon said. “It’s my favorite part about here because we’re so committed to it.”

Losing only two players off of a team that made it to the Sweet 16 a year ago, the Illini have their sights set as high as possible looking toward the NCAA tournament.

This season, Illinois knocked off Penn State and Nebraska on the road — the first team since 1991 to accomplish the feat in one season — and McMahon is one of 10 finalists for the Senior CLASS Award.

The CLASS Award is an acronym for Celebrating Loyalty and Achievement for Staying in School and its criteria are based in the categories of community, classroom, character and competition.

McMahon ranks ninth in the conference in points and 12th in kills per set. She also boasts a 3.85 GPA and has twice been named Academic All-Big Ten.

While personal achievement is always secondary to team achievement, the award still resonates with McMahon.

“This award is pretty special because it encompasses all four years and then the off the court stuff that I take a lot of pride in,” she said. “It’s a lot more than just stats, which some awards are. It’s pretty special.”

McMahon currently leads the popular vote, which constitutes one-third of the total vote, while the rest will be decided by Division I coaches and national media members.

Entering its final home match at Huff Hall, the Illini are poised to make a run in the tournament. Barring an unusual ruling by the selection committee, Illinois should host the first two rounds at Huff.

But fellow senior Morganne Criswell is hampered by a knee injury and Jocelynn Birks left Wednesday’s match against Nebraska with an injury; the Illini will need to lean on McMahon more than ever down the stretch.

As she grew as a player and a person at Illinois, McMahon has gotten over the expectations that hampered her as a freshman.

“Who knows if I lived up to that, who’s to judge that?” she said. “I tried everything that I could and I just want to be remembered as someone who put it all in the program. … I’m at peace knowing that I’m trying. I’ve done all the things that I can, so what if I’m not still the No. 3 player.”

The expectations are still there. Hambly said the Sweet 16 is the bare minimum this team should achieve this season.

The Illini are looking to get back to the biggest stage and in the biggest moment, McMahon shines the brightest.