O’Toole and Ferguson get the bowl running 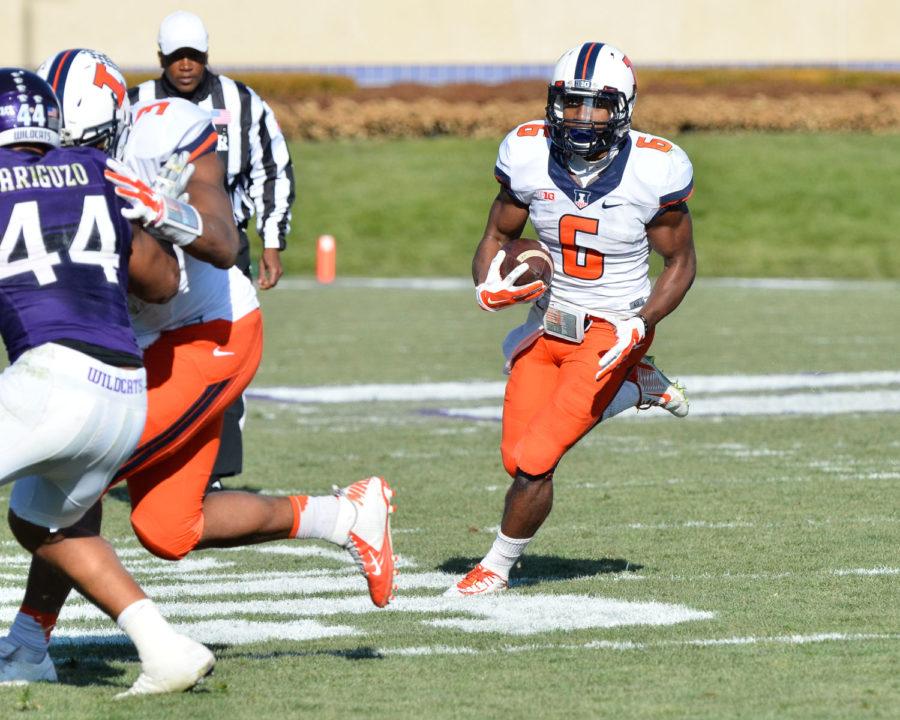 Illinois' Josh Ferguson carries the ball during the game against Northwestern at Ryan Field in Evanston, Ill. on Saturday. Ferguson and quarterback Reilly O'Toole combined for 242 yards on the ground in the Illini win.

EVANSTON, ILL. — A throng of fans greeted Reilly O’Toole after the season-ending victory. They waited in the stands. They waited by the stairs and by the pavement path leading to the visiting locker room.

Security held them back, but the sound of his name echoed as he went down the line of fans and gave high fives. The big grin that started on the sidelines as the clock ticked down never left his face. Even in the postgame interviews.

It was under the guidance of O’Toole and running back Josh Ferguson that the Illini sealed a 47-33 rivalry victory at Northwestern at Ryan Field. Illinois walked away with the Land of Lincoln Trophy and a bowl game berth.

Illinois had its best rushing game of the entire season with 291 yards.

“I think it was the best 60 minutes we’ve played all year,” O’Toole said. “And it’s a great time to do so at the end of the year.”

O’Toole went 17-for-28 passing with 147 yards, one interception and three touchdowns. But he added to that with a career-high 147 rushing yards on 21 carries.

Offensive coordinator Bill Cubit said O’Toole knew the team had faith in him and finally showed that he cut down on his mistakes.

“He would do good things, but he would always make the big mistake,” Cubit said. “Well, he’s not making big mistakes anymore.”

For freshman Mike Dudek, the feeling of winning hadn’t set in right after the game. He credits O’Toole with leading the team. Dudek finished with a team-high 63 receiving yards and one touchdown on seven catches.

“It was awesome; you could just see the fight he had,” Dudek said. “He’s been a backup his whole career and these past two weeks, he’s just come out and given it everything he’s got. He really put the team on his back today and led us to a victory.”

Josh Ferguson was another huge player in the run game. Ferguson sat out the first quarter last week against Penn State and carried the ball only five times for just nine rushing yards.

Ferguson said O’Toole and his rushing yards allowed the team’s running game to really do well.

“It’s tough to guard,” he said. “It makes the running game a lot smoother for the running backs when you have a quarterback who can run.”

Ferguson said the team was finally able to turn a claim into a fact.

“This is our state, our team. Whenever we play Northwestern, we should be able to beat them. Today was just a product of all our hard work,” Ferguson said.

But for the two, their contribution was clearly about the team and taking a rivalry victory. It was about the chance to keep playing and to prove wrong those who didn’t believe a bowl game was possible just weeks ago.

“This group of guys, nothing much had to be said,” O’Toole said. “We’ve worked so hard; to give up – that would be disgraceful.”