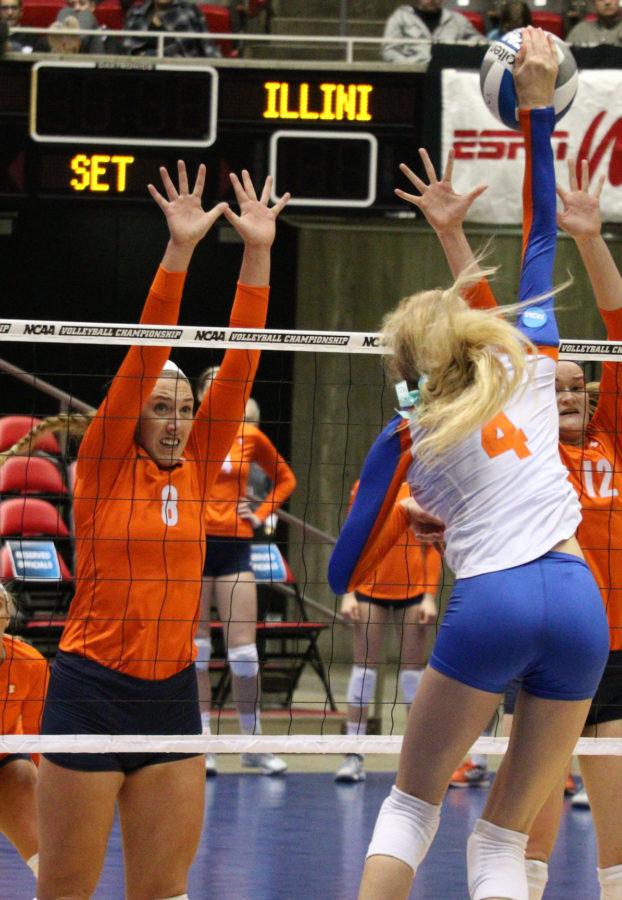 Illinois' Alexis Viliunas (8) attempts to block a hit from Florida's Carli Snyder (4) during the Sweet 16 against Florida at Hilton Coliseum on Friday.

As junior setter Alexis Viliunas lay at midcourt beneath the net, the Illini faithful in attendance at the Hilton Coliseum let out a collective gasp.

The fans, fellow Illini players and coaches knew what was at stake as Viliunas winced in pain. Illinois’ season hung in the balance.

While Viliunas returned later in the set and led the Illini with 46 assists, her highest total in the tournament, her effort wouldn’t be enough. The No. 9 Illini dropped their NCAA Tournament Sweet 16 match to No. 8 Florida in five sets.

With Illinois up 6-3 in the second set, Viliunas went up to block and came down on a Florida outside hitter, rolling her ankle. Illinois won the point but lost the “quarterback” of its team in the process.

After grabbing at her knee as she lay on the court, Viliunas left the court on her feet with the help of head coach Kevin Hambly and the Illinois trainer. To junior outside hitter Jocelynn Birks, the fact that Viliunas walked off the court was a big relief.

“I thought it was her knee at first so I was obviously worried about her,” Birks said. “Then she got up and walked I was like ‘okay.’”

Hambly quickly tried to shuffle his lineup and insert sophomore setter McKenna Kelsay into Viliunas’ spot, but was forced to call a timeout.

Without Viliunas the Illini looked out of place. Florida took advantage with a 4-2 run to bring the score of the second set to 10-8. The Gators had already taken the first set

After realizing the injury wasn’t as serious as was initially thought, Viliunas’ mind jumped to returning to the court.

After having her ankles re-taped, that’s exactly what Viliunas did.

The Illini fans began to cheer. as Viliunas jogged back onto the court and took a seat between the Illinois coaches. She flashed thumbs up to Hambly and subbed back into the match.

The difference was noticeable. Viliunas garnered an assist on a Birks kill and tallied a kill of her own later in the set. After coming back into the match, Viliunas assisted on eight of Illinois’ final 15 points to help the Illini take the second set 25-21.

“It did help Lex,” Hambly said. “She relaxed. She was a little bit tense.

“I thought she came back and played better than she did before the injury.”

Illinois capitalized on its momentum, taking the third set by a score of 25-22, as Viliunas continued to play well. Viliunas added 10 more assists in the third set including a tricky set to Birks while sliding on her knees.

Although Hambly didn’t think Viliunas’ early-match injury had any direct bearing on the outcome of the match he said the team had to deal with “a lot of adversity,” and that it handled it well throughout the match.

“The team did a great job of continuing to fight,” Hambly said.