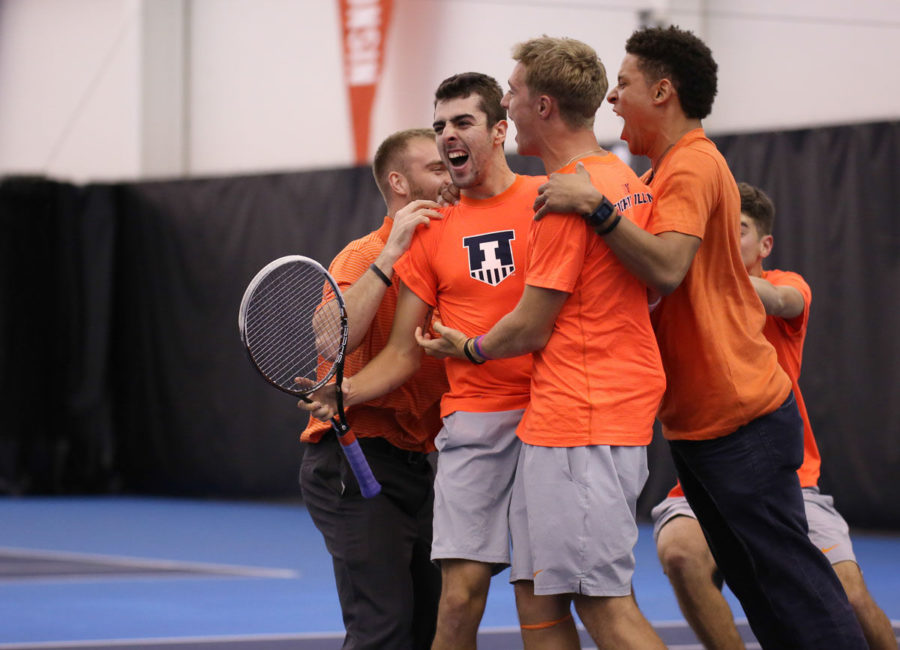 Illinois’ Farris Gosea celebrates a comeback win during the match against No. 6 North Carolina at Atkins Tennis Center on Saturday. The Illini won 4-3.

The Illinois men’s tennis team has played three top-15 opponents this year. In every one of those matches, it has trailed 3-1.

Against the Baylor Bears last week, the Illini fought back to win. Friday night against Duke, an evening full of missed opportunities for the Illini resulted in a heartbreaking loss. By Saturday, there weren’t any more missed opportunities against No. 6 North Carolina at Atkins Tennis Center. Instead, the legend of Farris Gosea was born.

That’s what head coach Brad Dancer called it. Gosea clinched the match for the Illini over the Tar Heels in a thrilling three-set comeback win. He was down 2-5 in the third set, and things looked bleak. But Gosea kept battling and forced North Carolina’s No. 2-ranked Brayden Schnur into a tiebreaker. When Gosea realized that No. 31 Jared Hiltzik had won his match on Court 1 to close in on the Tar Heels, he knew he couldn’t give up the match.

“I really didn’t want to throw it away right there,” Gosea said. “It was so loud in here, I couldn’t really hear myself think. I just told myself, ‘Play every point with purpose.’”

After coming all the way back from a 5-2 deficit to a 5-5 tie, Gosea dropped the next set. He held off elimination once more to tie things up to 6-6, initiating a tiebreaker with Schnur. Gosea found himself in a 3-1 hold to open the tiebreaker. But Gosea kept fighting. Up 6-5 for match point, he broke Schnur’s serve and was swarmed by orange-clad teammates and fans as “Oskee-Wow-Wow” blared over the Atkins Center speakers.

The “Net Nuts” didn’t want to leave the court Saturday. Fans congratulated Gosea and stuck around to sing the “Alma Mater.” Dancer told the crowd that it made the difference in the game.

“You’re feeling the students back here, you’re feeling the energy of the crowd. A lot of our guys were down, just looking for any kind of spark,” Dancer said. “Upstairs, downstairs, everywhere across the court, tremendous energy tonight. (It) really pulled our guys through.”

There was a lot to cheer about in the resilient comeback effort for Illinois. Every match was a battle. After losing the doubles point, Illinois lost the first set in four of the six singles matches. The only Illini to win in straight sets, No. 40 Tim Kopinski, still had to go through a 7-5 tiebreaker in his first set before scoring the Illini’s first victory, 7-6 (7-5), 6-2.

“We get down in doubles, get down in singles,” Dancer said. “It seems like it never stops us.”

In his first big-time dual match, Toshiki Matsuya dominated his first set 6-2, but faltered in the second and let UNC’s Stuart DePaolo stay alive. But Matsuya finished him off in the final set 6-2 to give the Illini their second point of the day.

Like Friday against Duke, Hiltzik fought back from an early first-set deficit to turn the tide of the match. Down 5-2, he pushed things past six sets, eventually falling 5-7. After that, Hiltzik put Brett Clark of UNC away 6-4, 6-4, with match point coming in the middle of Gosea’s duel with Schnur.

“A great job of staying tough, hanging in there,” Dancer said. “The thing in tennis is if you hang in there long enough, you finally get a chance to have a winning moment. Farris obviously capitalized on that winning moment. And the legend of Farris Gosea is born.”

Chris can be reached at [email protected] and on Twitter