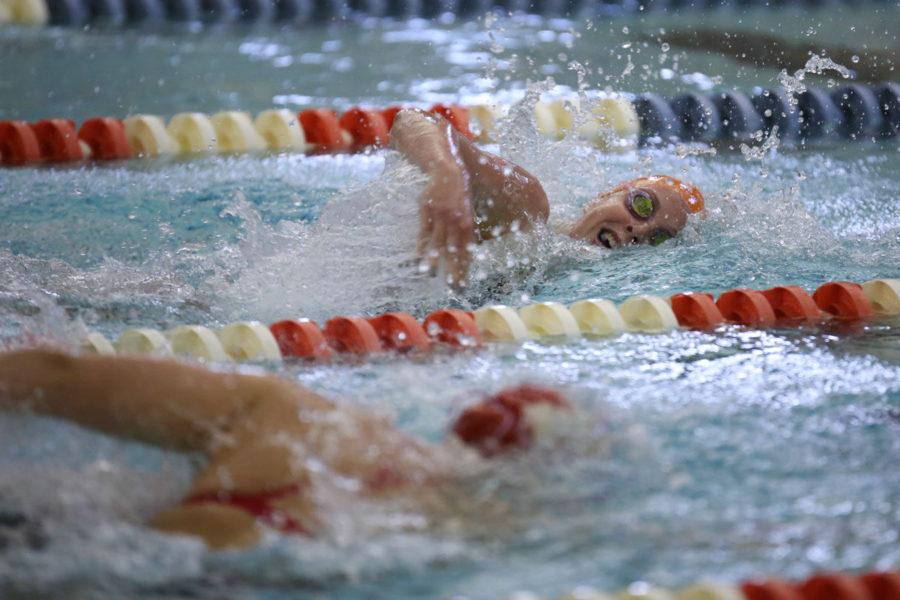 Illinois’ Amelia Shilling swims the 200 yard freestyle event during the meet against Nebraska at the ARC on Jan. 24. The Illini finished the regular season on a high note and are looking forward to competing in the Big Ten Championships in February.

Eight seniors on the swimming and diving team ended their dual meet careers on a high note Saturday when Illinois defeated the Michigan State 190-110 at the ARC.

Prior to the meet, the seniors stood amongst themselves before the crowd and received a standing ovation. They were also given time with family and friends who came out to support them.

The Illini broke an ARC pool record in their first event — the 400 medley relay — with a time of 3 minutes, 48.39 seconds. They kept the momentum for the next four events, until Michigan State pulled out a win in the 200 butterfly.

But the Spartans’ success was short-lived. Besides sweeping both diving events, they only notched one swimming event win ­— the 200 breaststroke.

The win was a collective effort for the Illini, as no swimmer won more than two events. Senior Alison Meng, sophomore Amelia Schilling and freshman Gabrielle Bethke all won two events each.

“Just like last week, everyone contributed,” Meng said. “It didn’t matter who you were or for what place you were competing.”

Head coach Sue Novitsky said the team has been showing signs of reaching its peak.

“I saw a lot of great things today in terms of their race strategy,” Novitsky said. “The long distance swimmers chose a good time to drop off and switch gears. The sprinters did a good job at where they chose to take their breaths and attack their turns.”

Even with more competition remaining, seniors such as Meng are starting to realize that the end of their swimming careers is near.

“Having this be my last dual meet and home meet together, it definitely feels like a huge chunk of my swimming career is over,” Meng said.