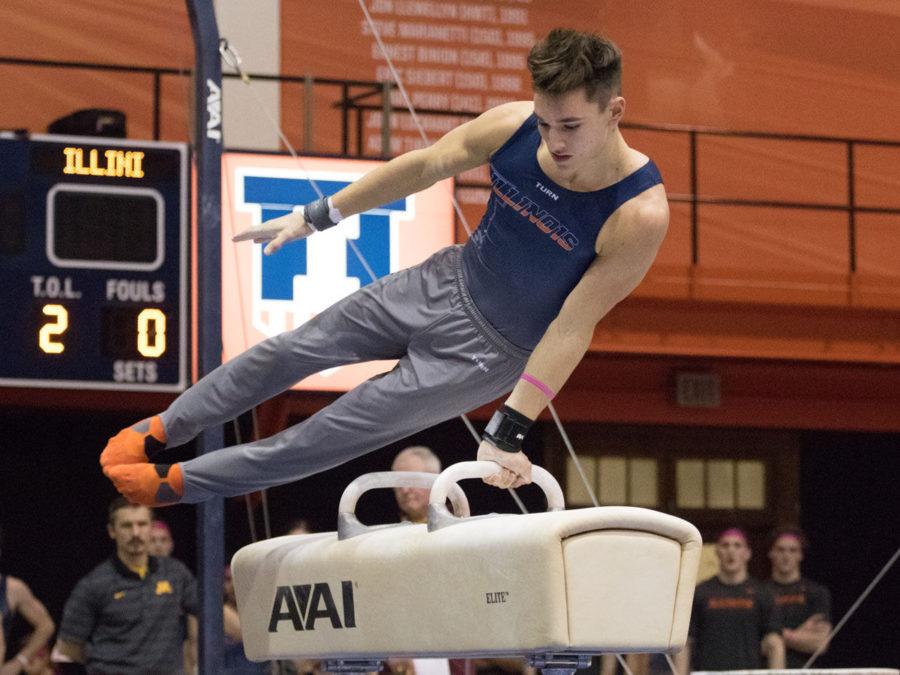 Illinois’ Matt Foster performs on the pommel horse during the gymnastics match vs. Minnesota at Huff Hall on Saturday. The pommel horse event was a turning point for the Illini as they went on to win.

The Illinois men’s gymnastics team showed complete control in its 435.2-419.7 win over Minnesota.

The meet consisted of a head-to-head format with teams alternating turns while competing in the same event. While head coach Justin Spring encourages the use of this format in order to make the sport more understandable to the average fan, he still wants the format to be perfected.

“Until we hit our five-count format in March, it’s just going to be too long with six athletes on each event with each team,” Spring said. “It creates a little bit better following and understanding, but you can’t have a product go this long. We have to fix the timing.”

The meet lasted just under three hours, which is approximately one hour longer than the average meet. While the meet did take longer than what the team is accustomed to, the Illini remained focused enough to dominate throughout the entire meet.

In the first event, the floor exercise, Illinois set a season-high score with 72.55. Sophomore Matt Foster recorded a career high in the event with a total of 14.7.

“I finally had my max difficulty that I’ve been trying to go after for a couple years,” Foster said. “I knew I had to step up against a pretty good opponent today and the routine hit exactly how I wanted it to.”

In the second event, the pommel horse, the Illini recorded the fourth-best score in team history with a 72.3. Illinois finished the event with six of the top seven scores.

It was during the pommel horse event that Foster said the team sensed that they can take control of the meet and put the pressure on the Gophers.

“With the (head-to-head) format, you can definitely tell that there was pressure in the air,” Foster said. “Once we got to pommel horse, one of our better events, I can tell from the start of our order that it was time to pull ahead and close out the meet early.”

The biggest battle of the night was not between Illinois and Minnesota, but between Illini teammates junior C.J. Maestas and freshman Bobby Baker, who were both competing for the all-around title.

Although Maestas had the higher two scores, Baker had the more consistent meet and edged his teammate for the all-around title by two-tenths of a point.

When asked if his victory in the all-around over Maestas will spark a competitive rivalry between the two, Baker replied, “I hope so.”