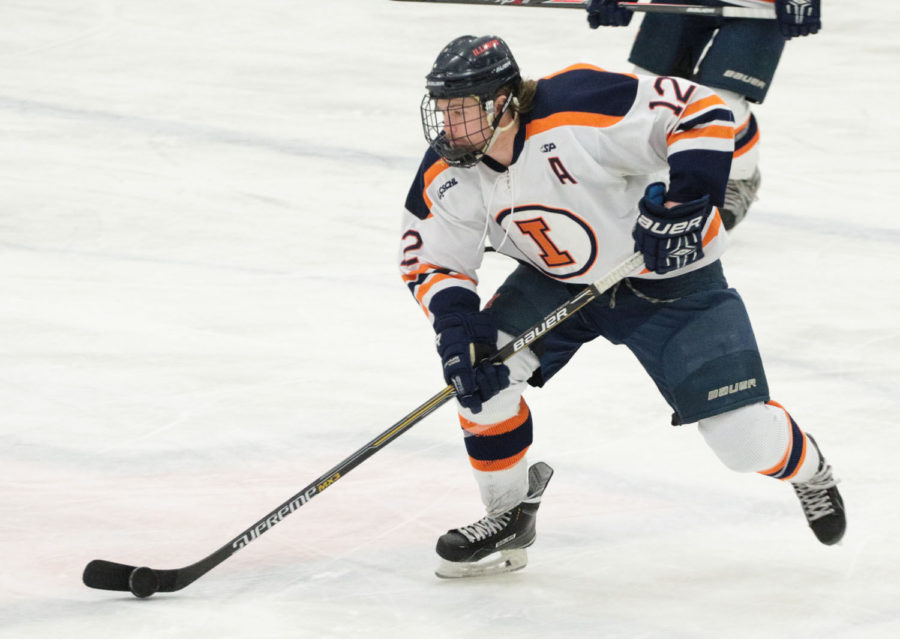 Illinois’ Jonathan Langan (12) moves the puck down the rink during the hockey game v. Eastern Michigan at the Ice Arena on Friday. Illinois won 10-1.

The Illinois hockey had just started its weekend off with a 10-1 victory over Eastern Michigan en route to a series sweep the following night. The Illini’s nine-goal margin of victory on Friday was the team’s largest of the season.

“I wouldn’t say we were exactly tested,” Dusek said. “They brought what they had, and we were just a little too much for them tonight.”

Dusek scored two of Illinois’ 10 goals and said the game helped him end a cold streak conveniently right before the start of the national tournament Thursday. The Illini spread the scoring around with seven different players netting a goal.

Head coach Nick Fabbrini said the Eagles were made up of mostly younger players who were not accustomed to playing on such a large rink. His team took advantage of that with three quick goals in the first period and managed to maintain the intensity the rest of the way.

“After going up 2-0 on them, we were able to go for the jugular, so to speak,” Fabbrini said. “Last week, we were in a similar position and let Ohio back in the game. When you have a team on the ropes, you have to finish them off.”

But after Friday’s game, Fabbrini predicted the series finale would be a tougher challenge and his intuition was not mistaken.

Not wanting to be embarrassed again, Eastern Michigan played a more physical game in Saturday’s series finale. Despite scoring the first goal of the game, Illinois let up two unanswered goals in the first period and found itself down 2-1 heading into intermission.

In the locker room, Fabbrini reminded his team that it can’t take periods off if it wants to do well at nationals. The message registered with the team, which didn’t allow Eastern Michigan to score for the rest of the contest. In the second period, center John Olen and forward Chris Lozinak put in the game-tying and game-winning goals, respectively, to lead the team to a 3-2 victory over the Eagles.

Following the victory, the seniors relished their final game at the Illinois Ice Arena before setting their minds to the national tournament Thursday night. Forward John Langan said the team accomplished what it set out to do against Eastern Michigan — to prepare for the weekend ahead.

“We got a lot of guys who aren’t normally in the lineup out there playing, which is really important for nationals,” Langan said. “If somebody gets hurt, then we have plenty of other guys ready to go.”

Fabbrini was glad his team had the opportunity to play one more close game this season before it makes a run at a championship next weekend. He expects every game at the national tournament to be hard-fought and his team got another taste of that Saturday night before the real challenge starts Thursday against John Carroll University.

“Even games that we have lost, we have had more than enough opportunities to get on the scoreboard and get ourselves back in the game,” Fabbrini said. “This weekend was a nice tune-up, not only getting some guys on the score sheet and getting them going offensively, but also test us in another tight game.”