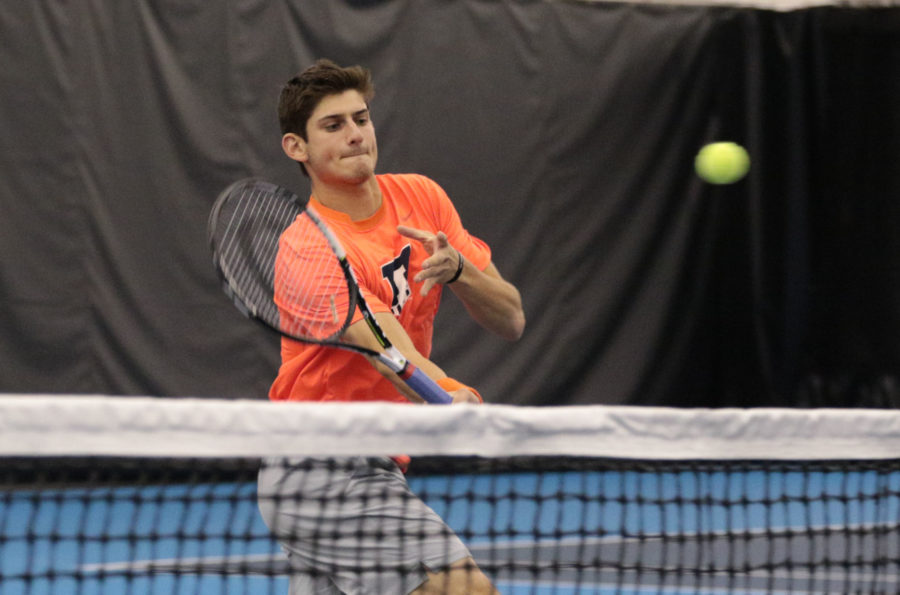 The Illinois men’s tennis team is currently ranked No. 3 in the nation. It’s the team’s highest ranking since 2006, and it’s in large part due to the contributions of the team’s freshman class.

Aleks Vukic, Aron Hiltzik and Toshiki Matsuya have all made an impact for Illinois, consistently earning a place in the lineup and helping the Illini to a 13-2 record. Head coach Brad Dancer said that they’ve had the opportunity to succeed from the start of the year.

“I say the same thing to the guys every August,” Dancer said. “Everybody’s got a clean slate, step up and play and the guys that perform the best are going to get the most opportunities.”

The impact of the freshmen class is even more impressive considering that the team brought back every member of its roster from 2013. No one graduated from a team that had made a run to the Sweet 16 in the NCAA tournament, yet the team has a completely different look this year.

A lot of the freshmen’s success is due to their tennis experience prior to college. While the jump to NCAA competition can be a tough transition in any sport, Dancer said that the Illini freshmen were well-prepared. For them, it’s just more of the same.

“For some of them, it’s not necessarily a jump. They’re playing competition that they’ve played against their whole lives.” Dancer said. “They’ve got professional experience before they come in. They’re playing against guys that play at the collegiate level… If it is a big jump, it’s hard to be successful.”

No one was more prepared in this regard than Hiltzik, who spent his senior year of high school at the Junior Tennis Champions Center in Maryland. Coming from a background of elite junior tournaments, the biggest difference for Hiltzik is playing as part of a team.

“It’s a team sport. It’s a lot more energetic, just a lot more fast-paced,” Hiltzik said. “We’re playing in front of a lot of fans… There’s a lot less room for error, there’s the no-ad scoring which has definitely been a bit different for me.”

Vukic didn’t have the same elite background that Hiltzik had in high school, and six months playing tennis in Spain before arriving in Champaign helped prepare him for play.

The fall season of NCAA tennis is all individual tournaments rather than team competition — Vukic credits the experience he gained in those fall tournaments as critical to his success in the spring.

Vukic advanced to the quarterfinals of his first collegiate tournament, rattled off seven-consecutive victories at All-American pre-qualifying and qualifying and went 4-0 in his last competition of the season.

Hiltzik also had a breakthrough fall, reaching the semifinals of the ITA Midwest Regional Championships. Matsuya didn’t have a breakout fall, but has been one of the most consistent members of the Illini lineup in the spring. He has a 6-1 record in dual matches this spring.

“In juniors, sometimes you get really easy matches and you can take a mental holiday almost, but every match here is pretty tough and you have to be ready,” Matsuya said. ”I’m just focusing on the things I need to do in the match and that has really helped me to play better.”

These freshmen know they aren’t just one-hit wonders; they’re a foundation for the future.

“I just want to win for the team and just do my best for the team to try to progress my game for the next season as well. Everyone wants to get better the next couple seasons, so the team can get better,” Vukic said. “It’s not just about now.”