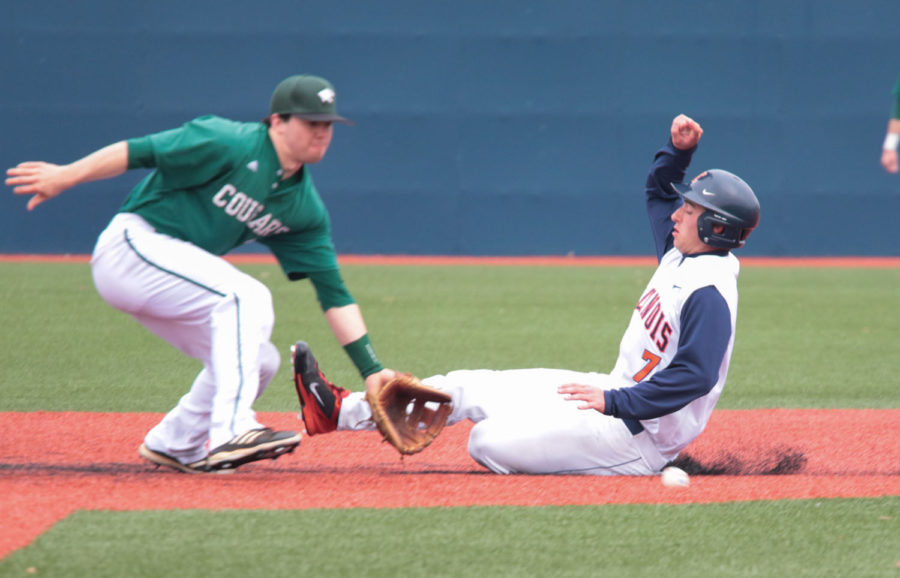 Last season, the Illinois baseball team went 4-2 in midweek games, something the players were not proud of and warned against heading into Tuesday’s home opener against Chicago State.

That lull was non-existent for Illinois, who put on an offensive clinic at Illinois Field against Chicago State. The Illini recorded 14 hits and scored runs in five innings, including four straight, to beat the Cougars 7-3.

“Coming off a couple big wins against Oklahoma State, it’s definitely one of those games where your energy level isn’t going to be as high,” second baseman Reid Roper said. “I think scoring first was an important thing and got us back into the mojo of having to win this game.”

Illinois (12-3-1) wasted no time getting on the scoreboard. Shortstop Adam Walton led the game off with a single, but was thrown out at second when he tried to extend the hit into a double. Casey Fletcher walked and advanced to third after a failed pick-off attempt by Chicago State pitcher Zach Thomas. He was driven in on single from second baseman Reid Roper.

The Illini got back to scoring in the bottom of the third. After being hit by a pitch, it seemed as if the Cougar defense caught Fletcher between bases. However, the umpire called a balk on Thomas, advancing Fletcher to second. After a Roper walk and a Nagle fly out, designated hitter Pat McInerney ripped a two-out double deep into left-center to score both base runners and give Illinois the 3-0 lead.

Walton added another run in the bottom of the fourth when he hit a double deep into left-center that bounced off the wall and scored Will Krug from second base.

In the fifth, McInerney continued his hot, offensive day with a double into deep left-center that barely stayed in the park, scoring Roper from second. First baseman David Kieran added onto Illinois’ lead with a single down the first base line that drove in McIrnery from second and gave the Illini a 6-0 lead.

Starter Rob McDonnell pitched a strong six innings for the Illini, striking out four and only giving up five hits. With a strong offensive effort, the senior pitcher made quick work of the Cougars, only facing trouble in the fourth and fifth innings.

Despite the strong start from McDonnell, the bullpen had some trouble securing the win. Freshman relief pitcher Doug Hayes entered the game in the seventh and gave up a two-run double to Chicago State’s Julian Russell. But the right fielder Fletcher threw out two Cougars at the plate in the inning, preventing any more runs from scoring.

Nick Blackburn came in the eighth inning and allowed three hits and a run on a Jordan Stroschein single. Blackburn avoided more trouble by picking off the Cougar’s right fielder at first base to end the inning.

“When you give up three hits in three innings, that’s not very good,”  Hartleb said. “We need to be sharper out of the bullpen. … They need to do a better job in these types of situations in order to earn playing time.”

Illinois will have the day off Wednesday and will practice Thursday in preparation for hosting Southern Illinois this weekend. After a nice midweek win, Illinois is focused on taking care of business against its in-state rival.

“I was thinking about treating that as a state championship,” Roper said. “You don’t want your in-state school to beat you, so we need to get fired up about it and take it as a challenge.”