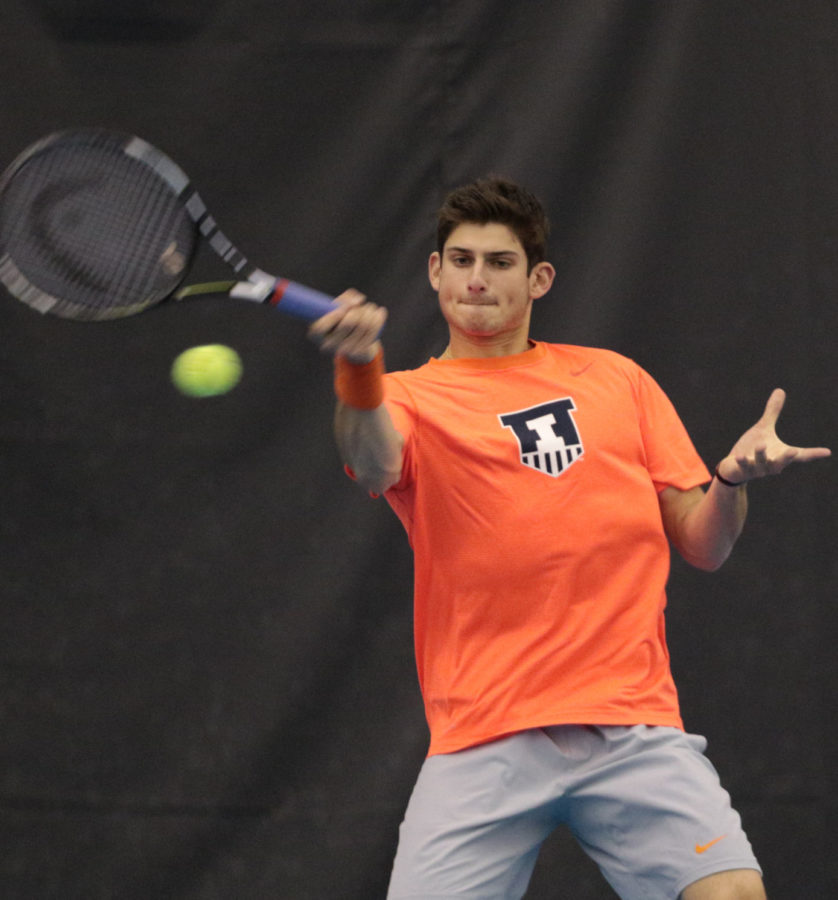 This weekend is unprecedented for the Illinois men’s tennis team.

Head coach Brad Dancer called it a “throwback trip,” in the vein of old-time professional barnstorming. The Illini will travel roughly 300 miles around Texas to play three top 20-teams: No. 8 Texas on Saturday, No. 9 Texas A&M on Sunday and No. 17 TCU on Monday.

The Ilini have already dealt with three ranked teams in three days this season at ITA Indoor Nationals. The team hosted the tournament in Chicago and went 2-1, defeating then-No. 13 California and then-No. 8 Ohio State before losing to then-No. 4 Georgia. Playing three top teams on the road will be a different atmosphere, said senior No. 18 Jared Hiltzik.

“It’s going to be a tough environment,” Hiltzik said. “Obviously we’re not going to have as big of a fan support so a lot of it is going to come from the guys that are not playing in the lineup as well as just people that we know in Texas.”

The Illini had last weekend off, their first all spring without a match. Hiltzik says that the team’s training over its week off will ensure that fatigue won’t be a problem.

“We put a huge emphasis during our week off on our fitness, and we refreshed our bodies fitness-wise,” Hiltzik said. “We put ourselves in really good physical shape. Fatigue should not be an issue for us.”

Last season, the Illini beat both Texas and A&M at Atkins Tennis Center — part of a run of four matches in four days. But Texas A&M would get revenge on the Illini with a 4-2 win at last year’s ITA Indoor Nationals.

Texas will be a tough opponent for Illinois. The Illini are 2-9 all-time against the Longhorns, who haven’t lost a home match in almost two years. They’re 11-1 and have won four consecutive matches, all against ranked teams.

At the No. 1 singles spot, the Longhorns have one of the top players in the country — senior No. 4 Soren Hess-Olsen. They open their outdoor season Thursday against Michigan State, another Big Ten opponent.

Texas A&M has a 6-1 home record this year. Like Illinois, they’ve fallen to No. 3 Georgia and defeated then-No. 5 Ohio State and Kentucky. However, the Aggies’ most impressive win this season was a home upset over No. 1 Oklahoma, 4-3.

Doubles look to be a strength for the Aggies and the doubles point has been key to upsets of the No. 1 and No. 5 teams in the country. They have two top-30 pairs in No. 9 Harrison Adams and Shane Vinsant and No. 26 Jeremy Efferding and Jordan Szabo.

The Aggies will be looking for another top-five win this weekend and could jump on an Illini team that has struggled with doubles play all season. No. 12 Ross Guignon and Tim Kopinski will have their work cut out for them in one of their toughest matches of the season.

After defeating Texas A&M on the road at the start of the spring, the Horned Frogs have lost their last five matches against top-20 teams, including No. 2 Baylor.

TCU’s top doubles team, No. 29 Nick Chappell and Will Stein, already beat Guignon and Kopinski in the fall at the ITA All-American Championships. Kopinski defeated Chappell in singles at the same tournament. Hiltzik defeated Stein a few weeks later at the ITA National Indoor Collegiate Championships.

While three matches against top-20 opponents in three days will be quite the test for the Illini, the team is getting ready the same way.

“We’re approaching it like any other match,” Hiltzik said. “I think we’ve been very prepared.”