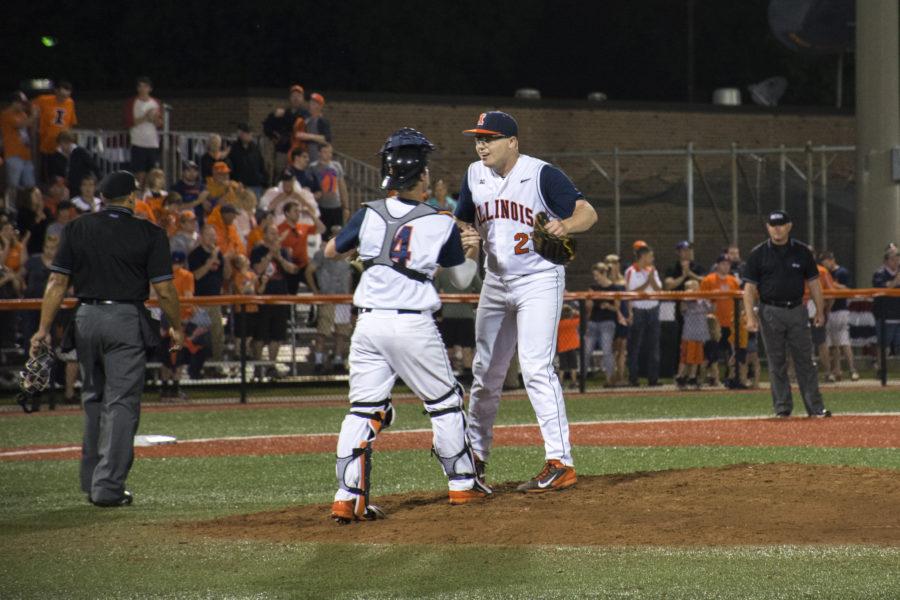 Illini pitcher Kevin Duchene and catcher Kelly Norris-Jones celebrate together on the mound after defeating Ohio at Illinois Field on May 29.

Despite only throwing one strikeout and not being as dominant as usual, junior pitcher Kevin Duchene pitched a complete game to pick up his 11th win on the year, cementing Illinois’ first ever win as a host to a NCAA Regional.

“It was the team’s mentality to start this regional off on the right foot,” Duchene said of Illinois’ 10-3 victory.

At first, it looked as if the Bobcats would pose a threat, plating a run in each of the first two innings. But then Duchene, despite not being overpowering, settled in.

Following an 11-minute rain delay, Duchene started off the third by recording his first scoreless inning on the night. He went on to allow only one more run, which was surrendered in the fifth inning.

“That’s what makes him special,” head coach Dan Hartleb said of Duchene’s battling performance. He can win regardless of how good the stuff he throws is.”

The Illini were held scoreless in the fourth, sixth and eighth inning. Every batter in the lineup reached based. Catcher Jason Goldstein and designated hitter Pat McInerney went hitless but earned a walk apiece.

Ohio’s offensive stat sheet was much different. Only one of the team’s hitters, Mitch Longo, had a multi-hit game. Long went 2-4 with an RBI and was solid in left field for the Bobcats.

On the mound, the situation wasn’t much better for Ohio. The team went through five pitchers on the day, as miscues and an inability to put hitters away led to many changes. Starting pitcher Jake Miller only pitched two innings before Ohio made their first call to the bullpen. Following Miller was Tom Colletti, whose three innings of work were the most by any Ohio pitcher on the night. Corey Wells and Spencer Sapp also pitched for a combined one inning of work.

Capping off the night for Illinois was senior Will Krug, who hit a triple in the seventh inning to give his team its tenth run of the game.

“Being the first time (a regional) has ever been hosted here, it’s a special night,” Hartleb said.

Illinois will next face Notre Dame on Saturday at Illinois Field.