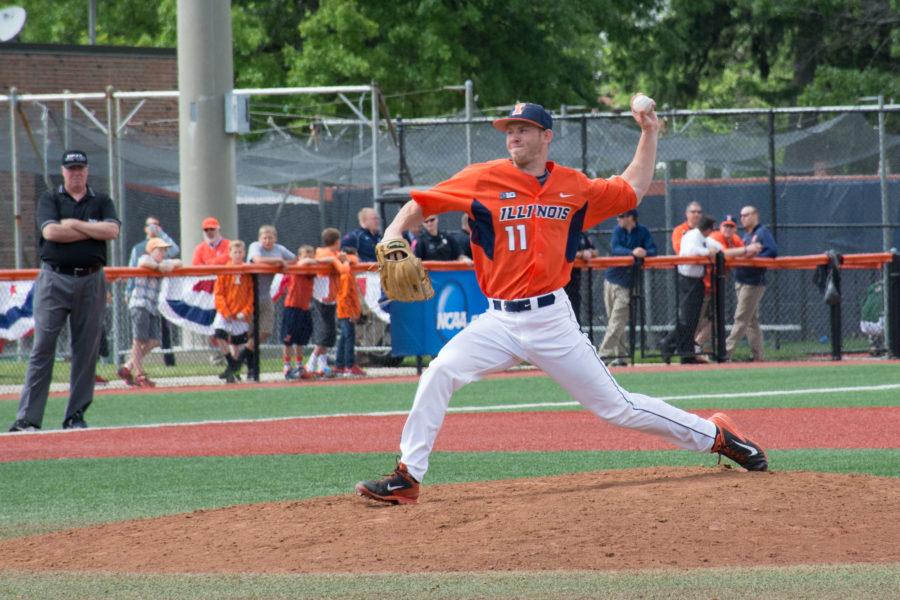 Illini pitcher Tyler Jay during a shutout inning in Illinois’ victory over Wright State at Illinois Field on June 1.

Tyler Jay’s only appearance at the NCAA Championship Champaign Regional for
the Illinois baseball team couldn’t have been a more vital one.

The southpaw entered the championship game in the
sixth inning and dominated in his four innings of work against Wright State. He
allowed one hit, one walk and struck out five en route to his school-record  14th save
of the season – the Illini won the game by a score of 8-4 in front of a packed
house at Illinois Field. Starting pitcher John Kravetz earned the victory.

“We knew he was going to pitch in some capacity,” head
coach Dan Hartleb said of his closer. “Tyler’s a (player) that is going to be a
major part of our weekend next weekend. So, to make sure that he got time on
the mound, and quality time (to) get his pitch total up, I thought this was
important.”

Even though it’s been some time since Jay last pitched
– the last time being May 23 against Michigan at the Big Ten tournament
– one thing was for sure: he showed no signs of rust.

“If I don’t throw (for two-straight games), I’ve learned
that I can throw more innings on that third day,” Jay said. “If I don’t throw
the first two games, I’m expected to have those long innings. It’s something I’ve
kind of known throughout the whole year and I’ve really adjusted to.”

Center fielder Will Krug was a major contributor for
Illinois as well, but on the offensive end. He provided the team’s first run of the game with an RBI
double in the fifth. The Illini tacked on three more runs that inning to take a
4-2 lead.

Wright State tied the game up in the bottom half of
the inning – Illinois competed as the away team – but Krug led the charge once
again in the sixth.

With two outs and catcher Jason Goldstein on second,
the Raiders intentionally walked first baseman David Kerian to get to Krug.
Krug followed up with his second RBI double of the game, scoring Goldstein. Kerian,
who would eventually be named the MVP of the regional, was called out at the
plate after colliding with Wright State catcher Sean Murphy.

The collision riled up Wright State head coach Greg Lovelady,
who was ejected from the game after a dispute with home plate umpire John
Bennett about the play at the plate.

Raiders’ shortstop Mitch Roman was also ejected from
the game the following inning after making a comment to Bennett. Center fielder Mark Fowler huddled up with his teammates after the ejection in an attempt
to gather their focus.

Hartleb had a few choice words for his team, too.

“We had a short meeting because you have to keep your
composure,” Hartleb said. “You also have to expect other things to escalate
later in the game because of emotions. (They) can’t do anything stupid where (they’re)
going to miss games in the future.”

It was after this moment of hostility and lead changes that Jay came in and set a completely different tone. His dominant performance silenced
the Raiders’ bats and any chance they had of taking the lead again.

This is the first time that the Illini have won a regional
championship. They will host a NCAA Super Regional against
Vanderbilt, the defending College World Series champions this weekend.

“It’s kind of surreal,” Krug said of being part of the
first Illini time to ever win a regional championship. “Maybe it’ll hit us
soon, but right now, it’s just awesome. Having everyone come out to the game
all weekend… and packing the stadium for our games was awesome. This whole
season’s been a blast. Can’t put it any better than that.”

Check out a gallery of the game here.