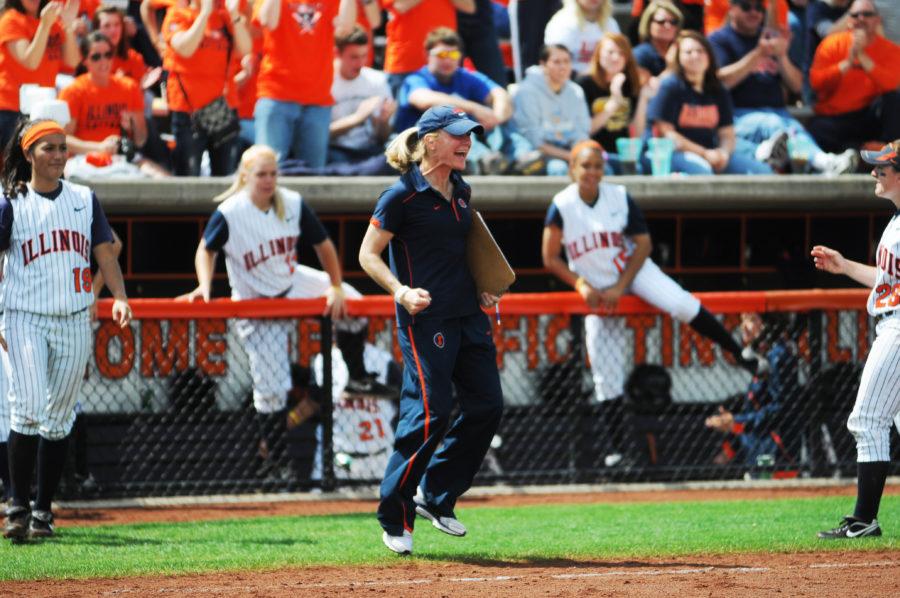 Coach Terri Sullivan celebrates after winning the game against Western at Eichelberger Field on Saturday, May 7, 2011.

Terri Sullivan, the inaugural head coach for the Illinois softball program, has stepped down after 16 years at the helm.

The announcement came Thursday morning with a release from the university’s athletic department, as well as a letter from Sullivan.

The morning announcement came as a surprise to her players.

“We ended up getting an email from coach herself, explaining that she was retiring and the reasons why,”  second baseman Allie Bauch said.

Sullivan stated that she wanted to be closer to her husband and daughter in Iowa. Her husband, Shawn Wax, used to be an associate athletic director at Illinois before leaving in 2010 to work for the University of Iowa.

Sullivan, the daughter of a former basketball coach, started the Illini softball program after a successful stint as an assistant coach for the UIC Flames. She was 29 years old when she started the program.

The furthest Sullivan took a Fighting Illini team was to an NCAA Regional final in 2004.

Another notable accomplishment was when she was named Big Ten Coach of the Year in 2010. Her team posted a 45-8 record in the Big Ten and had a season-long winning streak of 14. The team finished the season No.25 in the country.

One of Sullivan’s attributes that will be missed from the program is her energetic demeanor.

“No matter what she’s doing, she always has that enthusiasm,” Bauch said. “That’s what’s awesome about her.”

That may be what Sullivan is most remembered for. Whether it was on or off the field, she was the brightest person around.

Sullivan noted that her connection with Illinois will never vanish.

“To everyone here, you can’t get rid of me,” she said. “You know when you need an interview to fill a time slot, you only have to ask one question.”

Associate head coach Donna Dibaise will take over the team on an interim basis during the program’s search for a permanent head coach.

Sullivan’s impact over time will not be the teams she’s coached or the awards she’s won.

“People are what it’s all about, and anything that a coach has from a success standpoint is directly correlated to the effort of others,” Sullivan said. “Players mean the world to me. With that said, it is an emotional day. If it wasn’t, I shouldn’t have been doing this for that long.”