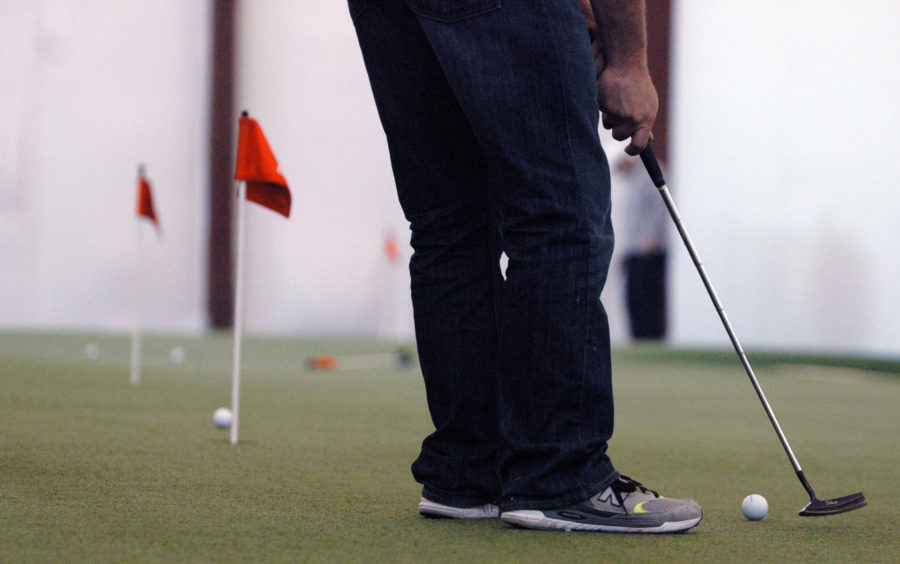 One of the members of the Illini Men’s Golf team putts on the practice green on February 23, 2011.

One current and two former Illini took part in the U.S. Open last week. Sophomore Nick Hardy was the current Illini, and D.A. Points and recent grad Brian Campbell were the former students who competed in the golf championship.

The two amateurs (Hardy and Campbell) were the big surprises. Both golfers made it through to the final rounds.

Hardy earned a spot in his first U.S. Open after carding 66-68 at the Springfield Country Club sectional qualifier. At one point, he was tied for eighth on the leader board, ahead of some professionals. Hardy very nearly had an ace (hole-in-one) as well. The video of that swing floated around social media for some time.

This was a good bounce-back for Hardy after having a rough go against USC’s Eric Sugimoto in the final four. Hardy was one of the golfers who lost in his matchup, which led to the Illini ending their hopes for a national title.

Hardy did, however, have a few bogeys early on, which allowed some other golfers to qualify for the later rounds.

Hardy did end strong, though, scoring five birdies in the final round to end at 10 over par.

Campbell also impressed as an amateur. In his second appearance at the U.S. Open, he was able to hold a tie with Dustin Johnson, who would later fluctuate in the top five, early on. Campbell finished with just 67 strokes after the first round. His impressive showing on a tough green was able to give him the edge early on.

“I really don’t know,” Campbell said after the first round about his play on the green. “I kind of all week have been pretty comfortable with them (the green).”

Campbell has been bouncing around the idea of going pro soon. He said the Walker Cup would be where he would make a decision on whether or not to go pro.

Campbell ended the tour strong as well, scoring an eagle on the 12th hole of the fourth round.

What ended up being difficult for these amateurs was the length and the strain of the course. Both golfers saw a slight increase in strokes each day.

D.A. Points was also at University Place. Points, now 38 years old, did as well as his Illini counterparts. Points was unable to stay even, as he had several bogeys through the rounds. He ended at 12 over par after four rounds.