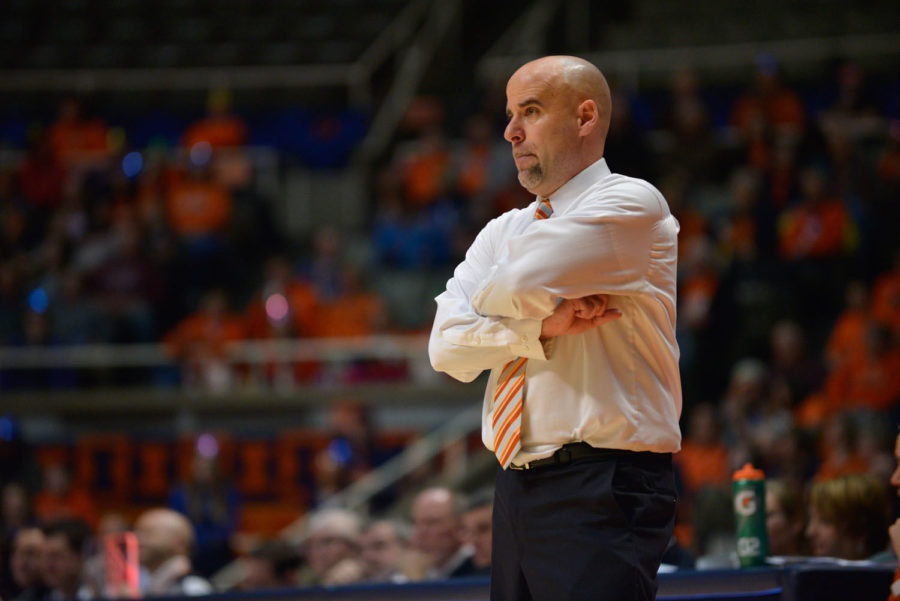 Women’s basketball head coach Matt Bollant looks on as the Illini play a game against Nebraska at Jan. 12, 2014.

Former Illinois basketball players took the next step in their allegations against head women’s basketball coach Matt Bollant, filing a suit in U.S. District Court in Urbana on Wednesday morning.

There are seven plaintiffs in the case: Amarah Coleman, Alexis Smith, Taylor Tuck, Nia Oden, Sarah Livingston, Taylor Gleason and Jacqui Grant. According to the suit, the plaintiffs are seeking $10 million in compensatory and actual damages from the defendants across four counts.

Chancellor Phyllis Wise released a statement regarding the lawsuit.

“Athletic Director Mike Thomas has already added staff to closely monitor team activities and has implemented additional ways for student-athletes to report any concerns they have,” Wise said in a press release. “We will continue to explore ways for students to connect with a university staff member to address them promptly and constructively. ”

The plaintiffs claim their rights were violated “through a racially hostile environment and retaliation maintained within the University’s intercollegiate Women’s NCAA Division I Basketball Program” from when Bollant and Divilbiss were hired, until the plaintiffs graduated, resigned their scholarships and/or transferred “due to the defendants’ acts of discrimination and retaliation.”

The lawsuit is the second filed against the Division of Intercollegiate Athletics in less than a month. On June 8, former soccer player Casey Conine filed a suit alleging mistreatment of a series of head injuries she suffered while playing at Illinois.

The plaintiffs, who are all represented by Terry Ekl, a University alumnus and criminal defense lawyer based out of Lisle, Illinois, allege several injustices against them while they were a part of the program and after.

The list includes harsher discipline by the coaching staff toward black players, segregated practices and rooms on road trips, and several examples of verbal and emotional abuse directed at both black and white players.

Allegations of mistreatment on the part of Bollant and Divilbiss were first reported by The Daily Illini in May. The allegations came through letters addressed to Chancellor Phyllis Wise and Thomas in April from the Grant, Tuck and Gleason families.