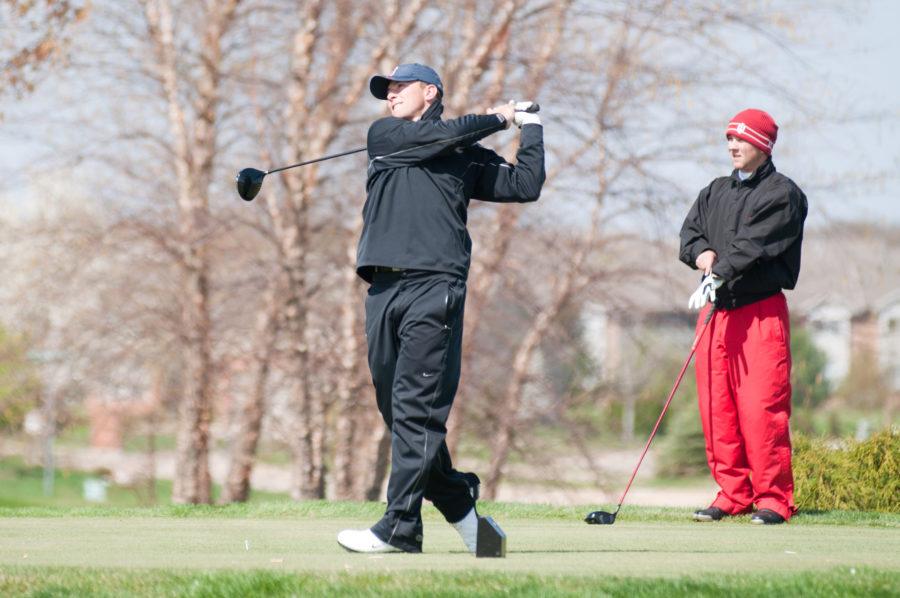 Illinois’ Luke Guthrie tees off at hole 11, during the second day of the Illini Spring Classic, held at Stone Creek Golf Club in Urbana on Sunday Apr 17, 2011.

D.A. Points had one of the most notable activities before actual the competition happened. At the Pro-Am in Silvis a day before, Points played a few holes with Bill Murray. Points has golfed with the comedian and Wilmette, Illinois, native before at AT&T’s Pebble Beach Pro-Am.

“When he hits the ball, it’s solid,” Points said of Murray’s golf swing. “Hits it flush, and it sounds as good as me hitting one or Tiger Woods hitting one.”

Murray cited a gift he received from a fan as the reason for attending the Pro-Am.

“Almost thirty years ago, a fella sent me an autographed baseball of the Cubs,” Murray said. “It said ‘sometime you gotta come and play in the Quad City Open.’”

Points limelight was short-lived as he was cut after the second round. Points had a strong showing, going three under par in the first round until three bogies in the second ended up burying him in the end.

Luke Gurthie, who, as an Illini, ranks second all-time for average strokes in a season with 71.19, had the best showing of the group.

The 2012 grad started out strong, making the first hole of the second round a birdie, and was eyeing a victory for the early part of the tournament. He went 14 under par after four rounds thanks to his strong first round where he went seven under par.

Scott Langley, a former NCAA champion, was behind Guthrie from the group of Illini, going nine under par. Langley started off floating around par, but had a strong showing in the final round. Langley finished at five under par thanks to six birdies.

Steve Stricker, who set the lowest 72-hole score record in Illinois history with 273, was the third and final Illini to make it through all four rounds, going nine under par and tying Scott Langley. Stricker has won the John Deere Championships three times – 2009, 2010, and 2011.

Recent Illinois graduate Brian Campbell was cut after the second round, going two over par for the JDC. A rough double bogey did not help Campbell, as he struggled to find a rhythm throughout the first two rounds. Campbell is just coming off an excellent performance at the US Open, being the top amateur at the tournament.