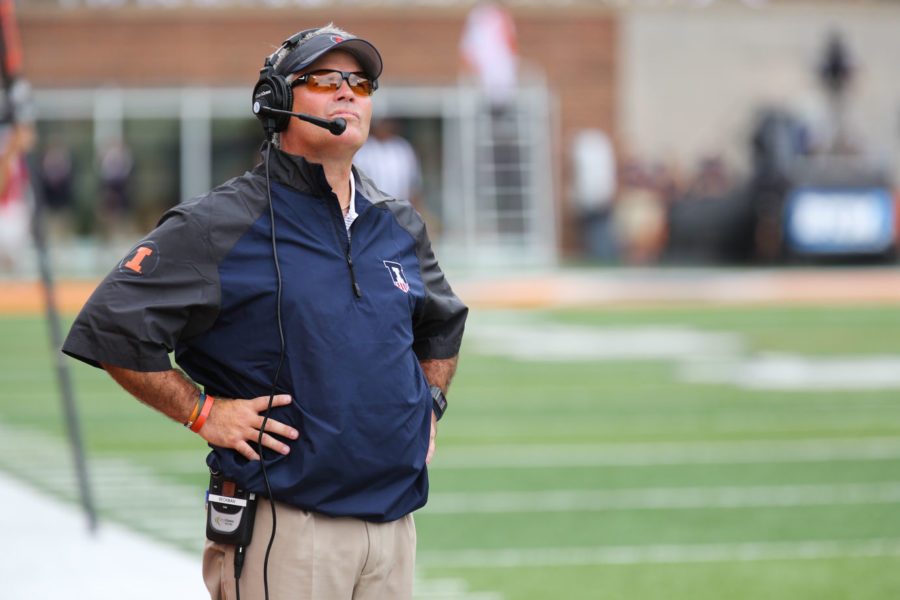 Illinois head coach Tim Beckman watches a replay after a referee's call during the game against Youngstown State at Memorial Stadium on Saturday, Aug. 30, 2014. The Illini won 28-17.

CHICAGO — Illinois football is back as head coaches, selected players and media congregated in Chicago for the annual Big Ten Media Days, the unofficial start of the college football season.

Head coach Tim Beckman, running back Josh Ferguson, offensive lineman Ted Karras and linebacker Mason Monheim made the trip north for the Illini and Day One presented a chance for the Illini to talk to the media for the first time since the end of spring practice.

But instead of responding to questions about X’s and O’s, the four Illini spent the day answering questions about allegations of player mistreatment and mishandling of injuries while Beckman has been the team’s head.

This was Beckman’s first media appearance since the controversy broke in May and the investigation is still ongoing. Throughout the day, Beckman dodged questions about the allegations and instead highlighted the leadership of his 23 seniors and the team’s opening game, against Kent State on Sept. 4.

“I’m only concerned about one thing, and that’s August 5th to September 4th,” Beckman said. “I’m focusing now on creating an atmosphere that our players are successful in. That’s all I’m worried about right now.”

Illinois is once again gunning for a bowl appearance after the 2014 season (6-7, 3-5 Big Ten) ended with a loss to Louisiana Tech in the Heart of Dallas Bowl. The bowl berth was Beckman’s first as the head coach of the Illini, temporarily steadying the coach’s often rocky footing in the eyes of Illinois fans.

With Wes Lunt locked in as the starting quarterback this year, there were no questions about who the signal caller would be — the position was the main topic of discussion at last years Media Day — but some asked Beckman about Lunt’s. Lunt played in eight games last year, but spent time on the bench due to a leg injury.

“He’s an exceptional talent and we must keep him healthy,” Beckman said.

While the offense will be working on capitalizing on a healthy Lunt, the defensive emphasis is on maintaining the strength it had at the end of the season. Illinois will utilize Tim Banks and Mike Phair as co-defensive coordinators after Banks held the role by himself for the last three seasons.

With a new format at this year’s Big Ten Media Days to help accommodate the size of the conference, seven teams talked with media on Thursday and the other seven will talk  Friday.

The Buckeyes were without National Championship-winning quarterback Cardale Jones, Big Ten Offensive Player of the Year J.T Barrett and star running back Ezekiel Elliot, who were not in attendance. But it was the question of who would start at quarterback that drove Meyer’s session at the podium.

“You’re talking about two to three very invested people and incredible families,” Meyer said. “When you talk about the history of Ohio State football, every one of their names has a prominent role in that history book. And that’s real.”

Illinois hosts Ohio State on Nov. 14, but as Illinois coaches and players have said, the focus is Camp Rantoul, the first game against Kent State on Sept. 4 and finding an identity.

“When you don’t have success, it’s hard to have an identity,” Karras said. “We have the deepest team we’ve had, look like a Big Ten team now. In past years, we haven’t had as much depth at the line position and we’ve had guys go down and we had to scramble and plug some guys in early. Now we don’t have to.”

That identity will be shaped by senior leaders such as Karras, an honorable mention All-Big Ten in 2014, and Monheim, who enters the 2015 season with 294 tackles, second-most among active FBS player.

“I remember just the other day, I was a freshman and now this summer, I’ve got guys coming in and they’re calling me “sir,” and it’s a little different,” Monheim said. “But I definitely embrace it. Not only myself, but the two guys here.”