Illini football’s backup running back will be key contributor 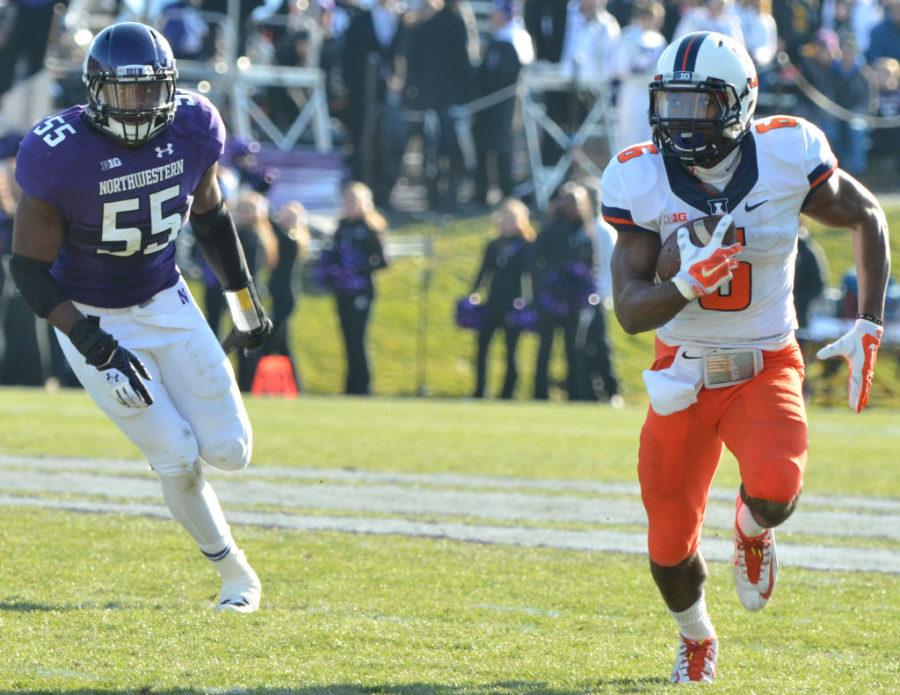 Illinois' Josh Ferguson (6) runs the ball during the game against Northwestern at Ryan Field in Evanston, Ill. on Saturday, Nov. 29, 2014. The Illini won 47-33. Several players are vying to be Ferguson's backup.

The arrival of August means college football is only a month away. Schools around the nation open camp on campus or at a remote location and prepare for another season.

Up in Rantoul, Illinois, the Illini are working out the kinks and, as always during camp, position battles are emerging.

Illinois head coach Tim Beckman and his staff evaluate each position battle and often the starters are determined in the heat of camp week.

There’s no battle for the Illini’s starting running back position with Josh Ferguson returning for his senior season, but the Illini running backs are still one of the most scrutinized groups up in Rantoul.

Although the top position is taken, the back-up to Ferguson — a pass-first back who isn’t a between-the-tackles bruiser — is expected to have a sizable role.

“The spring was very fruitful (for the other players),” Ferguson said. “They got a lot smarter, stronger and wiser.”

Dre Brown impressed coaches during the spring when he enrolled at the University early to take advantage of the practice time. The freshman tore his ACL during one of the last practices before the spring game and is out for the season.

Freshman Ke’Shawn Vaughn has impressed during the first few weeks of Camp Rantoul. The four-star recruit was a surprise signing for Beckman and his staff on signing day and has already shown that he can keep up with his teammates. Vaughn was dinged up a bit during practice last week, but Beckman and the University have not announced any change in his health and it appears Vaughn won’t miss any time.

Other players — junior college transfer Henry Enyenihi, who impressed in the Spring Game, and freshman Reggie Corbin — have also had strong camps, but Beckman will not reveal the winner of the spot until the start of the season.

The back-up position is important because of the different opportunities Ferguson will have with the offense. Injuries to key wide receivers Mike Dudek and Justin Hardee will force offensive coordinator Bill Cubit to move Ferguson all over the field. The staff knows he has the talent to contribute at different positions to help boost the offense.

“I think we have to,” Beckman said, of using Ferguson at different positions on offense. “We have to utilize Josh because he’s one of our guys, our playmakers … he’s one of those guys you have to work on those plays he’s capable of making.”

Ferguson’s use elsewhere will force the back up to contribute. The senior running back has shown fatigue in past seasons when he’s had a high amount of carries early in games.

Although winning the No. 2 spot might not be any player’s dream, the winner will have a benefit: a large amount of carries and an essential role in the offense.

“If we want to be a better offense, we have to do those kinds of things,” Beckman said of involving other running backs in the offensive scheme. “We’re going to have to be able to spread the football around to take a little pressure off of Josh and become a better offense.”