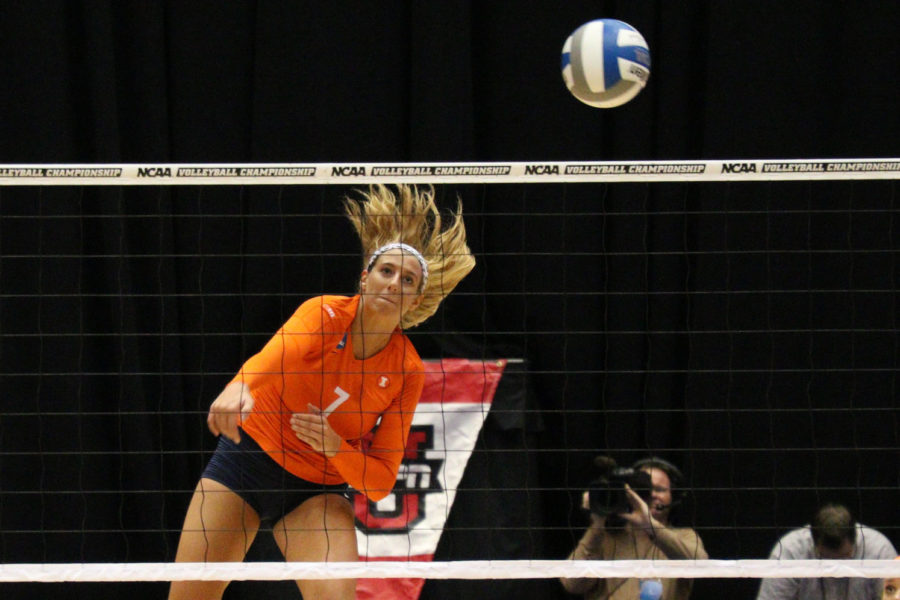 Illinois' Joceynn Birks (7) goes for an attack during the Sweet 16 match against Florida at Hilton Coliseum on Friday.

The Illinois volleyball team is determined to kick off the 2015 season with a higher tempo and tighter defense.

Illinois finished third in the Big Ten last season with a 26-8 record and trip to the Sweet 16 before they were eliminated by Florida. This year, head coach Kevin Hambly’s team looks to once again compete for a national title — this time with a younger and more athletic squad.

Illinois will feature three freshmen, all of whom were included in the top 50 of Volleyball Magazine’s Fab 50 list. While Hambly has said it is too early to judge their progress, he has not ruled out including any of them in the starting lineup.

The Illini will once again aim for their annual goal of having the best defensive team in the Big Ten, but Hambly expects this year to be particularly exceptional.

“Our players are big and can play physically at the net,” Hambly said. “We don’t have a lot of holes physically, and not that we had many last year, but I feel like we have gotten some pluses this year: a little bit stronger, faster and taller.”

Sophomore defensive specialist Brandi Donnelly will be an integral part of the defensive goal. She led the team with 575 digs last season, the second most digs in a single season in Illinois history . She said it has been a challenge to adjust to Hambly’s new higher tempo system, but she and the rest of the team have bought into making it work.

“Defense is always the goal,” Donnelly said. “We are going to try to be really scrappy after every ball and make sure everybody is in the right spots.”

A returning standout for the Illini is senior outside hitter Jocelynn Birks, a unanimous preseason All-Big Ten selection. She was the team’s offensive anchor last season, leading the team in kills, points and aces.

She took her talents overseas during the summer to play with the Big Ten Foreign Tour team. She played in Croatia, Slovenia and Italy against both club and national teams. She said she enjoyed the experience, but is excited to turn her focus to helping the young Illini squad improve in all aspects of its game.

“Working with new players is always going to be something that is going to be different,” Birks said. “We are trying to develop a high level of communication with all of them.”

Following the Orange & Blue Scrimmage on Aug. 22, Illinois will officially start the season on Aug. 28 against Louisville in the Illini Classic. Hambly and his team are looking forward to putting their new team to the test and showing off why they will be a contender this season.

“I have been really impressed with the way they have prepared themselves for this season, and just the general level of talent,” Hambly said. “We have a lot of competitors, and those newcomers will be part of that competition for sure.”