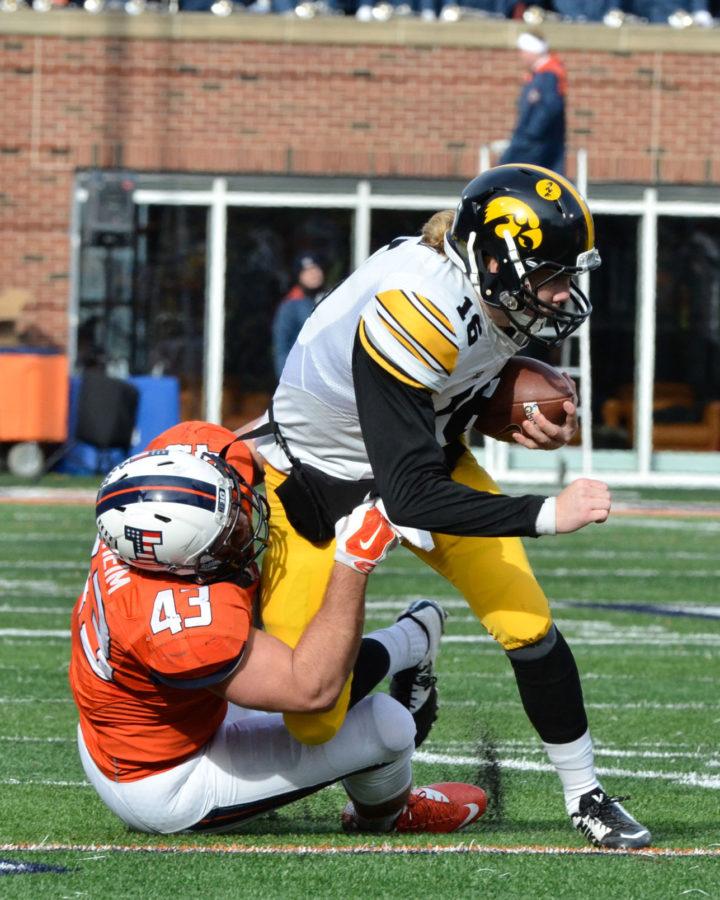 A few weeks ago, Illinois linebacker Mason Monheim showed up with a unique look to the Big Ten Media Days in Chicago.

With his long hair pulled back in a bun, cowboy boots and a suit complete with a bolo tie, the accessories looked more appropriate for a rodeo rather than a hotel ballroom in the big city.

Monheim, who is from a small town in Ohio, often carries a country flair, especially in his attire.

And while it was the clothes that may have stood out first, it’s the numbers he’s been recording since he led Illinois and all Big Ten freshman in tackles as a true freshman in 2012 that have made his name synonymous with the Illini defense.

“He’s been ‘the guy’ since his freshman year, so he’s got a lot of weight as far as a leader,” said offensive lineman Ted Karras. “He makes the calls … I mean being the guy since you were 18-years-old, it’s a lot of pressure, but you’re the voice … guys listen to him.”

Three years later, Monheim enters the 2015 season with 294 tackles, the second-most among active FBS players. In the 2014 season, he led the Big Ten in forced fumbles with four, and this year, Monheim was picked for the 2015 Rotary Lombardi award and Butkus award preseason watch lists.

But the watch lists aren’t really on his mind.

“It’s cool people are seeing some of my work pay off,” Monheim said. “But then again, it’s an individual award at first and second it’s just a watch list. So it doesn’t hold a lot of weight.”

Leading the Illini defense out of the Big Ten basement. Illinois had the worst total defense in the Big Ten in 2014: It allowed 5,933 yards in total offense from opponents and 51 touchdowns.

A key change marks Monheim’s senior season — Mike Phair was added to the staff as co-defensive coordinator with Tim Banks and will also serve as the defensive line coach.

“He’s energetic,” Monheim said. “He’s very passionate about what he is coaching and his style. He’s confident in his style.”

Since the allegations of player mistreatment and mishandling of injuries under Beckman broke in May, Monheim has played defense off the field, voicing support on Twitter and in person for Beckman, the man who gave him an opportunity and has seen Monheim grow through the years.

“It’s more than a game to him and that’s what I respect about him,” Monheim said. “He sees the whole thing; he sees the change from a boy to a man.”

It was at Big Ten Media Day where Monheim fielded question after question about the ongoing investigation involving accusations by former teammate Simon Cvijanovic, who only a year earlier sat in Monheim’s seat.

Monheim has spent three years building bonds at Illinois and he’s hoping those close relationships come across on Sept. 4, when the Illini face Kent State in their season opener.