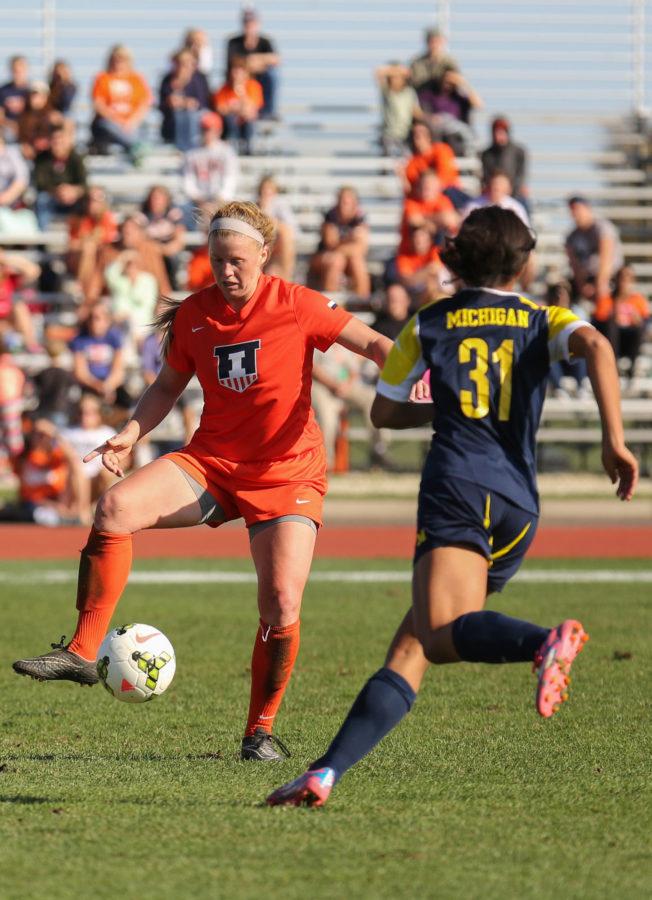 Illinois’ Janelle Flaws (3) looks to bring the ball under control during the game against Michigan at Illinois Track and Soccer stadium on Sunday, Oct. 26, 2014. The Illini lost 2-1.

Scoring goals was not a problem for the Illinois soccer team in its first game of the season against Oakland.

The Illini won, 4-1, in their home opener Friday against the Golden Grizzlies.

Despite the abundant offensive production, forward Jannelle Flaws believes defense was the key to victory.

“Defensively, we did really well as a team,” Flaws said. “I think that was the biggest difference. Our team defending on the flank and getting people to the backline.”

Illinois held the Golden Grizzlies to five shots. Only three of the five were on goal.

“To score four goals, that’s always a great way to start a season,” head coach Janet Rayfield said. “There were some moments of great soccer. I would prefer a shutout, but us coaches are never happy this early in the season, right?”

Her team produced a shutout in Sunday’s 1-0 win over Illinois State. Goaltender Claire Wheatley recorded four saves and sophomore Sarah Warren cleared one shot off the line to preserve the shutout.

Flaws and Reagan Robishaw led the offense in Illinois’ first two games, with two goals total each. Flaws assisted on both of Robishaw’s goals and Robishaw assisted on one of Flaws’ goals.

The two seniors have demonstrated strong chemistry on the field and Rayfield will utilize that this season.

Flaws believed Robishaw made a major impact for Illinois, establishing a lead in the first half of Friday’s match.

“Her dynamic movement off the ball and her ability to take people one-on-one and get to that endline was what we really needed and she had a lot of energy,” Flaws said about Robishaw. “That definitely sparked us in the first half.”

Flaws continues to climb the ladder on the Illinois soccer career goals list.

Her two goals in Friday’s 4-1 win against Oakland were career goals 44 and 45.

Goal No. 44 was a header off a corner kick from defender Hope D’Addario. Flaws believes headers have been a big part of her prolific goal scoring.

“I’m not as tall as some people, so I really have to rely on finding the right places to make as big of an impact in the air as I can, but I think that’s one of my bread and butter skills,” Flaws said.

Her next opportunity to break the record is Friday, when Illinois hosts TCU.