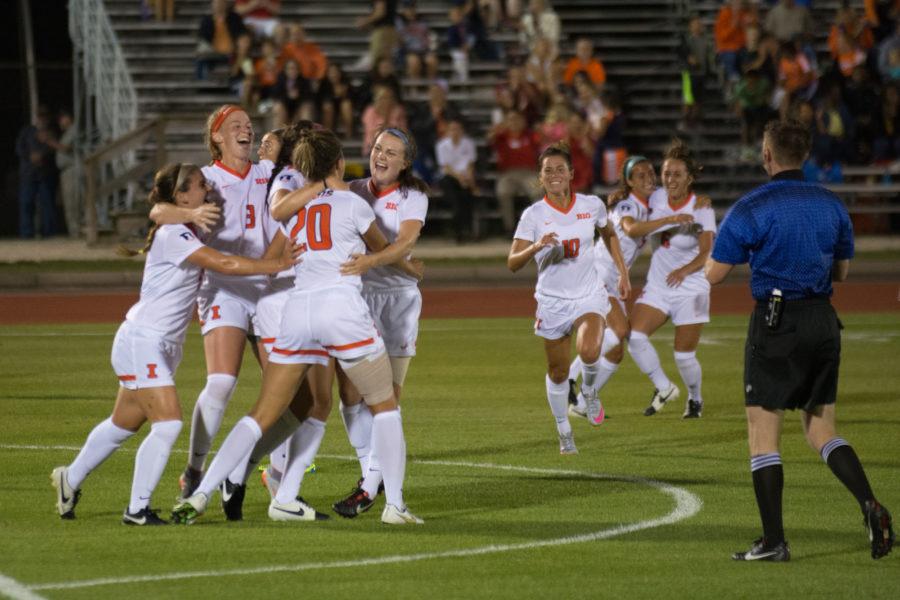 Illinois players celebrate after a goal during Friday’s win over TCU.

It might have
been the first time in program history Illinois soccer (3-0-0) faced TCU (0-3-0), but
for head coach Janet Rayfield and goaltender Claire Wheatley, the match was
somewhat of a reunion. For those on the Illini who didn’t have ties with the Horned Frogs, the match was still one filled with much grit.

The scoreline makes it seem like Illinois — who won 5-2 — dominated the match, which was the case for the majority of the second half, but the first half, and entire game for that matter, was filled with much physical play.

Rayfield believed most of the
physicality stemmed from TCU’s head coach Eric Bell, who was Rayfield’s
assistant at Illinois from 2002-2005.

“I know coach
Bell really well and both of us really value teams that are gritty and want to
compete and want to fight hard,” she said.

Rayfield had
talks with Bell before and after the game. She said a lot of the
conversations consisted of catching up on life’s moments since the two worked
together.

Defeating a
former colleague added a little something extra for Rayfield.

“You always want
to beat people you respect,” she said.
Wheatley, who is a Texas native, also has a connection with the Horned Frogs. She played with
three members of TCU’s team in a Texas all-star league during her high school
years.

As for the victory, it was somewhat of a bittersweet experience for Wheatley.

“It felt really good,
let’s be honest,” she said. “It’s also good to see the people
you know, but it could be hard when (you see) they’re really upset.”

Despite not
having any personal connections with TCU, Friday’s match was still filled with emotion for Illini forward Jannelle Flaws. Emotional performances, though, are basically business as usual for one of the program’s best in history. Flaws scored two goals career goals 46 and 47 in the victory which ties her with Tara Hurless for first place on Illinois’ all-time goals scored list.

While breaking
the record has been one of the main story lines this year, Flaws remains focused
on her team’s overall performance.

She demonstrated
her desire to win in the scrappy game against the Horned Frogs. Flaws and a few
players from TCU had minor altercations and a few instances resulted in
collisions. But, that’s all part of the game for Flaws.

“I hate losing more than
I love to win,” Flaws said. “It shows when I play. I’ll do whatever
it takes and sacrifice anything.”

Let’s just say that this was one of those reunions filled with lots of heated moments.