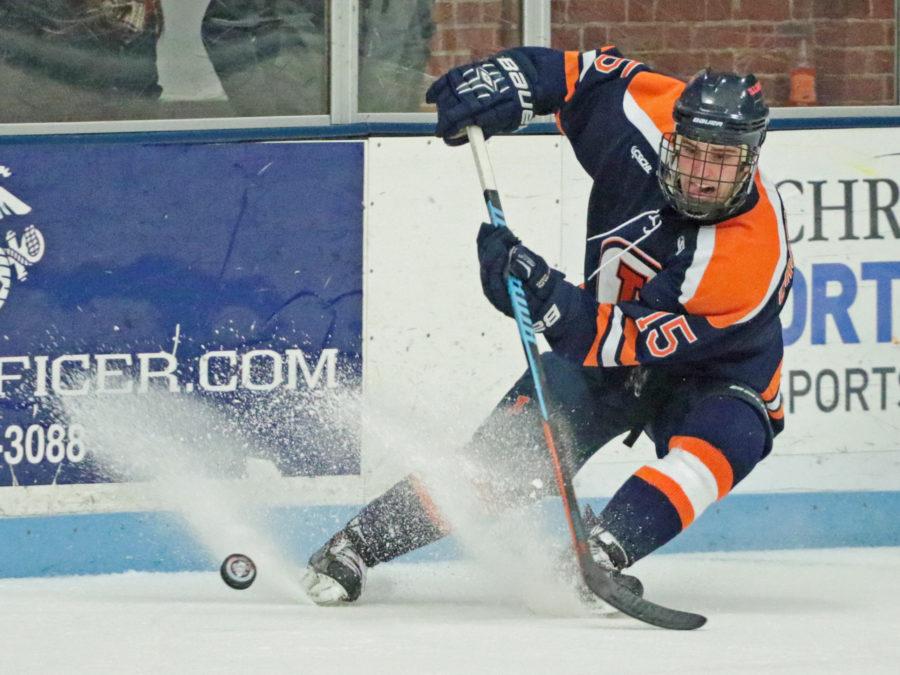 The Illinois hockey team can credit much of its success last season to the emergence of then-freshman Eric Cruickshank.

His 32 points were the second-highest on the team, and the team voted him Rookie of the Year for the 2014-2015 season.

Cruickshank is now heading into his sophomore season with the same mentality.

“I plan to keep contributing to the team as much as I possibly can,” Cruickshank said. “Whether that be scoring goals, blocking shots, or killing penalties.”

A forward that spent time at center and left wing last year, Cruickshank netted 15 goals and 20 assists through the regular season and playoffs.

Head coach Nick Fabbrini knows how good Cruickshank is, and says he always expects the best from him.

“My expectations haven’t changed necessarily,” Fabbrini said. “What we need from him may have changed. Since he got here he has been one of our most talented players on offense, and we are going to need him to build on how he played last year in order to perform at our best.”

Cruickshank was also voted one of the team captains this season, and he has begun to take on a leadership role for the team. According to Fabbrini, his leadership on and off of the ice will be just as important as his play this season.

Now that he is established as a strong player, other teams know that he is that the Illini have to offer, but Cruickshank doesn’t see that as added pressure.

“I am going to go into this season with a similar approach,” Cruickshank said. “You have to stick with what works.”

Five pairs of skates to fill

The Illini lost defensemen Joshua Baker, Robert Kokoszka, and William Nunez, along with forwards Jonathan Langan and Jacob Matisyak all to graduation.

The Illini brought in six new players to fill the gaps that the graduated players left behind. Freshman Tyler Opilka is posed to make an immediate impact. Nunez and Baker left big holes in the defense — Nunez was voted the team’s best defensive player, but Fabbrini thinks Opilka shows great promise.

Opilka, a St. Louis native, played in the USPHL junior league, which is the best junior league on the east coast.

Three other freshmen will join the Illini on the ice this year — Ben Jeon, Valentino Wilson and Liam Dadie. Jeon and Wilson both played in the state of Illinois in the Midget AA league before making their way to Illinois, and Dadie played at a prep school in Massachussetts.

The other two incoming players for the Illini are David Heflin and Connor Robbs. Heflin is a transfer from Division III school University Wisconsin-River Falls, while Robbs made the team at open tryouts. Fabbrini wasn’t even aware that Robbs was going to be there.

Fabbrini knows that the guys who graduated left a big hole in the program, but he is confident that the team will be fine.

“(The team) hopes that the new guys can step in and help fill that void.”

Flosi out for the season

The Illini will be without key forward Matthew Flosi this year.

Flosi is expected to miss the entire season after he had surgery to repair a torn labrum this offseason. He was a top line forward last season for the Illini: he recorded 14 points in 27 games. He also had seven goals and seven assists.

Though Flosi was a strong contributor to the team, Cruickshank believes that the team will be able to recover and still achieve their goals of being the best team in the CSCHL.

“We know that we are capable of reaching our goals,” he said. “If we get 20 guys in the lineup who all play their roles at 120 percent every game.”