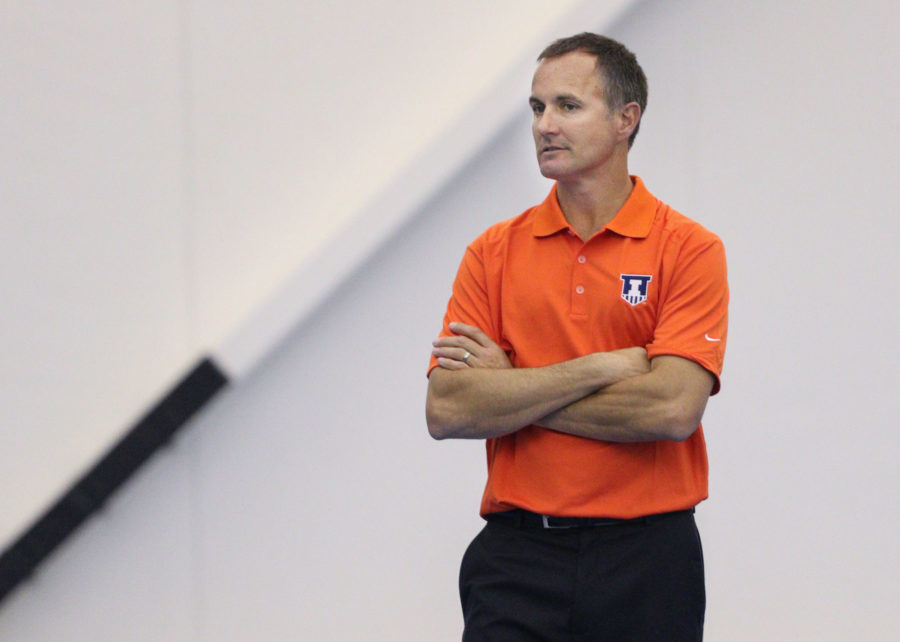 Illinois' Brad Dancer observes a match during the tennis game vs. Green Bay at Atkins Tennis Center on Friday, Jan. 23, 2015. The Illini won 4-0.

Becoming a Division I coach isn’t an easy thing to do without an impressive sports background.

For some coaches, such as Illinois men’s tennis coach Brad Dancer, words on a résumé do not fully represent all that he has been a part of in the tennis world.

Prior to professional coaching, Dancer pursued a tennis playing career. That pursuit wasn’t the bright spot of his career, he said.

“I had pretty good speed, but I had a very bad forehand,” Dancer said. “The only thing I could do was run around and try to think my way out of a tennis match.”

Despite his short-lived playing career, Dancer managed to garner an All-Big Ten selection and appear in an NCAA Championship doubles final in his senior year at Michigan State. Dancer played small money tournaments following his graduation from Michigan State, but never made an appearance on any professional tour.

Only a year removed from college, Dancer began his collegiate coaching career at his alma mater. There he served as an assistant coach from 1993-98 while exploring other coaching options. During that time, he got an opportunity to work with Billy Jean King, one of tennis’ all-time greats.

Dancer lived in Aspen, Colorado, at the time, and was already working with Martina Navratilova, another all-time great, who was close with King. Navratilova put Dancer in contact with King and Dancer assisted her when she was the head coach of the U.S. Fed Cup team.

He said the time he spent working with King was one of the greatest experiences of his coaching career.

“She was very patient with me as a young coach coming up through the ranks,” Dancer said. “She meant so much to me in just modeling her energy and enthusiasm about how she goes about everything.”

Dancer’s connections to big names in the sport did not end at Navratilova and King.

In 1998, he transitioned to coaching professional tennis for the Delaware Smash of World Team Tennis. He coached the team through 2004, although the season only lasted a few weeks during each summer.

“There was something like 58 years of professional experience between four of our top players,” Dancer said. “It was nothing short of remarkable.”

Along with the players that made up the bulk of the experience, such as Patrick McEnroe, Mary Jo Fernandez and Jim Grabb, there were also a few new age players to come under Dancer’s tutelage, including Lindsey Davenport and current world No. 1 Serena Williams.

Having been all over the map and having worked with some of the top players in the game, Dancer brought immense experience with him to Illinois when he became an associate head coach in 2004 before ultimately becoming the team’s head coach in 2006.

Over the last decade, Dancer has maintained the Illini’s status as a perennial powerhouse. Looking forward to what’s next in his career, Dancer said he didn’t know what was in store, but that he doesn’t see himself leaving what he’s built.

“People always ask what’s next, and for me it’s going to be here at Illinois.”