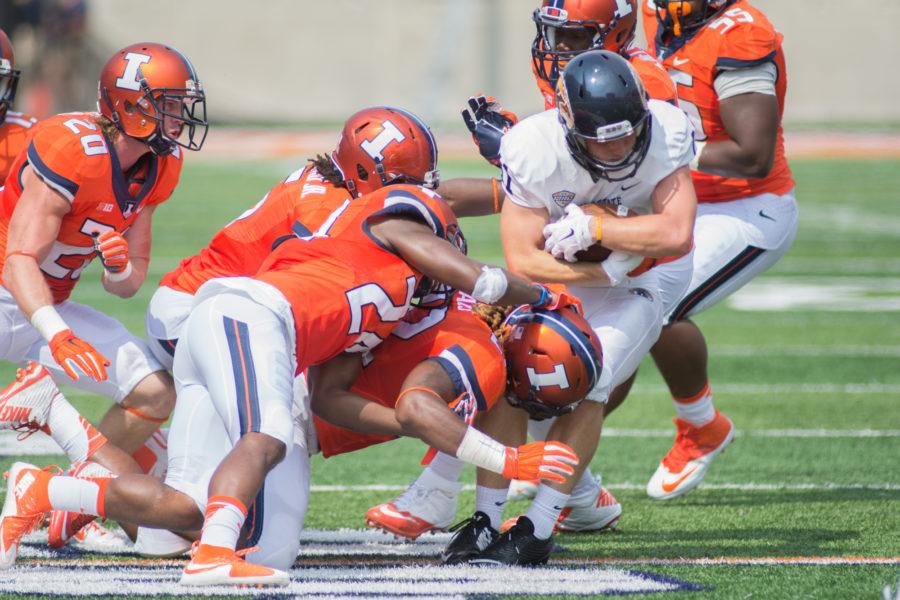 Illinois linebacker Mason Monheim was ready for Kent State running back Nick Holley to run the ball on the first play of the Illini’s game against the Golden Flashes on Saturday.

When the junior rusher attempted to press through the scrum at the line of scrimmage, Monheim appeared out of the bundle of humanity and brought Holley down to the ground for a four-yard loss.

The senior linebacker rose and gave a yell; a sigh of relief.  He and his teammates had lost a coach the week before and the season opener was delayed a day because of inclement weather.

After all of the off-the-field commotion, Monheim finally got to play the game he waited for all summer to play.

“I noticed a difference where I was standing. I saw guys flying around,” head coach Bill Cubit said. “There was a lot of good speed there, I saw good physicality there and that was great to see.”

The Illini followed Monheim’s tackle with a sack and an incomplete pass, forcing Kent State to punt the ball. Illinois’ defense forced five three-and-outs in the game, which created good field position for the offense. Kent State finished with 245 yards — 186 passing and 59 rushing — and scored three points on a field goal against

Players also took advantage of the Golden Flash’s mistakes. Monheim, Eaton Spence and Taylor Barton each intercepted Kent State quarterback Colin Reardon and the Illini scored a touchdown on each of the following drives.

The three interceptions were a welcome surprise to the players and coaches — Illinois only had seven interceptions last season. Turnovers have been a point of emphasis for the players in the offseason and the results proved to beneficial in Saturday’s win.

“I just liked the way guys tried to take the ball away,” co-defensive coordinator Mike Phair said.  “That’s been an emphasis that we’ve been talking about, taking the ball away and now we have to score, we’re trying to do that and that’s the next step we need to make.”

Illinois’ defense was one of the worst in the Big Ten last season. Players missed tackles and reads last season, often leading to big plays and scores. The mentality seemed different in Saturday’s game. When the defense broke down in coverage during the second quarter on a pass from Reardon to Kris White, Illinois safety Clayton Fejedelem sprinted down the field to catch up to White and tackle him inside the five-yard-line.

The Illini held at the goal line and blocked the field goal attempt that followed and Kent State ended the drive with no points.

Cubit said he loved to see the kind of effort Fejedelem had on that play. After a summer of hard work, the coach and his players said it’s nice to finally show the fruits of hard labor.

“Last year, the defense dropped the ball during a lot of games, we didn’t always start fast defensively,” Monheim said. “We didn’t necessarily say ‘let’s start fast,’ or that kind of thing, but we wanted to start fast, play fast and finish fast. We just have that great of a group and we’re able to do that.”