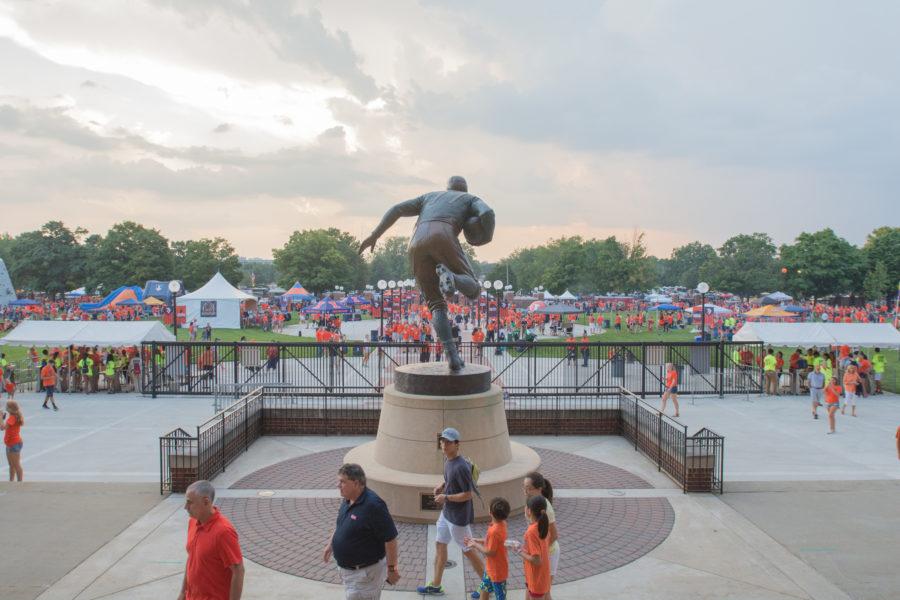 At a season opener filled with changes, Illinois students had plenty to say about the new additions and subtraction at Friday’s scheduled game against Kent State.

Whether it was about the new Grange Grove or coaching changes, students were generally positive about the tone this season will take. However, as the weather changed, students grew frustrated with the situation and ultimately were disappointed when the first game was postponed. Here’s what some had to say:

Outside the Tailgate around 6 p.m.

On Grange Grove: “It’s my first time here and it’s gorgeous. We have pretty big tailgates at our school, but this is beautiful. It looks like everyone is having a great time, you got the concert going and it’s just a great place to do it, right by the park and everything. This is a lot bigger, you got a lot more participants. Pretty much at our school, it’s just one big parking lot and you have a couple people in a grass field. But this is perfect, it’s a big space with everything going on.”

Brianna Shere, Senior in Block I

On this season and the new coach: “I’m excited to see a bunch of the changes, especially with coaching. Losing Beckman as our coach might be a different scene, I don’t know. I guess, it gives them a different perspective because they’ve had Beckman the past three years so maybe the new coaching might help them because we’ve struggled the last three years.”

On what Grange Grove means for Bock I: “We have a lot more room so it gives us more space for students to get out. It’s definitely more exposure to more students so getting more students to come out to the tailgates and enjoying our tailgate fun that we have.

On tailgate turnout: “It’s a bigger turnout than previous years. We normally only have the same people come every game. There are definitely new faces I’ve never seen before.”

On her first game as an Illinois student: “I was a cheerleader in high school. I never really knew how football worked, so I’m going to learn the rules tonight.”

On Grange Grove: “It’s great out here. I didn’t realize how big the actual space was. I’m glad to see it’s catching on. A lot of people knew what it was but now that people have seen how much fun and how much of a success it was, they can tell their friends to come back and also come out here. I’d really like this place to be packed wall to wall and I think within the next couple games, we could really get it that way.”

On this season and the new coach: “Honestly, I think we’re going to do better. I was never a fan of Beckman. You can’t get much worse than 4-20 or something like that in the past few years. Now, it’s looking bright.”

On losing Beckman: “Personally, I was never a big fan of Beckman. He’s old school coaching which I love, but I never thought he did it the right way. I just bought my first ticket since the beginning of my freshman year. I bought only one ticket in the Beckman era. Not necessarily to say he was the reason, but its definitely a little more convincing. I’m a little more upbeat with him not behind the reigns.”

On the attitude for this season: “Most of my friends don’t really care about sports, they’re here to support the team regardless. I feel that the general attitude of the students is that we just want a winning football program. We don’t care who’s behind it, but we want someone to show us at least a glimmer of hope.”

On Grange Grove: “We just went straight to the game last year and it’s nice having this option now. You get to hang out before the game so it’s definitely cool.”

On this season and the new head coach: “I’m hoping for a better outcome than last year and we’ll see how it goes. I think it’s a fresh start so we can build off this and get some momentum off the new coach and see where he takes us.”

The Great Hall around 8 p.m. during the rain delay

On staying or leaving: “I’ll give it another 30 minutes and if anything happens, I think I’m just going to head on out. I mean it’s sucks to be a player because I know they were ready to play today but hopefully they can resume the game tomorrow.”

On game expectations: “The weather was nice and sunny right before kickoff and I wasn’t really expecting this to be honest.”

On her first game as an Illini: “Both my brothers went here and one’s actually a senior right now and the other graduated, so I’ve been here like six years It’s more exciting and then I feel like I know more people and I feel more of the community. Whereas before it was more just like ‘oh I’m here as the younger sister.’”

On the weather situation and being stuck inside the Great Hall: “It’s not very fun and it’s very hot in here too.”

On staying or leaving: “We’re not really sure, we’re hoping until the rain lights up. We’re hoping the game starts, but then it’s still like an hour after that so then we might just head out because we have to rush tomorrow.”