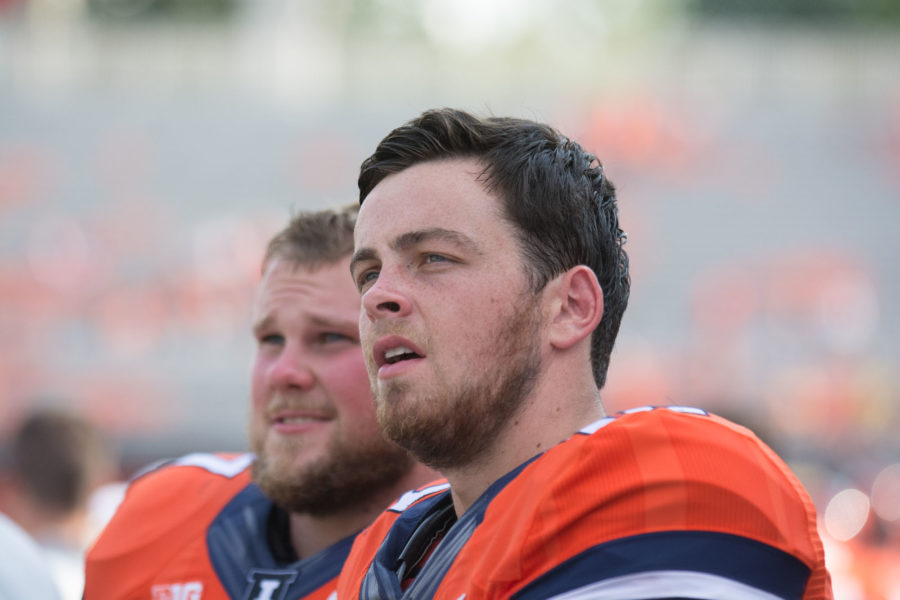 Wes Lunt sat in his pads at his locker. He waited an hour. Then, he walked around another hour. As the rain fell and strike after strike of lightening lit the night sky, all Lunt could think was “not again.”

But unlike last year’s rain delay against Texas State that lasted just under two hours, scheduling and Mother Nature had a different idea in mind for Kent State: The game was called for the night and postponed until the following afternoon.

The starting quarterback returned to the hotel with the team. There he struggled to fall asleep, staying awake past midnight, high on the adrenaline from the prospect of a season opener and a walk through the newly added Grange Grove.

When Lunt finally got on the field the following day, he went 11-for-19 with 162 yards and four touchdowns, each to a different receiver. Lunt tied his single-game best as an Illini with those four touchdowns — he achieved that feat in last year’s season opener against Youngstown State.

These numbers were not even for the entire game: Lunt was taken out with about six minutes left in the third quarter in favor of giving redshirt freshman Chayce Crouch an opportunity in the pocket.

Though he gave an exciting opening performance, Lunt still thought he could do better. His biggest self criticisms were wanting to improve upon his accuracy and timing while also wanting to work with the offensive line on getting set faster. However, Lunt was proud of the work he and his teammates put in the first game.

“Watching the film, I felt I moved away from pressure just slightly when I needed to, but there wasn’t much pressure,” Lunt said. “The line did a great job. Overall the hard work has paid off so far.”

“(He’s) understanding exactly what he’s doing out there and getting rid of the football quicker,” head coach Bill Cubit said. “It really looked like he just has a great command, and the communication between him and Ryan (Cubit) was outstanding.”

That relationship has since developed more as Ryan Cubit took over the quarterbacks in April. Lunt has learned to work with both Cubits and has appreciated the different aspects of their coaching styles.

“Ryan’s a lot more calm, I’d say,” Lunt said. “He’s a pretty even-keeled guy, he doesn’t really get too high or too low, which is really nice. But Coach Cubit always brings intensity and you feed off that. I like to be coached hard, so when I’m not doing something right, I don’t like getting yelled at, I like people expecting a lot out of me. There’s a lot of similarities, but some differences.”

With his two coaches and a year under his belt, Lunt has come into his own as the starting quarterback position and become a leader in his own right.

Giving the younger quarterbacks advice and improving on his own pocket presence, Lunt has come a long way since last year’s rain delay against Texas State.

“Wes is at a level right now where the conversations are really advanced,” Ryan Cubit said. “We’re able to talk about little things, little nuances on the other side of the ball that are going on. He can pick things apart, and you can have conversations that are fun as a coach. You can talk about so many other things rather than just the basics of football so he’s in a good position right now. He’s healthy. If he stays healthy, he’s going to have a tremendous year.”