Illinois football to face an up-tempo offense in North Carolina 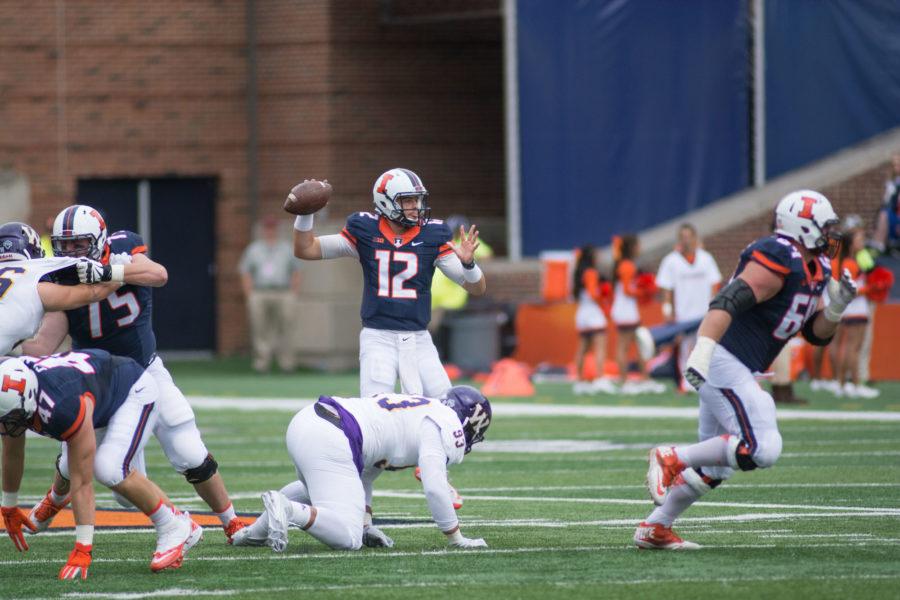 Wes Lunt (12) sets up to throw a pass in Illinois' game vs. Western Illinois.

Illinois football has started fast and outscored opponents in its first two games. But when the Illini travel to North Carolina this weekend, the tempo will be the team’s focus.

Controlling the pace has allowed the Illini to not only set a comfortable point margin between them and opponents but also give younger players a chance to see the field.

It’s meant that key players like quarterback Wes Lunt and running back Josh Ferguson, who were playing all four quarters at this time last season, are being hit less and will be fresher for the first road game.

Illinois’ defense, which allowed its opponents to only score three points on the year, will have its first game against a dual-threat offense Saturday.

The Tar Heels’ offense features quarterback Marquise Williams who is on the brink of breaking rushing and passing records at the school. This type of pocket presence, which head coach Bill Cubit said is sometimes difficult to watch on film, will present a challenging threat.

“He’s a good scrambler, but we’ve seen too many quarterbacks that can scramble,” defensive end Jihad Ward said. “It’s part of playing football. The biggest challenge this week will be just maintaining what we do. Getting off the ball and setting up the edge and making sure the quarterback does not get out of the pocket.”

To keep the defense fresh, it has simulated chaotic situations at practice.

The offense has a similar strategy. Quarterbacks coach Ryan Cubit said getting back to fundamentals has been his goal in practice this week. He has been tiring out his side in order to be ready for the quick pace Saturday.

“We’re not going to win this game with scheme,” Ryan said. “It’s going to be us getting the right spots, playing the game fast and playing with speed. It’s taking care of all the little mistakes we’ve had in the past two weeks and correct them and play clean football.”

Those mistakes include three fumbles and one interception in last week’s game against Western Illinois.

Although the miscues did not hinder the team — Illinois only lost 57 yards off turnovers and Western was shutout — it’s a focal point for Illinois as the tempo increases this week.

“This week, (the confidence is) going to get tested,” Bill said. “It’s been fairly easy the first two games because things have really been positive for us. Now it has not been easy to accomplish that, but it’s been fairly easy because nothing is really going against us as much except for the turnovers.”