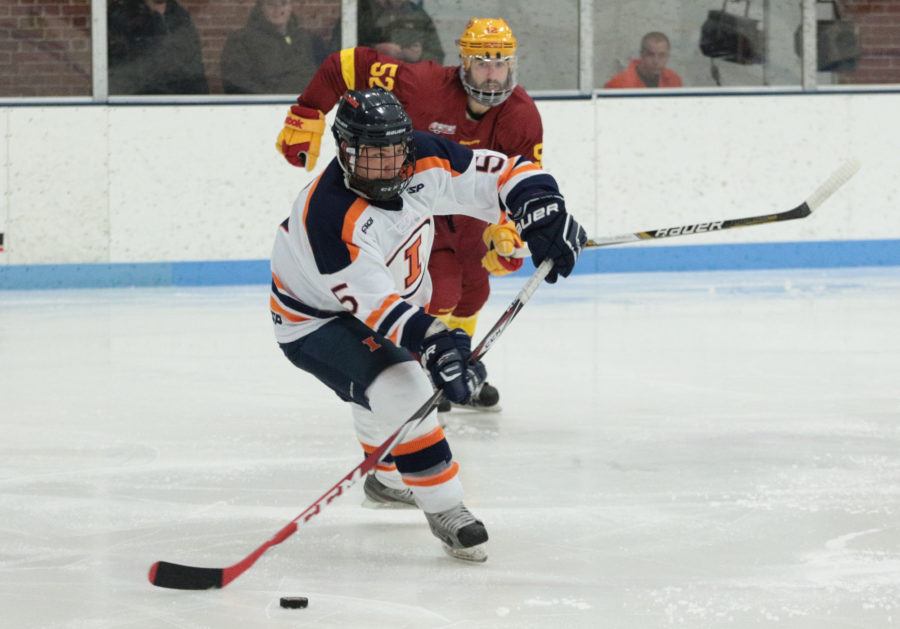 Illinois’ Joey Caprio goes for a pass during round one of the CSCHL hockey tournament v. Iowa State at the Ice Arena on Friday, Feb. 20, 2015. Illinois won 2-1.

The Illinois hockey team enters Friday’s home-opener 0-0-0, and no one is more thankful for a clean slate than the Illini players and coaches.

Last weekend, the Illini traveled to Springfield, Illinois, to take on the Jr. Blues — a Tier II Junior A team of the North American Hockey League — for a two-game exhibition series.

It was a series Illinois was not ready for, as the team dropped both games by a combined margin of 13-0: a performance that is in stark contrast to the team’s No. 12 ranking in the American Collegiate Hockey Association.

With pre-season expectations now in check, Illinois wants to make a statement on its home ice against Michigan State.

“Obviously, we feel like we underperformed,” Head Coach Nick Fabbrini said. “One of the most important things you need to be able to do as a hockey player is respond. Whether it’s within a game after giving up a goal or after a tough loss.”

Although the Illini went 3-1 against the Spartans last season, had a few plays gone differently, the record could easily be the opposite. In Illinois’ home-opener against Michigan State last season, the game went into a four-round shoot-out in which Illinois prevailed 5-4.

Hockey is a Division I university sport at Michigan State — unlike Illinois’ club status — meaning the Spartans are a tier above the ACHA in competition.

“When there’s a lot of familiarity between two teams like us and Michigan State, a lot comes down to how much guys want it and execution,” Fabbrini said. “We know what they like to do offensively and they have a good idea on how we want to play; I don’t expect a wide-open game.”

Despite knowing they’ll have their hands full this weekend, the Illini always like their odds when playing at the “Big Pond”, Illinois’ historic 2,000-seat home arena — one of the largest ice rinks in North America.

“Last year, we had one of our biggest crowds at the home-opener, and with it being alumni weekend, there will be a great atmosphere,” defenseman Joey Caprio said. “It’s going to be a good weekend to bounce back and get back to what we like to do.”

According to fellow defenseman Austin Zima, the Illini strive to play fast, create scoring opportunities and take advantage of their home arena’s increased dimensions. It’s no secret that Illinois is one of the most well-conditioned teams in the ACHA, covering 30 more feet of ice than the average NHL player every practice. Both the coaches and players, however, know that speed and stamina alone don’t put the puck in the net: something the Illini have failed to do thus far in the season.

If Illinois wants to put a “1” on the scoreboard and in the win column, it’ll have to take a major step forward from last weekend.

“Our season expectations haven’t changed,” Zima said. “We know we have some of the most elite goal-scorers in the country and a team that can compete for national championship. We’re going to continue to push, and once we put everything together, it’s just a season that looks really bright.”