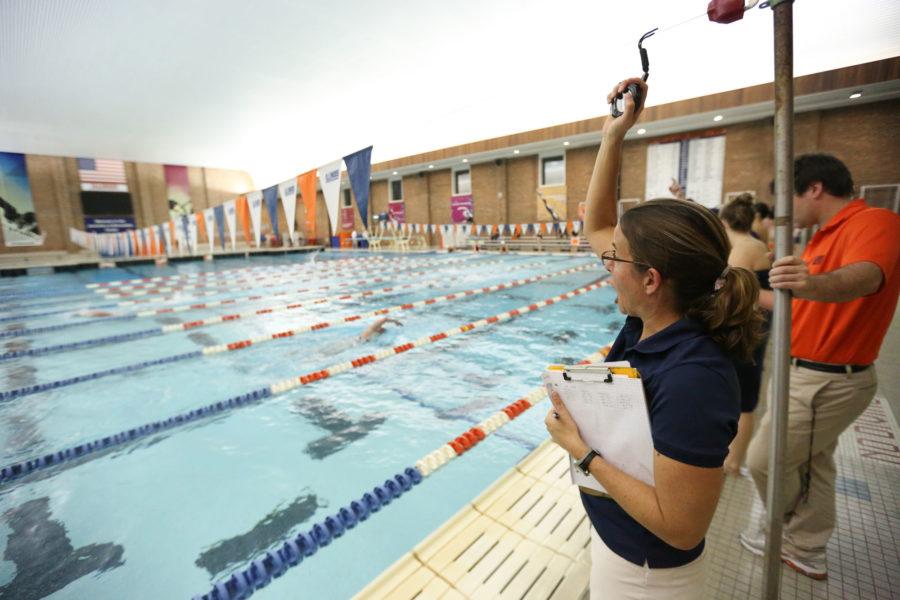 Illinois’ head coach Sue Novitsky cheers on her swimmers during the meet against Illinois State at the ARC, on Friday, Nov. 1, 2013. The Illini won 206-94.

Head Illinois swimming and diving coach Sue Novitsky will finally get an opportunity to gauge how her team’s hours of practice and summer swim schedules helped her players in the teams’ first intra-squad meet on Oct. 2.

The Illini will compete against each other at the ARC pool, their home arena and practice facility. The team will get in some competitive reps, all in preparation for its first competitive meet against the trio of Eastern Illinois, Western Illinois and Olivet Nazarene two weeks later.

Novitsky said she is pleased with what she’s seen from her athletes so far,

”I feel pretty good, the team’s been working hard,” she said. “We have been doing some test sets to see where we are in terms of our fitness levels and everything, and I like the practice we have been putting in, progressing towards the meet.”

Freshmen prepare for their first taste of collegiate competition.

With the first meets approaching, nerves are beginning to set in for some of the freshman who will be swimming at the collegiate level for the first time.

Freshman Madeline Kuhn has some first meet jitters, but has already gotten accustomed to the life of a Division-I athlete.

“It’s really nerve-racking but also really exciting,” Kuhn said. “It is so much work, but it’s so worth it already. Being able to say you’re a D-1 athlete is just so cool.”

Novitsky said she is curious to see how her freshman will react to the spotlight of collegiate competition.

“Hopefully they take it that they have swam hundreds of meets in their lifetime and this is just another one, they are just wearing a different cap,” Novitsky said. “Some get nervous and make it into something huge but some swim really fast which is great to see … It’s really about talking it through with them and just reminding them to get themselves ready like they normally do.”

Senior swimmer Lori Lynn takes on a lot of responsibility for her team. As a co-captain and mentor to some of her younger teammates, Lynn takes on a big role for the Illini.

Lynn eased into her roles on the team, and part of the reason may be due to her schooling prior to her tenure at Illinois. Lynn was homeschooled, and she said she feels that it has helped her moving forward academically and competitively.

“It really helped me with being more dedicated to my work. It was internally motivating and that helped a lot,” Lynn said.

People she knew questioned Lynn’s decision of coming to a bigger school at first, but she said that feels so long ago as she prepares to play out her final year for the Illini.

“A lot of people wondered how I was going to do it, being homeschooled then coming to U of I,” Lynn said regarding her transition. “But I did really well, and I wasn’t too overwhelmed with all the people. I really like it.”