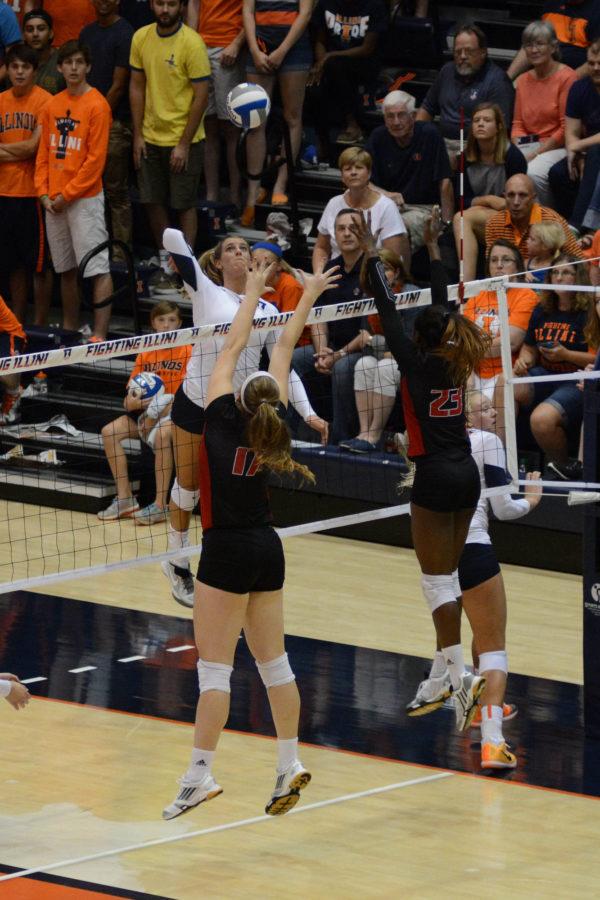 Illinois’ Jocelynn Birks (7) attempts to spike the ball during the game versus Louisville at Huff Hall on Friday, August 28, 2015.The Illini won 3-0.

After going 2-1 over the weekend, the Illinois volleyball team (9-2) kicks off conference play at Maryland (10-4) on Friday and at Rutgers (3-9) on Saturday.

Head coach Kevin Hambly’s No. 9-ranked squad is the second highest-ranked Big Ten team behind the defending champs, No. 1 Penn State (11-0). The strongest volleyball conference in the nation boasts a total of seven schools in the top 25.

Hambly, who’s been with the program since 2004, said the intensity skyrockets once the non-conference slate is through.

“The level of play picks up a ton,” Hambly said. “There’s familiarity: You know what everyone’s tendencies are.”

He went on to say such familiarity makes Big Ten foes a little easier to defend. Though teams feature new players, their systems bear little to no changes.

“The Big Ten is just a whole different ballgame,” she said. “You always have to grind out games, and it’s very defensively focused.”

Defense was the theme in Illinois’ loss to No. 7 Arizona State on Saturday. Both teams had trouble scoring, especially in the first set: The Illini and the Sun Devils finished the opening period with .175 and .091 hitting percentages, respectively. According to Hambly, the grind-it-out match had a Big Ten feel and was good preparation heading into the conference opener.

The Illini hope to carry this past weekend’s sound defensive effort into Friday’s tilt with the Terrapins. Redshirt senior Adreené Elliot, whom Hambly called a “freak of an athlete,” will pose the toughest matchup for the Illini. The 6’3” outside hitter from Winston-Salem, North Carolina has 146 kills and 50 errors through 14 matches.

Maryland won its first nine games of the year but has lost four of its last five. Two of those losses came at the hands of ranked opponents: No. 6 Washington and No. 3 Southern California each swept the Terps.

Prior to facing ASU, Illinois hadn’t lost since Sept. 4 against No. 8 (then-No.2) Stanford. Hambly isn’t worried about Saturday’s hiccup — he’s confident that Illinois will peak midway through Big Ten play.

Despite the loss, redshirt senior Jocelynn Birks said a big takeaway from the ASU match was Illinois’ ability to regroup when things go awry.

The starting outside hitter sat out Friday’s sweep of Texas Southern and finished with a combined 22 kills Saturday against UNLV and ASU.

Hambly often harps on the fact that the Illini treat every opponent the same and make quick work of underdogs.

“There’s been a lot of matches where we’ve just taken people’s will — they didn’t wanna play us anymore,” Hambly said.

Though Hambly noticed a difference against the Sun Devils.

“We took ASU’s will for a little bit,” he said. “But as a good team does, they responded.”