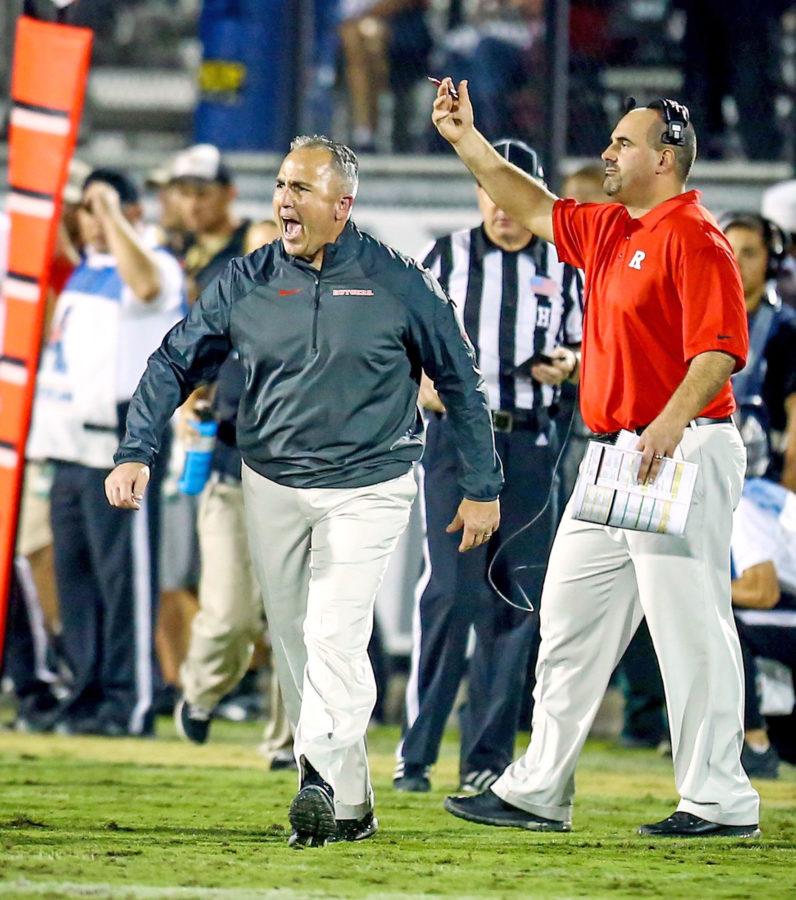 Just as the Big Ten season is getting interesting, the conference is once again bogged down in the mire of another looming scandal.

The most recent culprit of conference controversy is Rutgers. With arrests and dismissals piling up, and the recent suspension of head coach Kyle Flood, the program has suddenly found itself in dire straits.

Whoever is to blame for the disarray is irrelevant as the program now deserves a thorough investigation by the Big Ten and the NCAA.

Though the issues at Rutgers may have gotten lost in the shuffle of everything occurring on the field, the problems are indicative of the larger, systemic issues inherent in college sports.

Since the start of the season, Rutgers has seen five players arrested — one for a home invasion and four others for assaulting a group of students back in April. All five have since been dismissed.

Sure, the team made the right decision, but the mere fact that five players have been involved in legal trouble over the course of a couple months is tremendously disconcerting.

It equally indicates a pretty obvious lack of institutional control at Rutgers.

To make matters worse, the team’s star wide receiver Leonte Carroo was recently suspended indefinitely by the program for a domestic abuse incident. Carroo is accused of throwing a female student to the ground outside the team’s facility after a loss on Sept. 13 against Washington State.

Carroo, one of the Big Ten’s better talents, now faces a bleak future at Rutgers as there are questions regarding his character as it pertains to his NFL future.

On top of all of this, there’s the Flood situation.

Just last week Flood was suspended for three games after allegations surfaced about his improper involvement in the academic affairs of some players. Flood violated long-standing rules barring coaches from corresponding with professors by pressuring academic staff for grade changes for Rutgers players.

To put it bluntly, these controversies swirling around the program are serious and cannot be taken lightly by the Big Ten and the NCAA.

The situation at Rutgers is worse than the scandal that involved conference counterpart Illinois and former head coach Tim Beckman.

Illinois’ controversy involving allegations of abuse to players is serious in its own right, but the issues at Rutgers extend to criminal activity by multiple players and breaches of academic ethics by the head coach.

Similar to the situation at Illinois, the University administration and the athletic department launched an internal investigation, choosing to reprimand Flood rather than let his behavior slide.

It is admirable that Rutgers has acted swiftly in suspending Flood for three games, though this decision does not go far enough.

The athletic department should opt to suspend him indefinitely — or even dismiss him as Illinois did with Beckman.

It is also not enough for the issues at Rutgers to remain an internal matter to be solved by the University. This is a clear case where the NCAA and the Big Ten should devote resources to a thorough investigation conducted by individuals with no connection to Rutgers.

With college sports still reeling from an investigation that revealed widespread academic fraud going back years at North Carolina, it is important that the powers that be in college football take a hard stand against improper academic conduct.

Unlike usual college football scandals that involve recruiting violations or players selling memorabilia, scandals of ethics in academics completely betray the concept of the “student-athlete” — a concept now laughably paradoxical.

It would be completely irresponsible for Big Ten administrators to use the conference’s recent rise back to national prominence as a shield to avoid demanding answers from Rutgers.

Rutgers may be a program of little consequence nationally but is nonetheless critical for the Big Ten’s future credibility to investigate the program — the scandal at Rutgers is simply further proof that ethical standards and college football are nearing opposite ends.

Moreover, If the allegations pinned on the program are true, the NCAA ought to push for harsh sanctions on the football program.

Maybe a multi-year postseason ban and limits on scholarships would do the trick.

Dan is a senior in Media.
[email protected]