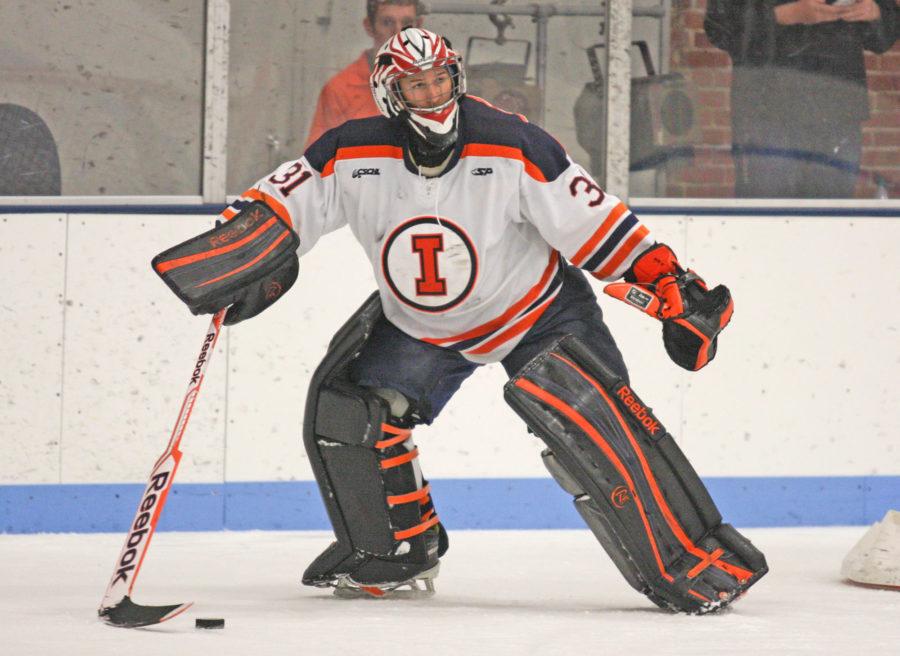 According to junior captain Austin Zima, whenever the team talks about the Sooners, the conversation always goes back to the 2014 ACHA tournament, when the Sooners eliminated the Illini.

“They ground us into a pulp,” Zima said. “They just wore us down and then beat us into the ground. It was bad.”

The wounds from that game have not healed, and Zima said that the Illini (2-0) look forward to visiting the Sooners (1-1) this weekend.

The Sooners are notorious for having big, physical teams. The Illini will count on their speed to combat the Sooners’ size.

Head coach Nick Fabbrini said the Sooners run a pro-style offense, something that the Illini have yet to face this year. This means the Sooners are going to try to get the puck deep and use their size in front of the goal.

Combating this will require a full team effort from the Illini in the defensive zone.

“I feel like we played well on both sides of the puck,” forward Eric Cruickshank said. “Our offense was getting back and helping in the defensive zones.”

The Sooners play on a standard NHL-size rink, and with their size, they like to take up a lot of space on the ice. Zima said that does not stop them from picking up the pace of the game whenever they feel like it.

“We really just need to keep our feet moving the entire time,” Zima said. “We may be considered a smaller team, but we can be faster on the ice.”

Zima said the team can not afford to let the Sooners’ size take them out of their rhythm. It will be important to get the puck to the most efficient areas.

The Sooners had two players who went to Europe last year for the World  University games — right wing Jordan Greenberg and defenseman Mico Solorzano — but Fabbrini doesn’t consider those two to be Oklahoma’s best players. Both Zima and Fabbrini agreed that Sooners defenseman Cory Ramsey concerns them the most.

“(Ramsey) is a defender, but he is really aggressive and loves to attack on offense,” Zima said. “With a team that gets the puck deep like Oklahoma, it is easy to forget about the guys coming from the outside. That’s when he is most dangerous.”

The Illini may be eager to take on the Sooners, but the coaching staff has yet to decide who will be starting in goal. Fabbrini said the staff would decide at practice this week after evaluating the play of Joe Olen, Zev Grumet-Morris and David Heflin.

Illinois is looking at these games as its first real test of the early season.

“It was nice to get those wins last weekend,” Zima said. “But we know that was also the easiest weekend we will have all season. It only gets tougher from here.”