Grading Illinois football after its win over Middle Tennessee State 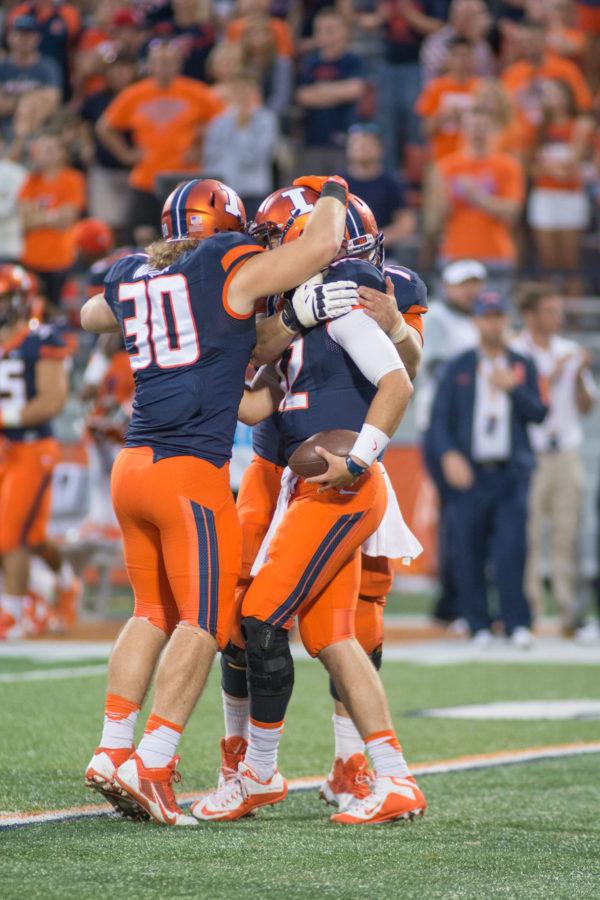 Wes Lunt (12), Jim Nudera (30), and another player celebrate after a successful play in Illinois’ game vs. Middle Tennessee.

Illinois’ offense looked dysfunctional for much of the game. Quarterback Wes Lunt led the team on a seven-play, 75-yard drive to start the game that culminated with a five-yard touchdown pass to Malik Turner.

The offense failed to be productive after the opening score. Lunt did finish with 238 passing yards and a touchdown, but didn’t seem to be on the same page with his wide receivers for much of the day. He said after the game that he saw different defensive schemes than his receivers, which led to poorly executed routes or overthrown balls.

Lunt and the offense managed to drive down the field for kicker Taylor Zalewski to hit the game-winning 51-yard field goal, but too many missed opportunities continue to be a problem for the passing game this season.

Running back Josh Ferguson was taken out late in the game because of fatigue — he finished with 83 rushing yards on 20 carries — and freshman Ke’Shawn Vaughn took advantage of the opportunity, rushing for 80 yards and a touchdown.

The Illinois defense seemed like it wanted to make up for the 48 points it allowed against North Carolina a week ago. The Illini contained the Blue Raiders for much of the game and created turnovers despite the offense’s inability to gain momentum.

Returning from a three-game suspension, Caleb Day blocked a punt and Clayton Fejedelem fell on it in the end zone to give the Illini six points. Dawuane Smoot forced a fumble in the second quarter that was picked up by Jihad Ward and returned to Middle Tennessee State’s 11-yard line before he fumbled the ball and it was recovered by Chunky Clements. That set up Zalewski’s first field goal of the day.

The defensive line was as active as it’s been all year, forcing three sacks — two courtesy of Smoot. Illinois did allow 165 passing yards in the fourth quarter, the same amount it allowed in the first three quarters. It also allowed Middle Tennessee State to take the lead and gave the Blue Raiders an opportunity to win at the end of the game.

The kick return team had another difficult game. V’Angelo Bentley had a hard time finding gaps to squeeze through and made a costly mistake in the second quarter. He failed to call for a fair catch on a punt and Illinois was forced to start its offensive possession inside the 1-yard line. Middle Tennessee State forced a safety on the very next play, which Bentley could have avoided had he signaled for a fair catch.

But kicker Taylor Zalewski made up for any deficiencies in the return game with a serious display of confidence. The senior made a 51-yard, game-winning field goal despite missing an attempt earlier in the game. The made field goal was a nice redemption for a kicker who had missed the same kick a week before. He was 2-for-3 on the day and now stands at 6-for-9 on the season. He is also perfect on 16 extra points thus far.

Head coach Bill Cubit had a mixed day at the office.

His play-calling was also limited due to injuries to tight ends Tyler White and Tim Clary. Cubit mentioned after the game that he should’ve attempted a field goal instead of attempting to go for it on fourth down inside the Middle Tennessee State 5-yard line early in the second half.

The head coach did manage to settle his team down despite Middle Tennessee State’s momentum and his decision to attempt field goal at the end of the game — rather than go for a first down — paid off.