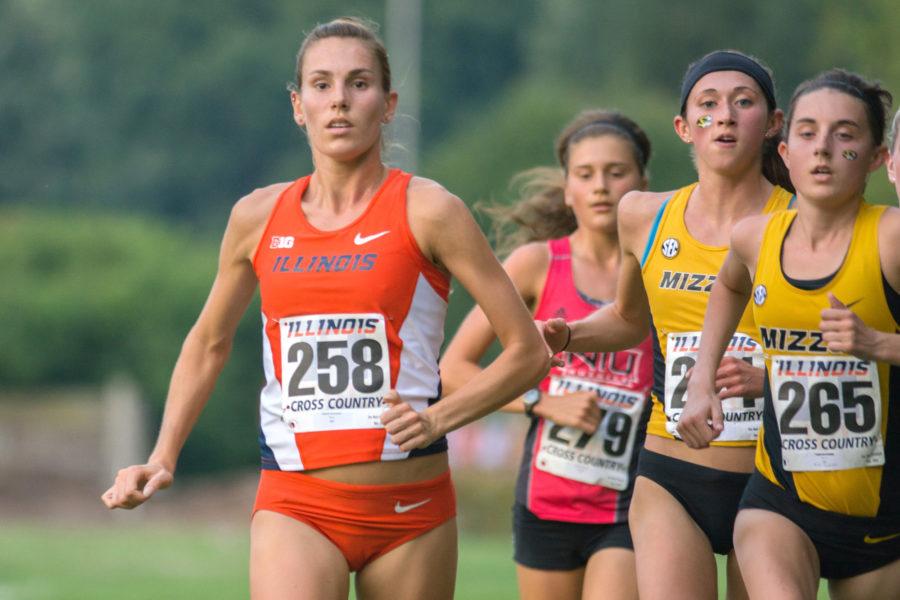 Jovanie De La Cruz The Daily Illini Alyssa Schneider (258) keeping her cool and staying ahead at the Illini Challenge 2015 at the Arboretum on September 4.

In 2014, the Illinois women’s cross-country team headed to the Roy Griak Invitational in Minneapolis, and left disappointed.

The team placed ninth out of 26 teams at Saturday’s meet, improving on last year’s 18th-place performance at the course, and head coach Scott Jones was pleased with the results.

“Across the board, I think we were happy with what we did,” Jones said. “I thought it was a positive experience for us. We were better in our preparation (for the meet) and focus.”

Redshirt senior Alyssa Schneider led the way for the team, completing the race in 21 minutes and 27 seconds, good for fourth overall. Boise State finished first in the team competition, followed by Michigan State and host Minnesota.

It was the third-consecutive meet that Schneider has finished first for the Illini.

“I was really happy with (the performance),” Schneider said. “Individually and as a team we made huge improvements from last time out.”

Schneider pointed out that having raced the course last year, she knew she had to take a better approach to the hilly course. Starting off conservative and gradually increasing her speed throughout the race, the strategy ended up as a success.

Jones was also encouraged with Schneider’s performance, adding that she has been working hard in practice to get better everyday.

“Her fitness is at a very high level,” Jones said. “It was a fantastic race. Having that senior poise and maturity really helped her out.”

Finishing second for the Illini was senior Britten Petrey, who completed the race in 22:41.

Following right behind her was junior Hanna Winter with a time of 22:51. Petry finished 46th overall and Winter came in 58th.

Junior Valerie Bobart and sophomore Denise Branch were next to cross the finish line for the Illini, finishing in 23:13 and 23:17, respectively. The meet was Branch’s first time running in a large college cross country environment after being injured last season. Jones was impressed with how Branch carried herself out on the course and was happy that she could take in the race experience with 26 different teams present.

Sophomore Audrey Blazek followed up after Branch, completing the race in 23:27. Junior Kim Seger was last to cross for Illinois, finishing with a time of 25:06.

Jones said he liked how Blazek set the pace early for the team, which contributed to the overall team success at the invite.

Blazek said she wanted to make sure the team started out conservatively and saved some of its energy toward the latter parts of the race.

“I heard a lot from the girls who raced it last year that you can’t go out like you do in a normal race, the course just doesn’t really allow that,” Blazek said.

The team will hope to use this as a momentum lift going into its next race.

“We want this to be a confidence boost for all of our runners,” stated Jones. “I think we just need to keep grinding and keep our feet on the ground moving forward.”

The Illini will have a couple of weeks off before they head to Louisville on October 17 to compete in Pre-Nationals.