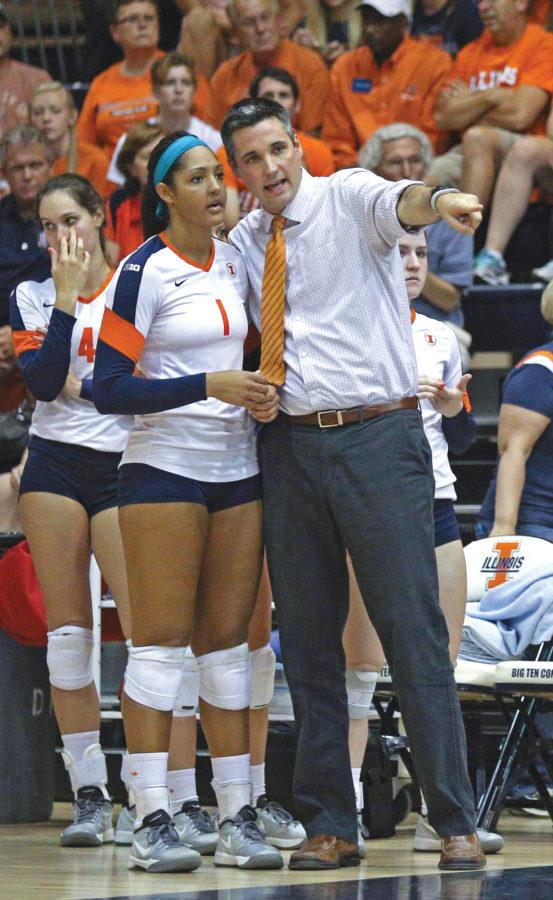 The No. 7 Illinois volleyball team’s wins against Maryland (10-6) and Rutgers (3-11) over the weekend were near-mirror images of last season’s opening two Big Ten matches. Like last year, the Illini (11-2) began conference play with 3-0 sweeps of the Terps and the Scarlet Knights, led by stellar defensive play.

The Illini will look to carry their lockdown defense to Madison, Wisconsin, on Wednesday night to face a highly efficient No. 19 Badgers squad. Wisconsin is 8-4 and boasts a talented attack steered by senior setter and Aurora, Illinois, native Lauren Carlini, who ranks sixth in the country in assists at 11.58 per set. At Tuesday’s volleyball media availability, Hambly called Carlini the best setter in the Big Ten.

Donnelly is ready for the challenge Carlini poses.

“Wisconsin is really talented and the next two weeks are really gonna test us, but we’ll have a game plan like we do for any other team,” she said. “This weekend brought us confidence.”

Junior middle blocker Haleigh Nelson (2.51 kills per set, .386 hitting percentage) and sophomore outside hitters Kelli Bates (3.28 kills per set) and Lauryn Gillis (3.12 kills per set) round out the Badgers’ offense.

The Badgers coasted through Big Ten play in 2014 — they lost just once, falling to eventual national champion Penn State Nittany Lions. This season, Wisconsin lost its first two conference matches — 3-0 and 3-2 losses to No. 1 Penn State and No. 13 Ohio State, respectively.

Freshman setter Jordyn Poulter is one of many capable offensive players on Hambly’s roster. She looks to add to her 423 total assists and 11.13 assist per set rate Wednesday night. Look for Poulter to connect with middle blocker Katie Stadick (3.05 kills per set, 4.12 hitting percentage) time and again against the Badgers.

“You have a middle that works that hard, you have so many opportunities to feed Stadick the ball, and she’s executing,” Poulter said. “We developed a relationship and trust early in the pre-season.”