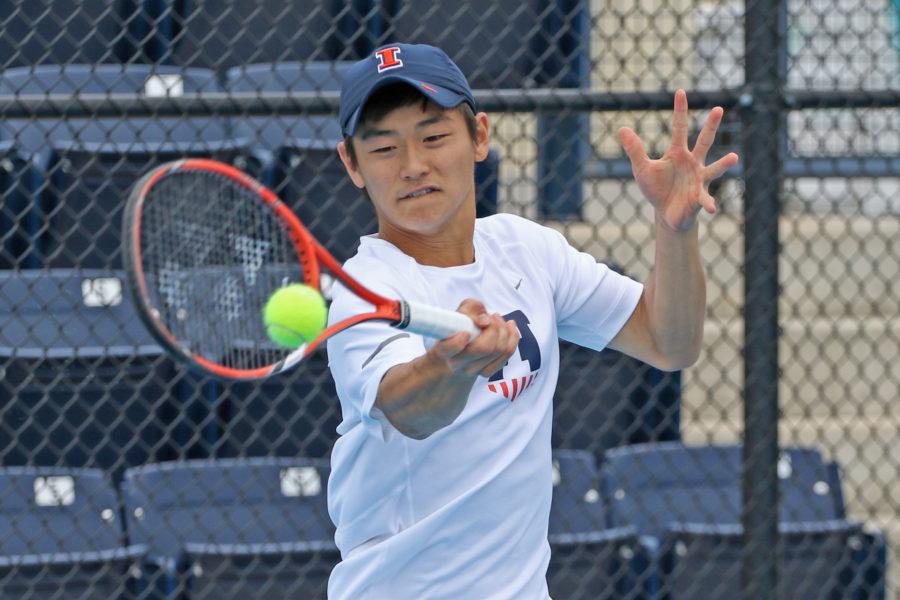 The Illinois men’s tennis team is off and running at the ITA All-American Championships, but for some players, the tournament came to a halt earlier than they wanted.

“It was great to see a strong effort across the board from the team,” Asse said. “Even though Asher didn’t make it past the first round we are really hopeful in what we have moving forward.”

The round of 128 was the end of the road for two of the three remaining Illini.

Matsuya ran into Niclas Braun of Mississippi State, who has yet to drop a match in the tournament. Matsuya was dispatched in two sets, 6-4, 6-3.

The lone Illini left in the pre-qualifying field is Childers, who has made quick work of his opponents through his first two rounds. Childers knocked Drake University’s Bayo Phillips out in the first round, winning 6-2, 6-2. He capped off his Sunday rounds by finishing off Simon Freund of LSU in the second round 6-3, 6-4.

Having not lost a set yet in the early going at All-Americans, Childers says he is confident moving into the third round, but he says that he has a lot more left in the tank.

“I don’t feel like I’m playing at the top of my game, but I feel like I’m competing and staying calm and having fun out there like I have never done,” Childers said. “I feel like the rest of my game will come as I move on and play in even more matches.”

Childers will open his third round of play against 17-32 seeded Vaughn Hunter of Mississippi State for a spot in the round of 32.

Aside from Childers, the only remaining Illinois player is Aron Hiltzik. The sophomore has yet to open his tournament, as the main draw is set to begin on Oct. 8.

“I feel like I belong with the tops guys and my goal for this tournament is realistically to make it to the qualifiers,” Childers said. “If I can accomplish that, then I’ll set another goal to make it to the main draw.”