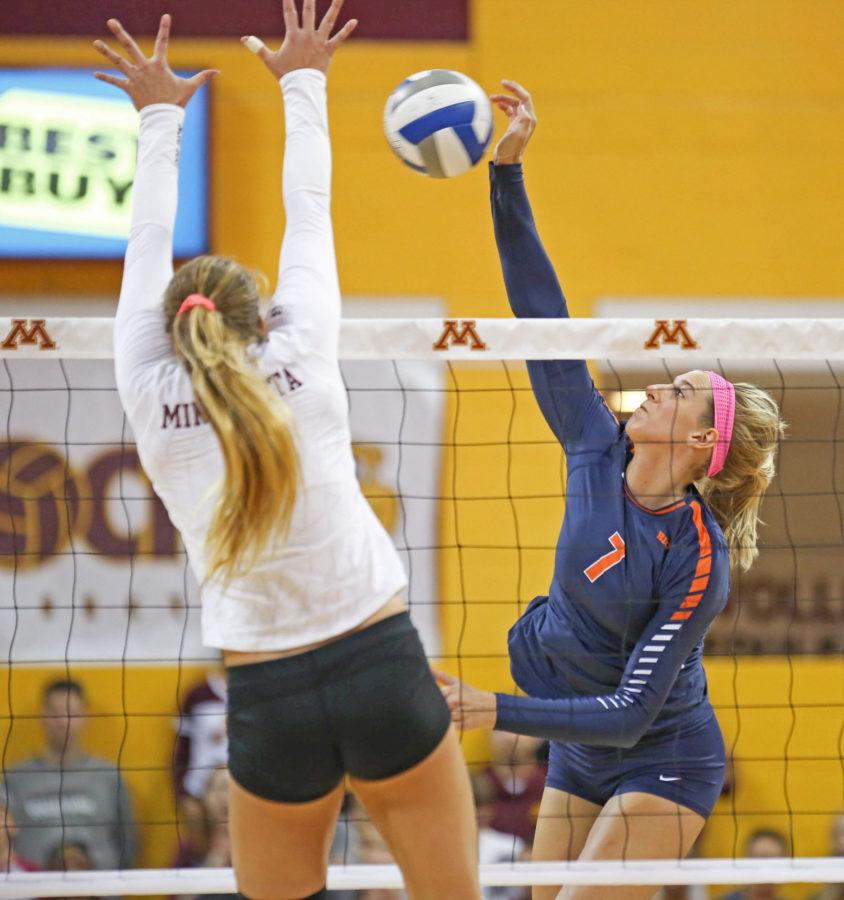 The Illinois volleyball team (11-4) is officially on its first losing streak of the season.RB

The teams traded blows in the first set, which featured 14 ties throughout.

Eventually, with the score even at 24, the Gophers managed to close out the set with two kills from middle blocker Paige Tapp and outside hitter Daly Santana.RB

“I think there were some points we did well and were aggressive in attacking them,” Illini outside hitter Jocelynn Birks said. “They obviously have a lot of weapons on their team and were really aggressive through the whole match.”

After evening up the match in the second set, the Illini found rhythm early in the third set and looked as if they were going to run away with the set.

The offense connected on 22 of 46 attacks and held a 21-13 lead before the Gophers made a late run to close the gap in a 25-22 Illinois victory.RB

The attack was spread between middle blocker Katie Stadick and outside hitters Birks and Michelle Strizak. The trio accounted for 57 out of 69 total kills the team recorded in the match.RB

Setter Jordyn Poulter bolstered the team on both ends, recording career highs in assists and digs with 59 and 21, respectively.RB Unfortunately, her strong performance wasn’t enough to prevent the team’s collapse in the final two sets.

“We didn’t have the right mentality of if we didn’t get the last point, we are getting the next one,” Poulter said. “There was no sense of urgency really, and that showed up in the score.”

Minnesota built off the momentum it gained late in the third set and held Illinois to just 16 points and a negative hit percentage over the next two sets. The Illini committed 17 errors in the fourth and fifth sets, while the Gophers had just four in the same span and 15 in the match overall.RB

Illinois head coach Kevin Hambly said he was disappointed with the way his team reacted when faced with adversity. He said it was difficult for his team to overcome Minnesota’s run in the final two sets, especially with a crowd of 4,000 opposing fans.

“We gave up the momentum because we didn’t work hard enough,” Hambly said. “We gave them a couple of easy points that let them feel better about how they are attacking.”

The team is still searching for a signature win and will get an opportunity for one against No. 1 Penn State at Huff Hall on Friday.RB

Hambly is not concerned with where the team is this early in the season and said it will continue to work on maintaining a high level of play in its first full week of practice in five weeks.

“When the crowd is working against you, you have to learn how to fight through that a little bit,” Hambly said. “It’s something that we have to be addressing and something that we are working on. We identified it in the match; we just couldn’t turn the tide.”