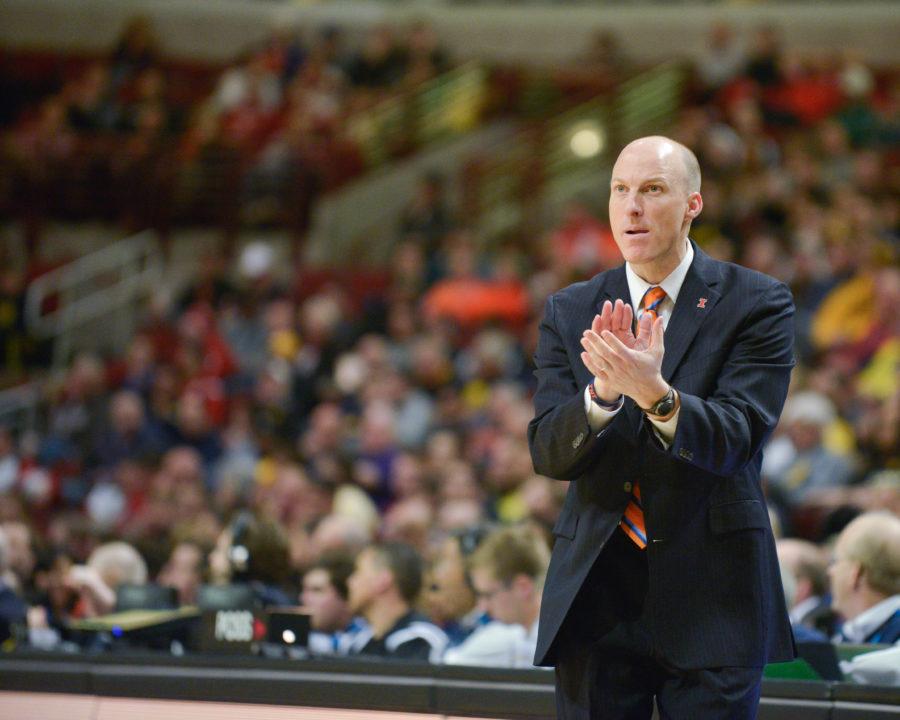 Illinois' head coach John Groce claps after a Michigan turnover during the game at United Center in Chicago, Illinois during the Big Ten Tournament on Thursday, March 12, 2015.

According to Groce, Black’s unofficial timetable is 4-6 weeks of recovery — he will have surgery Friday. Groce made the announcement as a part of his opening statement at Illinois basketball’s media day. If Black’s rehab falls on the later side of that prognosis, he could miss some early season games.

Black averaged 5 points and 4.3 rebounds for Illinois his freshman season.

Tate and fifth-year transfer Khalid Lewis are expected to share the point guard duties with Abrams sidelined for the year with a torn Achilles.

Illinois opens the season against North Florida on November 13.

Freshman Jalen Coleman-Lands is on track to return Nov. 1. Coleman-Lands has been sidelined with a stress fracture in his left leg.

The Illini head coach also had positive things to say about freshman D.J. Williams: Groce said Williams has the athleticism and skill set to play four positions — all but center — while at Illinois. Williams is one of three players on Illinois’ roster — the other being Kendrick Nunn and Tate — to play at Chicago’s Simeon Career Academy.

Groce said that he expects juniors Nunn and Malcolm Hill to emerge as team leaders this season, and added that his standard for them is “through the ceiling” this season. The pair are the team’s leading returning scorers: Hill averaged 14.4 points last season and Nunn averaged 11.1.

Nunn started 2014 on the bench, but ended up averaging 30.2 minutes per game. He’s also the team’s best returning 3-point shooter, making 38.9 percent of his shots from beyond the arc last season.

During his press conference, Groce mentioned recently graduated Illini Nnanna Egwu, who is playing with the Orlando Magic in the NBA.

Egwu was signed to the Magic’s training camp roster and will play in their preseason game Thursday night in Indianapolis against the Pacers.