Grading Illinois football after its loss to Iowa 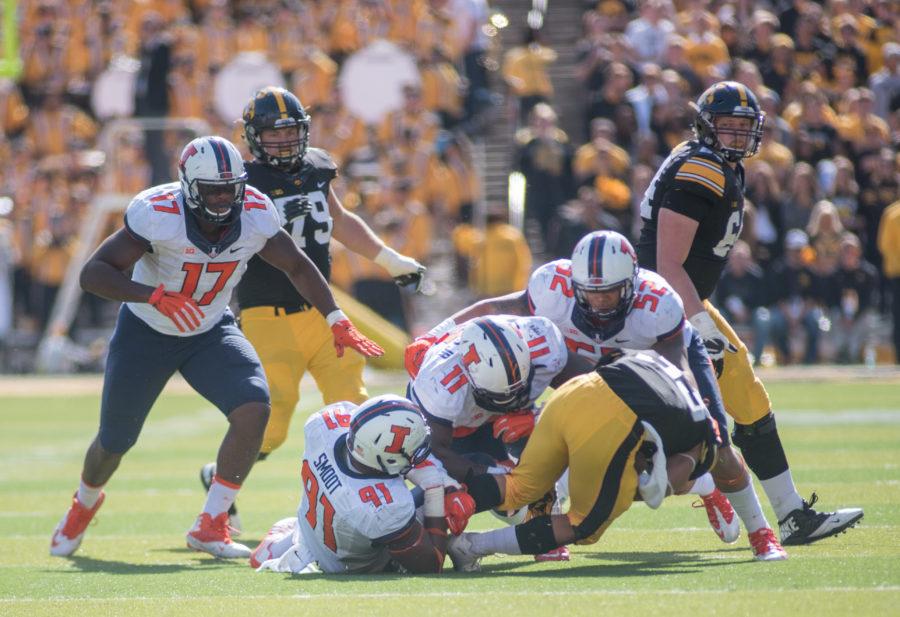 Without starting running back Josh Feguson and lacking depth at wide receiver haunted Illinois’ offense for much of the game. Quarterback Wes Lunt led Illinois on an impressive drive on the team’s second possession, throwing a 34 and 27-yard passes to Malik Turner and Geronimo Allison, respectively. The drive ended with a four-yard touchdown run by Ke’Shawn Vaughn.

Illinois would score one more touchdown in the game — a 53-yard Lunt pass to Allison in the fourth quarter — but sputtered in the red zone, knocking in two field goals. Sacks and false start penalities stopped the up-tempo momentum head coach Bill Cubit tried to create.

Vaughn ran for 67 yards and a touchdown but fumbled the ball in the fourth quarter after the Illini defense held Iowa to a field goal and kept it a one-possession game. Iowa kicked another field goal after the fumble, putting the game out of reach.

Illinois’ defense was a mixed bag Saturday. The line played its best game of the season. All of the linemen were aggressive and pressured Iowa quarterback C.J. Beathard all day. Beathard also took a lot of hits and said after the game that he’ll need some recovery time after facing the Illini. Jihad Ward led the team with nine solo tackles and Dawaune Smoot had the team’s only sack.

While the line played well, the secondary had a game to forget. Players had a hard time keeping up with their assignments when Beathard extended plays outside the pocked — he threw a 49-yard pass and a 46-yard pass on two different third and longs. Iowa running back Jordan Canzeri scored on a 75-yard touchdown run and finished with 256 rushing yards.

Kicker Taylor Zalewski bounced back after missing two field goals against Nebraska. The senior made both of his field goal attempts and both of his PATs. He also limited Iowa’s kickoff return by sending almost all of his kicks to the back of the end zone.

Illinois also used the two-return men formation for kickoffs with both Bentley and Caleb Day. Bentley averaged 23 yards on his two returns while Day averaged 25.5 on two returns.

Bill Cubit ended his second Big Ten game as head coach with mixed reviews. The head coach adjusted during halftime after his team failed to flip the field for much of the first half. Illinois’ offense changed to up tempo at the start of the second half and moved the ball down the field, successfully using a flea-flicker to keep the Iowa defense on its toes.

The head coach got little too fancy with his play calling. He had Allison attempt a pass on third and short in the fourth quarter and his top receiver threw an interception on a drive where the Illini could’ve regained the momentum.

He also ran the same bubble screen to Vaughn for most of the game — the Hawkeyes adjusted and on one of the plays hit Vaughn so hard that the freshman running back needed medical attention before coming back into the game.