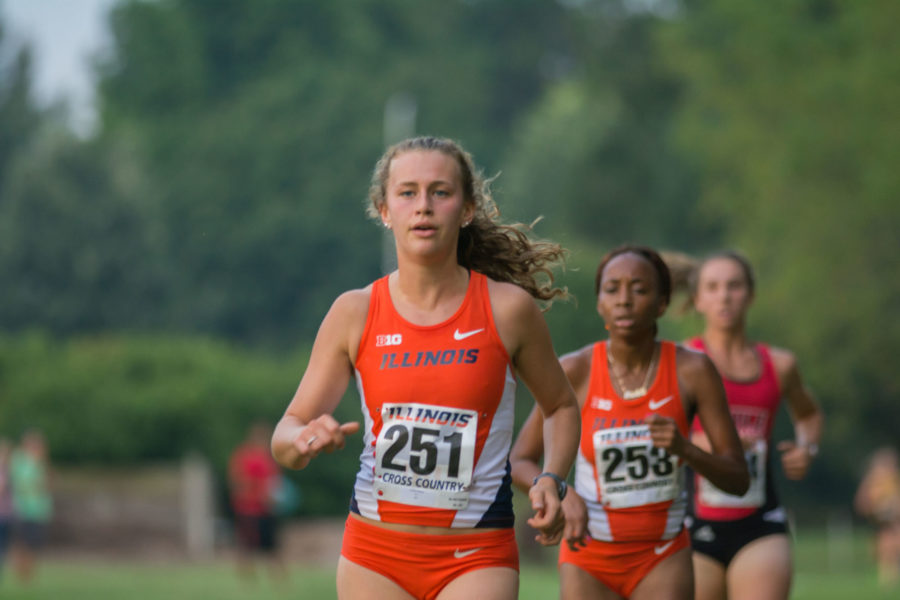 Audrey Blazek(251) and Denise Branch(253) keeping their pace steady at the Illini Challenge 2015 at the Arboretum on September 4.

The Illinois women’s cross-country team had to work hard to get to the top-tier team race at this year’s Pre-Nationals meet.

After a solid performance at last month’s Roy Griak Invitational in Minneapolis, Minnesota, the Illini qualified for the top-tier race to compete against higher-level competition. Louisville thought that the Illini’s performance at Griak was enough to get into the race with the better teams.

Some of the best teams in collegiate women’s cross country competed in this year’s meet, like Oregon, Georgetown, Michigan, Colorado and Stanford.

“I think we were disappointed,” head coach Scott Jones said. “I thought we had higher aspirations. It wasn’t the effort that I was disappointed, it was more the outcome.”

The team was led by junior Hanna Winter, who completed her best race of the season, finishing in 21 minutes and 30 seconds, good for 161st place.

Jones said that Winter was comfortable in the racing environment and passed 57 people in the last half of the race. He said that she handled herself well throughout the race.

Second to cross the finish line for the Illini was junior Audrey Blazek with a 21:46.

Senior Valerie Bobart and junior Britten Petrey were next to finish for the team, posting a 21:47 and 21:54, respectively.

The final runner to complete the race for the Illini was junior Kim Seger, posting a 23:11.

Redshirt senior Alyssa Schneider, the team’s leading runner who has finished first for the team in all of their races this season did not run on Saturday. According to Jones, Schneider was held out for precautionary reasons, understanding that more meaningful races are ahead for her.

Jones said that the environment may have been a factor in the “disappointing” outcome. The course was different than the Griak Invitational, and there were far more quality teams.

The Illini will host the Illini Open next week on Friday, October 23, where they came in first out of seven teams. This which will be their final race before the Big Ten Championships on Nov. 1.