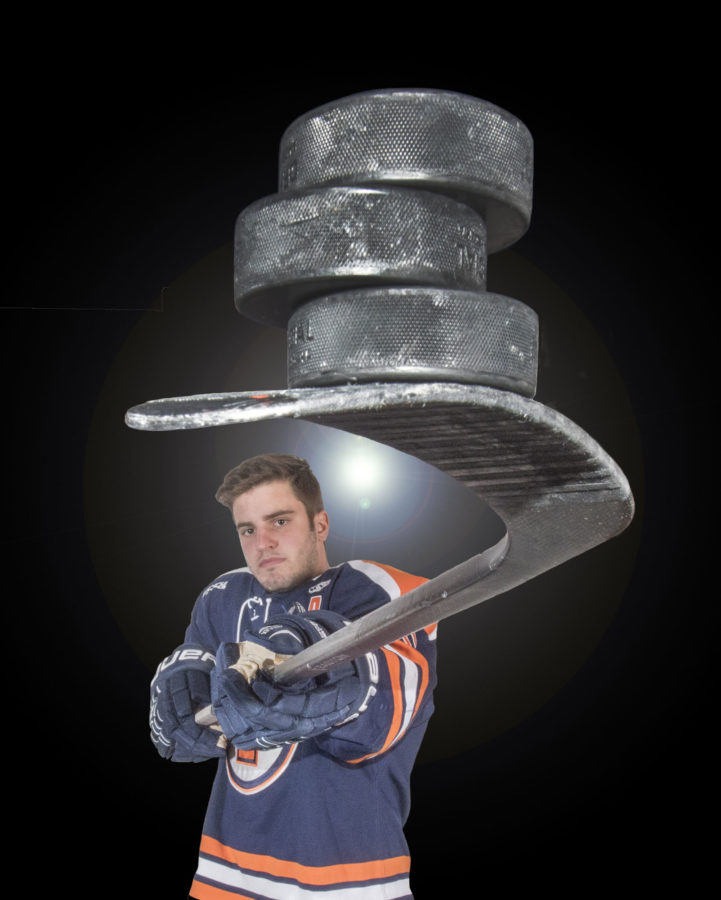 If Eric Cruickshank hadn’t been involved in Illinois hockey’s weekended series versus Robert Morris, the Illini would have gone 0-2 instead of 1-1 against the Eagles.

The sophomore scored a hat trick and assisted on the other in Saturday’s home 5-3 win after scoring the lone Illinois goal in Friday’s 4-1 CSCHL opener.

“It was just one of those nights where the puck was bouncing the right way for me,” Cruickshank said. “I have to give credit to my line mates; without them, it wouldn’t have been a hat trick game.”

Cruickshank leads the Illini in goals (7) and total points (11), but what is even more impressive is how Cruickshank ranks on a conference and league level, and what type of season the sophomore seems primed to have considering the Illini’s early injury situations.

Cruickshank came to Illinois last year a well-seasoned player. Two years out of high school, he had stints with both the Janesville Jets and Minnesota Wilderness of the North American Hockey League. In 2012-13, Cruickshank played in 45 games for the Jets, tallying two goals and six assists. But a dismal 2013-14 season with the Wilderness — he played in two games all season — propelled Cruickshank to the college ranks.

As a freshman, Cruickshank made an immediate impact; the then 20-year-old rookie was second on the team in points with 32 points on 13 goals and 19 assists. Illinois head coach Nick Fabbrini knew he would be the centerpiece of the Illini’s offense.

“(Cruickshank) spent a lot of time on the ice this summer,” Fabbrini said. “When a couple a great work ethic with a high skill level, you’re bound to do some things.”

With John Olen out for about a month with a broken ankle, Cruickshank’s numbers could be inflated even more now that he is now one of the team’s only scoring threats. Coupled with experienced line-mates James McGing and Grant Stueve, combining for 11 assists thus far, Cruickshank easily gets the puck in scoring opportunities.

“Stueve has the intelligence, hockey IQ, moves his feet and we just know where each other are on the ice,” Cruickshank said. “McGing is easily our best guy in the corners, he can always turn nothing into something and give you the puck when you think he can’t. Our line has been clicking all year.”

Cruickshank’s 11 points rank fourth in the CSCHL. He ranks just outside the top 50 in ACHA scoring nationally.

With the sophomore’s seven goals and four assists over seven games played, Cruikshank is on pace to score at roughly 38 goals and 22 assists in the regular season. A 60-point regular mark would have eclipsed Joe Olen’s team-high 41 last season and ranked Cruickshank fifth in the entire ACHA.

Cruickshank isn’t likely break any Illini single-season records, thanks to the gaudy numbers posted by Mike Goldberg 1988-89 —scoring 58 goals and 43 assists in just 27 games — but in his second season, the Illini left wing seems very likely to have a career year.

“Personally, I don’t set numbers in the preseason that I want to reach,” Cruikshank said. “When you try to lead the league and care too much about your scoring, that’s when selfish players arise. Whether its scoring goals, making plays, blocking shots — whatever it means to make us successful: that’s the plan.”