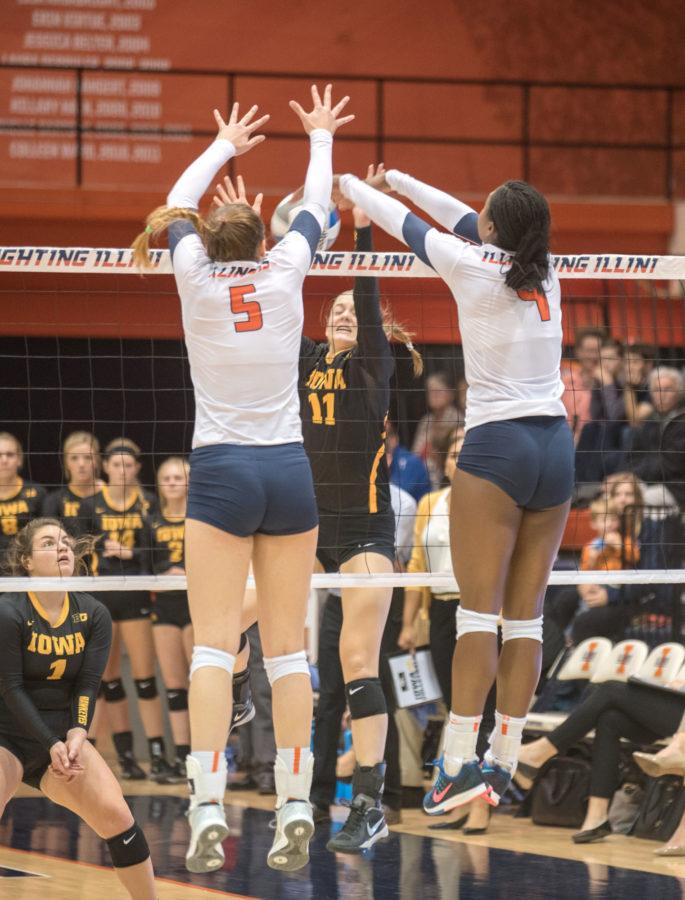 Crittenden was a track star whose athleticism carried over naturally when she made the switch to volleyball. Four years later, the junior opposite hitter is now a key player on the No. 18 Illinois volleyball team.

Crittenden played sparingly over the first half of the season, but head coach Kevin Hambly has increased her minutes over the past four matches due to her strength and physicality.

In a 3-0 sweep of Iowa on Friday night, Crittenden finished with 10 kills on 14 total attacks, and two errors — good for a team-high .571 hitting percentage. She followed that performance with nine more kills and a .368 hitting percentage against No. 3 Nebraska on Saturday night.

The Oregon transfer is settling into her increased role with 12 regular season matches remaining on the schedule. Crittenden hadn’t hit better than .273 in any of the 11 matches that preceded Iowa and Nebraska.

At 6-foot-2, Crittenden can read her opponents’ next move before it happens. She possesses the handy combination of vision and power, allowing her to hammer kills and come up with blocks from her position on the right side of the court.

“I like (Crittenden’s) physical presence,” Hambly said. “When she puts up a block, it’s different than everyone else.”

But Crittenden said she feels her biggest contribution to the team is her energy — an asset that proves to be contagious at times.

“I would want to be a leader — I would definitely say I’m more of an emotional leader right now, just wanting the team to always have that fight in them and that energy and that drive,” she said.

Emotional investment has become a theme for the Illini this year. The Big Ten is the nation’s best volleyball conference with eight schools in the top 25, and every match is a battle.

“Something that’s a key component to a winning team is its emotion,” Crittenden said. “I’m always that person that brings attitude up when we talk about things we can get better at. And of course, there are things that I still need to improve on attitude-wise, as well.”

That determination, that never-give-up attitude, is something Hambly has harped on at every turn. Hambly wanted to see more scrap out of his team against Nebraska.

“I think the challenge was that we weren’t fighting the way we wanted to fight,” Hambly said. “It’s a process of getting better — we got a couple things out of the way, I hope. And then we see if we can clean some things up and be better at the end of games.”

Crittenden said that even during pre-conference games while she was still at Oregon, she noticed the difference in energy that Big Ten teams played with.

“They always have that in the Big Ten, and so that’s one thing we have to match with our opponents,” she said.

After back-to-back losses to No. 5 Penn State and No. 6 Ohio State, Illinois watched game film of its botched opportunities — missed free balls, over-passes and missed digs.

“Any little thing that could’ve helped us score a point in certain plays where it was like — we should’ve got that point and we didn’t because of this, or this,” Crittenden said.

The Illini cleaned up many of those plays against Iowa and Nebraska. So this week, Hambly showed the team tape of those improvements.

Still, according to Crittenden, the fight needs to be there this weekend against Purdue and Indiana.

“Putting our energies together can really give us that extra push that we need to finish out these games.” fm