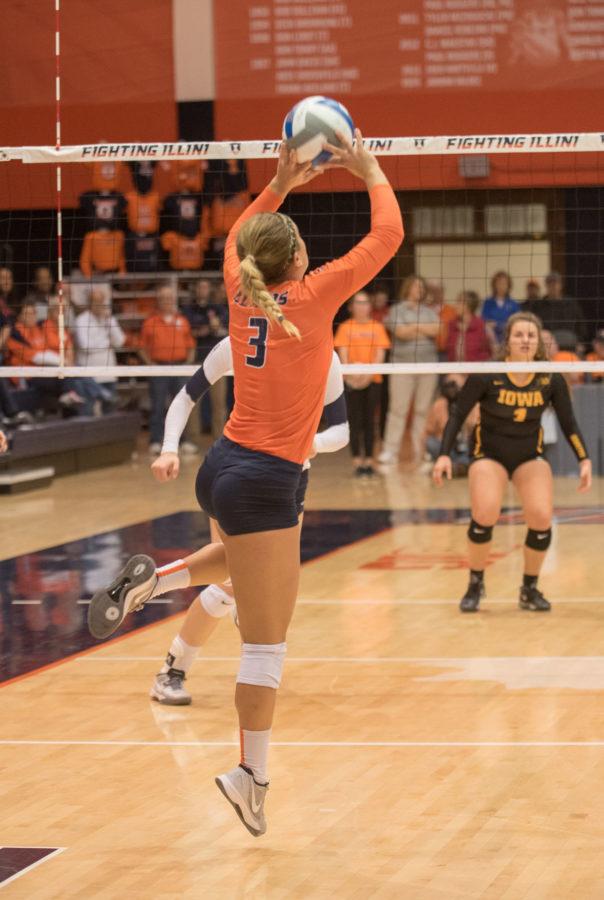 Brandi Donnelly sets the ball during the game against Iowa at Huff Hall on Friday. Illinois won 3-0.

There’s no rest for weary volleyball players, especially not in the Big Ten.

After a 3-0 loss to Nebraska Saturday, the No. 18 Illini (12-7)JT is looking to bounce back in their two matches slated for this weekend. Friday night, Illinois faces Indiana (12-8)JT before traveling to No. 19 Purdue (15-4)JT for a noon Saturday tilt.

Illinois is 3-5 in conference play and has now lost five of its past six games after splitting matches against Iowa and Nebraska. Indiana is up next, and like the Illini, the Hoosiers have struggled against Big Ten opponents — they’re losers of four straight and six overall in the conference.

He described the Purdue match by saying, “that’s always gonna be a battle” and went on to mention the Boilermakers’ size, physicality and athleticism as key pieces to watch for.

Those attributes are found on nearly every team in a conference that boasts eight schools in the NCAA Top 25.

Ahead of their sole matchup of the season, Hambly gave credit to Purdue’s head coach Dave ShondellJT for figuring out how he wants to use his various weapons. Hambly said Shondell doesn’t recruit to his specific system, he just recruits the players he wants, and the system changes every year.

“We’re in the process of figuring (Purdue’s system) out, but we know they’re gonna be big and physical and they’re gonna defend,” Hambly said. “Usually our matchups are low-efficiency, grind-it-out battles, and I expect that again.”

The Illini are 44-38 in all-time matchups with the Boilermakers. When asked if there’s something a little “extra” in terms of competition between Illinois and Purdue, Hambly noted the proximity between the two schools. Purdue is an hour-and-a-half bus ride away from Champaign.

Junior opposite hitter Naya Crittenden has seen an increase in playing time over the past two weekends, and she feels the 12 remaining regular season matches will come down to “how much everyone wants it.” She said sometimes, certain players play with energy and heart, while others on the floor may leave something to be desired.

“The biggest thing we need is just that extra push of energy from everybody on the team,” Crittenden said.

Libero Brandi Donnelly will look to spearhead a strong defensive effort against Indiana and Purdue. Donnelly has 300 digs in 66 sets this season, good for 4.55 digs per setJT. Defensive specialist Julia Conard, whose playing time has jumped in recent weeks, will also need to contribute for the Illini to play well.

No. 5 Penn State and No. 8 Ohio State attacked the Illini defense with vigor at Huff Hall Oct. 9 and 10JT, respectively. The Illini played a lot better on the defensive end this past weekend, as opposed to the lackluster performance from two weeks ago.

“Nebraska is a good offensively balanced team, a team that would normally present some problems for us,” Hambly said. “We did a nice job of stopping them. They hit a good number in the last set, but we defended well and our blockers got better. We’re headed in a good direction defensively.”